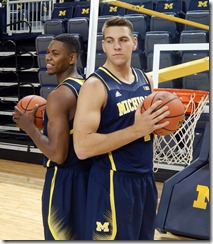 When Mark Donnal walked into the gym, a wide-eyed freshmen about to embark on his college basketball career, Mitch McGary remembered the feeling. Probably because it hadn’t been that long ago since McGary was that wide-eyed freshman.

In fact, it was only one year ago.

This is the role Michigan’s sophomores find themselves in this season — second-year players who must act like aged veterans with their freshmen charges. It’s a quick study in mentorship, and John Beilein likes what he’s seen from his young leaders.

“It’s just giving Mitch a great opportunity to help coach Mark Donnal, and he’s been doing so in practice so that’s really good for us,” Beilein said during his press conference during Michigan basketball media day on Thursday. “Glenn (Robinson) has really stepped up from a very quiet leader and taken in so much information trying to figure out himself to be able to give some of that same knowledge over to Zak Irvin. And then Spike (Albrecht) is doing the same thing with Derrick (Walton). They’re partnered up pretty well, and it’s nice to see that type of attitude.”

McGary in particular has embraced his role as teacher to Donnal, and it appears teacher and pupil make a perfect match; while McGary was more heralded coming out of high school, Donnal possesses a similarly versatile game and passing vision. What he has traditionally lacked is aggressiveness, something McGary has in abundance.

One thing’s for sure — McGary isn’t going easy on Donnal. While he sees a lot of skill in the young big man, he acknowledged there is still much work to be done.

“I think he’s got a little more to work on,” McGary said. “He’s a project, for sure. He’s great, actually. He’s becoming more and more involved every day and getting better every day. He just needs to grasp an understanding of our offense and what coach Beilein asks of him and he should have a good input on this team this year.”

Part of the reason McGary is so able to mentor Donnal is because of his own inactivity due to his lower back injury. The injury has relegated him to the role of “assistant big man coach,” which makes his boss Michigan assistant coach Bacari Alexander.

While Alexander said he likes having McGary on staff, he’s hoping the big man can shed the “coach” role soon.

“Most young guys are looking for validation, and any time you can have a guy who just came off an NCAA Final Four championship game experience, it not only spikes the confidence in a young person, but it also says we have people we can lean on as veterans that will allow us to interpret the day-to-day grind of being in college,” Alexander said during media day on Thursday. “I think Mitch has done a particularly good job of that. Mitch’s assignment has been to coach Mark Donnal. And so, he’s kind of our big man assistant coach, and hopefully we can strip that title away from him soon.

“Mitch McGary is a giver, not a taker. And he’s always trying to find ways, even in a limited capacity, how can I help this team get better? Which is the ingredient as to why we were able to make such a run — because he has that team spirit.”

But of course it isn’t just McGary who has embraced the role of mentor. In the course of competing with each other, Albrecht has at times acted as teacher to freshman point guard Walton, and the same can be said for Robinson and Nik Stauskas and their relationship with Irvin.

Albrecht said he has been impressed with the freshmen and their willingness to learn — however, he added, it’s necessary for survival in the college game.

“There’s so much thrown at you as freshmen, if you’re not willing to look at guys to help you out, you’re going to struggle,” Albrecht said. “They’ve done a great job so far. It’s been a good preseason so far.”

While the sophomores have been embracing their new leadership roles, some of the elder statesmen on the team have been revising theirs. Jordan Morgan and Jon Horford, the presiding experts when it comes to how Michigan has systematically built its culture over the course of Beilein’s tenure, have of course done their part in lighting the way for the young players.

When Irvin was asked who has been helping him out the most in his transition from high school basketball to college, he didn’t hesitate.

“Definitely J-Mo and Horford. They’ve been here a while and they know how the game goes,” Irvin said. “They just say to take it day-by-day and give 100 percent. We just have to stay focused and be ready for everything.”

It’s obvious the sophomores in particular are taking their newfound leadership role seriously — in fact, they’ve been cramming for it like any other college course. Robinson said he’d been reading books on leadership to better his skills in the area, knowing how important that role will be this season.

But again, the player who appears to have taken it the most seriously is McGary. His teammates have picked up on it, too.

“Every day in practice, Mitch is telling him something new, something different. I think that’s really starting to make him gain confidence,” Robinson said of McGary and Donnal’s interactions. “That’s really something that Mitch has done with Mark all preseason. So I think Mark’s definitely getting confident. He’s shooting the ball well and he can help us.”