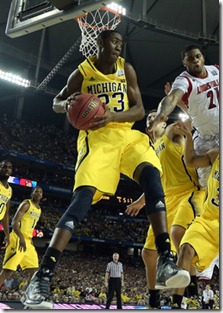 Since Caris LeVert stepped foot on campus and throughout last season, Michigan’s coaches have sung the praises of the sophomore’s defensive ability. Citing his long limbs and quick feet, John Beilein and his assistants felt as though they had a player who could guard any perimeter position.

As a rail-thin freshman last season, LeVert wasn’t bad defensively in his limited role, but he wasn’t that good, either. This year, with over 20 pounds of added muscle and a full year of experience under his belt, LeVert is expected to play a major role for the Wolverines. And defense where the coaches expect his presence to be felt the most.

When John Beilein was asked about who would take on the role of “defensive quarterback” for his team this season, he was effusive about LeVert’s ability to fill that position.

“Caris has really taken on that role,” Beilein said at Michigan’s Media Day on Thursday. “If you see Caris for a few minutes, you’ll see what he’s doing. Last year I think he played 6-to-10 minutes, and this year he’ll play a lot more minutes than that. You could put a defensive team out there that is really good. So when we do that, we better be better, because you act like you may give up some offensive things, who knows? We can put four or five guys out there that can really guard people.”

So what is it that makes LeVert such a threat defensively? Simply, he’s a matchup nightmare. There has been talk of LeVert playing some lead guard this season — if he can keep up with opposing point guards defensively, and the coaches believe that he can, then he can make life very difficult as a 6-foot-6 perimeter player.

At the same time, his long frame allows him to guard bigger players and use his quickness to stay in front of them. Michigan assistant LaVall Jordan thinks LeVert will be tasked with guarding a wide range of positions.

“The first thing is that he’s long. He’s got long arms,” Jordan said. “Maybe they just look longer because he’s slim. But he’s long and he’s got really quick feet for his size, so he can guard smaller guys. And he’s tough. He can guard some bigger guys at a bigger position.”

There are plenty of players to be excited about this season — notably Michigan’s two likely lottery-bound sophomores, Mitch McGary and Glenn Robinson III — but at Media Day it was difficult to find a player around whom there was more buzz within the program. Players and coaches alike are excited about LeVert and the progress he’s made.

“You look at our two-guard set, I mean we’ve had years where the off-guard had more assists than the point guard,” Beilein said. “Whether the forwards are mirrors or the guards are mirrors, it depends on who you’re playing, what the pressure is like, who we would put in there. You could go out there with a 6-6, 6-6, 6-6, 6-6 and a big guy, that’s very possible.”

On the topic of LeVert playing the one, what many people forget is that LeVert played point guard for the majority of his high school career. LeVert had a growth spurt later in high school and was then moved to the off-guard or forward positions. His basketball career started as a point guard and there were points when he would take over lead guard duties for Pickerington Central high school as recently as his senior year.

“Caris was a small guard his freshman and sophomore year,” Jordan said. “He was a point guard, and then he grew in the middle of his high school career and then he had to play some point in late-game situations as a senior. You knew he had the ability — at least it wasn’t foreign to him. And now, based on what we do, could he handle those duties and responsibilities? Last year, every now and again, when he was on the second team, we messed around with it and saw how he did. Obviously he talked to Trey a lot and Tim, who played up there. It’s just developing a comfort level, one, and then developing an understanding of what coach Beilein wants, knowing where everybody’s supposed to be, knowing his responsibilities and theirs, that’s the next-level progression.”

The progression of Caris LeVert will undoubtedly play a huge role in Michigan’s success this season. If the hype surrounding his game is justified, it opens up all sorts of tantalizing possibilities for Michigan, both offensively and defensively.

We didn’t get to see much during practice on Thursday, but there was one drill in which LeVert sprinted from the free throw line to provide help defense on a driving Sean Lonergan. LeVert pinned Lonergan’s two-handed dunk attempt against the backboard and the rest of his team went nuts. It was a first-hand look at what LeVert is capable of, and though it was just a glimpse, it could be a sign of good things to come.

The players have certainly taken notice. At least Robinson has noticed a welcome trend when LeVert is on the court.

“He’s gotten a lot stronger, quicker,” Robinson said of LeVert’s progress. “He’s gotten tremendous confidence in his game. He’ll definitely help this team out a lot this year. I’m excited to be on the floor with him.

“Every time he steps on the floor, our defense tends to become better.”