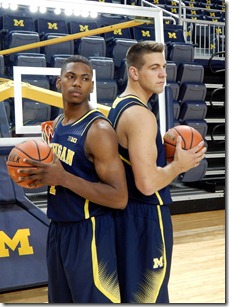 Who was Michigan’s best player this summer?

Donnal didn’t get a chance to see Robinson’s abilities firsthand last season but they are no secret. Now everyone is waiting to see if the Michigan’s 6-foot-6 sophomore can elevate his game. Robinson is jumping higher (reaching 12-foot-3). He’s shooting the ball better. His ballhandling has improved. And this is all from a guy that would have been a top-15 pick had he declared for the NBA Draft last spring.

“I’ve gotten stronger, I’m shooting the ball more efficiently, I’ve worked on my ballhandling skills, and most of all, most important to me is my leadership,” Robinson said. “That’s something I want to continue to stress to this team and I’m willing to help out and do whatever I can to make sure I’m a leader for this team. Hopefully we can get the same thing done this year as last year.”

Michigan has experience in the rotation with Jordan Morgan and Jon Horford but the star players on this roster are the sophomores. Robinson and Mitch McGary are future pros, Spike Albrecht was the surprise tournament star, Nik Stauskas started every game and Caris LeVert is reportedly the most improved player on the Michigan roster.

Having talented sophomores is great but sophomores that can lead are a rarity. Robinson is taking the challenge in stride.

“I’ve been reading books, I’ve been talking to the coaches about leadership and some of the past players, Josh Bartelstein, Eso [Akunne], those guys,” Robinson explained. “I was a leader in high school because I had to be. That was kind of a role that I learned to take. It’s similar this year. I did fall back a little bit last year because we had all those great leaders, it wasn’t really as needed as it is this year.”

John Beilein recognizes the sort of weapon that he has in Robinson and needs to find ways to utilize him more than he did last season. While his talent was never in question, he was almost always a complementary player to Trey Burke, Tim Hardaway Jr. and even Mitch McGary last season.

“The things he is doing right now with his game are things that he never even dreamed of doing last year. We’ll continue to experiment with what’s best for him. I’ll make a comparison with football, you’ve got a guy like MegaTron (Calvin Johnson) and you’ve got a guy like Barry Sanders,” Beilein said. “You might throw MegaTron the ball seven times a game, but he may score three touchdowns. Barry Sanders might have the ball 30 times a game and he might score two touchdowns. It’s the same thing, so whether he [Robinson] is playing with space or playing with the ball, he’s basically important to everything that we do.”

Robinson is such a special finisher of plays that it’s important not to take him out of that role. He was among the most efficient players in the country cutting to the basket last season and he consistently finished alley-oops and bounce passes in transition for easy buckets. Michigan still needs him roaming the baseline providing an outlet when Derrick Walton gets in the lane. The key for Michigan is getting him involved in other ways without taking him out of the spots that he’s already proven to be so lethal.

“We have different guys, but similar to Trey in that they can create offense. Derrick, Spike, they can help me create a lot of offense,” Robinson said. “But at the same time, I’ve been seeing a lot more ball screens and pick-and-rolls in practice. I’ve been working with my team to improve my game, in the one-on-one skills.”

Robinson used just 15.4% of Michigan’s offensive possessions while he was on the floor last season – less than everyone other than Caris LeVert and Spike Albrecht in Michigan’s rotation – but he was the 10th most efficient player in the country. There’s room for Robinson to do more.

With Michigan losing roughly half of its offense from last season, Beilein was quick to point out that “there’s 25 shots and 75 minutes out there for people”. The opportunity is there and there are a number of candidates to take on increased roles including Stauskas, McGary, Irvin and LeVert. But Robinson, the most efficient player from the most efficient offense in the country last season, is an ideal candidate for an increased role.

The talent and the opportunity is there but Robinson will be put to the test this season. The unknown might be unnerving to Michigan fans that aren’t sure if he’s up to the challenge but the unknown of just what he could become should be equally nerve-racking to opposing fans. Robinson, unlike the rest of Michigan’s roster, has no ceiling.