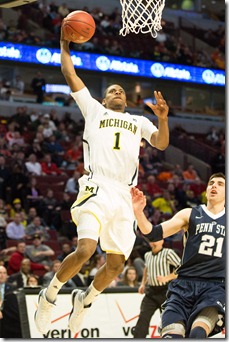 When asked about the starting lineup, Beilein was his usual, playfully cagey self.

“We’ll determine that after the exhibition games, but we have a variety of people that probably could do that. We could go with some veterans, we could go with the freshmen,” Beilein said, smiling, during a press conference on Monday. “Spike or Derrick will play at the point, Nik or Caris will play at the two, Glenn or Zak will be at the three, and at the other three it will be Jordan or Glenn. Jon’s played real well, too. Jon’s going to get a great chance.”

So, according to Beilein, eight of Michigan’s 11 scholarship players could start. Good to know.

But of course, given that Concordia is Michigan’s first game of the exhibition season, it is truly of no consequence who starts the game — rather, what Michigan coaches will be looking for is which lineup combinations work smoothly together in a game situations. Much has been made of Michigan’s versatility and the vast possibilities of different lineups. On Tuesday, Beilein finally gets to play chemist in a live game situation.

For the coach, the Wolverines’ exhibition matchups are really all about seeing which players work well on the court together. He said he doesn’t anticipate gathering anything more about his team than that.

“Allowing us to get an early start on practice, allowing us to coach them in the summer, this is a point now where everyone’s had great opportunities,” Beilein said. “It’s a lot about personnel decision right now and what group fits together. So it will be more about that. It won’t be, exactly, what are our strengths and how are we going to play? I think that goes through February, you’re still trying to figure out what works best as the reports go out and the Synergy numbers go out, what works best both offensively and defensively.”

Beilein did mention one hope he has for the game on Tuesday: preferably, he would like to get the freshmen in for at least half the game.

“We’re hoping that in the exhibition games we can get them in for at least half the game if you can,” Beilein said. “That’s always a challenge depending on the score and depending on foul trouble for them or others. We want to get them out there and get them as comfortable as we can in these two games. They are important to this season.”

With two capable point guards on the roster, you’d figure Michigan’s top assist-getters during preseason scrimmages would be either Spike Albrecht or Derrick Walton. Both are known for their passing ability and both have plenty of talent.

However, Beilein revealed the surprise assist leader in early season scrimmages: Glenn Robinson III. It appears the player who was derided at times last season for not being able to create his own offense isn’t only creating his own opportunities, but creating offense for others as well.

“Glenn is one of our top assist guys in all the scrimmages thus far. A lot of times we’ll just let them play, and allow them to play to the vision and strengths that they have,” Beilein said. “He’s got an ability to play where he can see open men really quickly. You see a lot of kids who, for some reason, while they’re athletic, don’t have the same feel for the game in crowds.”

As always with the Michigan coaching staff, it’s not just about the sheer amount of assists — it’s about how those assist numbers compare with your turnovers. Beilein estimated that Robinson has about 28 assists over the scrimmages compared to only five or six turnovers.

But Robinson isn’t the only player whose passing ability has stood out. Caris LeVert also has favorable assist numbers, and it’s a big reason the staff has hinted at LeVert seeing minutes at lead guard throughout the offseason.

Overall, Beilein has one message for all his passers: Turnovers are bad.

“They’re all learning how this coaching staff hates turnovers,” Beilein said. “They understand that. When they know the success we had last year, and that we led the country in not turning it over, they can sort of put that together themselves.”

During his talk with the media on Monday, we got a pretty good idea for what Jordan Morgan’s offseason looked like: First, came the rehab of his injured ankle and other bumps and bruises incurred along the way from a long season; then came the refining of skills like free throw shooting and honing his midrange jumpshot while his ankle was still healing; finally, regaining his explosiveness and strength while working on rebounding and finishing.

Beilein, for one, has seen the fruits of Morgan’s labor over the offseason.

“His body is probably in the best shape it’s been in. And he has shot the ball in preseason, very well,” Beilein said. “Where maybe he turned down a 12-footer or a 15-footer weeks before, he has not turned those down and he has been successful with those many times.”

But as it always is for Morgan, what he really wanted to talk about was how much he’s grown as a teammate, rather than any specific area of his game he’s improved on.

“To be honest with you, I think this year I’m just more focused on being a great teammate,” Morgan said. “That’s really all I’m focused on. Of course, there was a long offseason and a lot of time to put work in and improve in areas I felt I needed to, but I feel that the most important place I grew was in my leadership. I just continue every day to be a better leader and a better server for my team. I just serve my teammates in any way possible.”

Notes: Mitch McGary will not play in the exhibition game on Tuesday against Concordia and there is no target date for his return. … When asked if freshman Mark Donnal will redshirt this season, Beilein said those decisions will be made after the exhibition season.