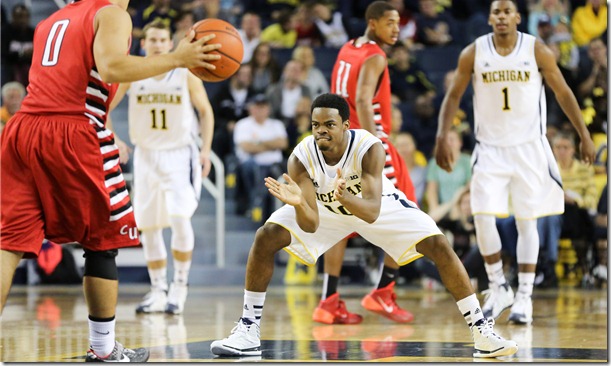 Michigan breezed to a 117-44 exhibition win against Concordia on Tuesday night to kick off its 2013-14 campaign. The Wolverines couldn’t have played much better in an empty gym as everything went right in their first live action since the Final Four.

There were fresh faces but the results looked eerily similar to Michigan’s sterling start to last season. The Wolverines forced turnover after turnover and pushed the pace for easy baskets. Michigan shared the ball, knocked down open shots and looked the part of a top-ten team against a very overmatched opponent. And they did it all without Mitch McGary, who remained sidelined (nice suit) with an undisclosed back injury.

Turnovers were Concordia’s undoing as it coughed the ball up nearly once every three possessions. The Cardinals’ 23 turnovers led to 38 Wolverine points and Michigan’s talented wing players finished relentlessly against an undersized Concordia frontline.

The tempo free numbers are as lopsided as the final score. Michigan’s offensive stats were nearly flawless: 74 eFG%, 8.2% turnover rate, 41% offensive rebounding rate and a 52% free throw rate. Add it all up and the Wolverines scored 117 points on 73 possessions, 1.6 points per trip, despite missing their last five field goal attempts once the freshmen walk-ons checked in. There’s no room to nitpick Michigan’s offense as the Wolverines scored 50 points in the paint, 22 points in transition and had an impressive 26 assists to just six turnovers.

Michigan’s defense was active, especially on the perimeter, and overwhelmed Concordia with its length. As previously mentioned, the Wolverines forced 23 turnovers, 10 of which were live ball steals. There were a few typical early season missed rotations and close outs, especially from freshmen, but overall the defensive performance was about all that can be expected in a blowout exhibition win. Concordia simply didn’t have the talent to compete and the shooting, free throw and offensive rebounding numbers all reinforce that fact.

Concordia was an average NAIA team last year and there’s not much real information to pull out of a blowout exhibition win. Games against Wayne State, UMass-Lowell and South Carolina State probably won’t tell us much either but they are necessary to get this team prepared to travel to Ames in just over two weeks. From that point on, this team is going to be tested regularly leading up to Big Ten play.