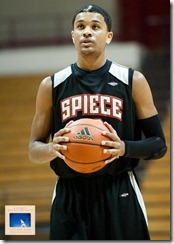 Devin Booker and James Blackmon Jr. haven’t declared dates for their college announcements but they could come as soon as this week. Both prospects plan to sign in the early signing period and both prospects have completed their college visits.

Blackmon took official visits to Kentucky, Indiana and Michigan over the last month. His most recent official visit to Indiana, where he was originally committed, took place over the weekend. Blackmon visited on Friday and left on Saturday before Indiana’s exhibition game. He hopes to make his college decision this week.

Blackmon is considered a Kentucky lean. His father played for the Wildcats and Blackmon visited Lexington for Kentucky’s Big Blue Madness earlier this month. Blackmon visited Michigan twice since he decommitted from Indiana this fall – unofficially for a football game August 31st and officially on September 28th.

UPDATE: Blackmon will announce this Thursday on ESPNU.

UPDATE #2: Devin Booker will announce at 4 p.m. on Thursday

98% of 247Sports’ Crystal Ball entries predict Blackmon will commit to Kentucky with just one prediction for Michigan.

Booker took his second visit in as many weeks to Missouri, visiting campus while his dad was honored with Missouri’s 1994 Big Eight Championship team. Booker was introduced with his father, Melvin, during the festivities.

Booker took official visits to Kentucky, Michigan, Michigan State and Missouri. While Michigan was considered the leader in Booker’s recruitment early on, Kentucky emerged as a favorite over the summer. Missouri pulled out all the stops over the last couple weeks and has made a late push for the legacy recruit.

Booker and Blackmon are the only recruits remaining on Michigan’s class of 2014 recruiting board with scholarship offers. The Wolverines have commitments from Kameron Chatman, recently ranked as the No. 55 player in the country regardless of class by Scout.com, Ricky Doyle, DJ Wilson and Austin Hatch. Michigan is also recruiting 6-foot-8 combo forward Jonah Bolden, an Australian transport who grew up a Michigan fan.