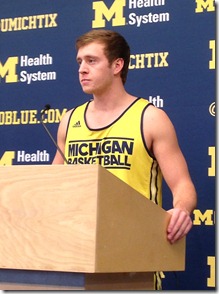 Michigan returns to the court for the first time since the National Championship game tonight in an exhibition contest against Concordia University. The game will be broadcast live on the Big Ten Digital Network at 7:00 p.m. and replayed on Thursday evening at 7:30 p.m. on BTN.

The Cardinals went 14-17 last season and previously faced Michigan in 2010 in an 86-65 Wolverine win that was close throughout much of the first half as Concordia big man Rocko Holmes scored 29 points.

Everyone will be watching to see who will get the first crack to replace Trey Burke. John Beilein won’t give away any clues as to whether it’s Derrick Walton or Spike Albrecht but both players will get their fair share of playing time. Don’t forget that Albercht started last year’s exhibition opener against Northern Michigan. He scored 16 points on 4-of-7 (3-6 3pt) shooting with six assists to just two turnovers in 30 minutes.

Rating each point guard’s debut performance will have to go beyond the numbers. A few things to watch: Who looks comfortable scoring the ball? Who looks more comfortable utilizing the pick-and-roll? Or in transition? There’s 160 minutes of live competition at the point guard spot before Michigan has to play a true road game at Iowa State. The competition may be lacking early on but every minute counts for something.

There hasn’t been quite as much buzz surrounding Michigan’s freshmen class as there was last season but Derrick Walton, Zak Irvin and Mark Donnal will all play. Beilein told reporters on Monday that he hopes to play all of his freshmen for at least half the game.

Irvin was Indiana’s Mr. Basketball last season and is the highest rated recruit in the incoming class. He should slot in at the three position early on and could provide an impact player on both ends of the floor. His ability to shoot off the dribble and his length defensively should both be assets early on in the season.

Donnal is a redshirt candidate in a crowded Michigan frontcourt. With McGary, Horford, Morgan, Bielfeldt and Robinson all capable of playing the frontcourt positions, it’s tough to find minutes for Donnal – not to mention that 6-foot-9, 230 pounds is a bit below playing weight for a big man in the Big Ten. Beilein will give Donnal an opportunity in the exhibition games before making a decision whether to redshirt his inside-outside big man.

Walton’s role has been covered endlessly. He’s competing with Albrecht for the starting point guard spot and is expected to play significant minutes throughout the season.

There’s been plenty of individual buzz throughout the offseason. Caris LeVert has been praised for his defense. Jon Horford is finally healthy and had an all-around solid summer. Jordan Morgan has improved his jumpshot. Nik Stauskas has added strength. Glenn Robinson III is ready to lead.

Up until now, that’s all talk. While a game against Concordia isn’t going to provide a legitimate test, it will still be the first opportunity to gauge Michigan’s individual improvement since April. New skills, roles and adjustments can be apparent even against weaker competition.

Is Jon Horford knocking down 17-foot jump shots? Is Caris LeVert comfortable using pick-and-roll? Those are things that wouldn’t have happened last year against any competition.

There shouldn’t be any last second heroics against a NAIA foe but there will be at least four or five late-shot clock possessions. Trey Burke and Tim Hardaway Jr. dominated the ball in those scenarios last year and no one on Michigan’s roster jumps out as a “go-to player” late in the clock.

Michigan will likely have a closer-by-committee approach, especially early on in the season. Watch not only who gets the ball in these situations but who looks comfortable. There’s a difference between taking a late-clock shot and wanting a late-clock shot. Michigan fans and coaches were spoiled the last two seasons by having Trey Burke on the roster, so this is a problem that will feel foreign early on.

Mitch McGary’s absence limits the number of lineup possibilities that John Beilein can work with but there should still be a fair amount of tinkering from Michigan’s head coach. Does Beilein opt to play two bigs like Jordan Morgan and Jon Horford together? Does Glenn Robinson III play more time at the three or four? Everyone will be watching for the Caris LeVert-Nik Stauskas backcourt which has been teased by Wolverine coaches throughout the fall.

There is plenty of flexibility on the roster despite its youth and there’s no better time to tinker than in an exhibition game.

Tonight’s game will be broadcast through the Big Ten Digital Network. The cheapest way for Michigan fans to access BTDN content is to subscribe to MGoBlueTV on a monthly basis. That package costs $9.95 and will include Michigan content only (which includes games against Concordia (ex), UMass-Lowell and South Carolina St.).If you are interested in watching games from other schools, the Big Ten Network sells a monthly $14.95 package. Subscriptions can be purchased here.