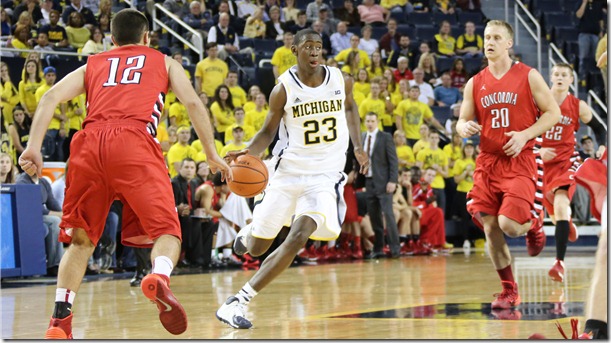 Considering the score of last night’s exhibition victory for Michigan, the only “key play” was Michigan showing up for the game. So in lieu of Five Key Plays, we’ll take a look at some takeaways from the lopsided 117-44 win over Concordia.

At the 16:27 mark in the first half, Derrick Walton stepped on the court as a Michigan Wolverine for the first time. And promptly took his worst shot of the night, according to John Beilein.

“He didn’t hit his first shot,” Beilein said after the game. “It was actually one of the few bad shots we took at the beginning.”

But it’s what Walton did after that first miss that impressed the coach.

“He hit his next shot and then he hit his next one,” Beilein said. “It’s usually a good sign when guys come off the bench and start shooting it right away.”

Walton appeared confident and fluid during his time on the court, eager to pass and quick on defense. Although slow on a few close-outs, the point guard appears to have the ability to stay in front of anyone.

The Detroit native’s impact on the game was quiet until late in the first half, when he put together a stunning run of plays. First, he knocked down a 3-pointer. Then, he hit a fallaway on the baseline under a minute later. On the defensive possession following that make, Walton stole the ball and cruised to the hoop for a lay-in. After the game, Walton assessed his play.

“I think I played fairly well for my first game,” he said.

John Beilein said Tim Hardaway Jr. and Trey Burke left about 25 shots per game in their wake when they left for the NBA — shot opportunities that are left for the remaining Wolverines to gobble up.

Glenn Robinson III feasted on them Tuesday against Concordia. The sophomore took 15 shots and made 12 of them. When Robinson wasn’t flying to the rim, he was letting it fly from beyond the 3-point line — he made four of his six attempts from deep, finishing with 33 points

“It felt great,” Robinson said of his shooting. “I told Spike [Albrecht], if you see me open, just get it to me. I’m feeling it right now. That’s what he did, he and Caris.”

But Robinson’s shooting wasn’t the only aspect if his evolved offense on display. He was playing mostly on the perimeter, handling the ball and creating shots in space. This was all according to plan.

“We’re trying to put him in so many situations, just playing ball but making the court real big for him so he can use that athleticism,” Beilein said. “He really is comfortable. You’ll see him on both sides of the floor. You’ll see him in the middle, you’ll see him all over the place. We all have known he can shoot it.”

In describing the team’s mindset going into this season, it’s evident Robinson was talking about his own personal mindset, as well:

“We want to dominate right from the start.”

This season, Michigan will be relying on him for scoring, rebounding and occasionally running point guard. A lot can change in one offseason, especially when a player puts in as much work as LeVert did. During Michigan’s exhibition win on Tuesday, LeVert finally got to show off the fruits of his labor.

The sophomore finished the game with 16 points, 10 assists, four rebounds and three steals in a little over 20 minutes. LeVert hit one 3-pointer, but most of his other points came off drives to the hoop.

“When you don’t have a lot of weight on your body, it’s not fun to go in and crash and go to the basket,” Beilein said of LeVert after the game. “I think he feels better that way.”

LeVert also showed off some improved athleticism, throwing down a couple of nice dunks on the fast break.

“That’s really a tribute to coach Sanderson, our strength coach,” LeVert said after the game. “I was really in there a lot this summer, working with him. That really helped us.”

Nik Stauskas is a more versatile player than last year

Nik Stauskas scored 24 points on Tuesday. Only six of them were from beyond the arc.

His box score was an indication of Stauskas’ improved versatility, as he manned ballhandling duties for much of the game and looked very comfortable creating opportunities on the perimeter.

According to Stauskas, that development has been a joint effort by him and Robinson.

“With Trey and Tim leaving, those were guys who got a lot of shot-clock plays, created off the dribble,” Stauskas said after the game. “Glenn worked a lot on his jumpshot in the offseason, and I worked on my jumpshot and getting to the basket. The fact that we were able to show that today is great.”

Stauskas was one of Michigan’s most efficient pick-and-roll players last season, and it’s clear Michigan coaches are going to try and place him in more of those situations. But it’s not just on offense that Stauskas appears to be much improved.

Often a liability on defense last season, the sophomore hopes to prove his defensive chops this year. He looked quicker on his feet against the admittedly far inferior Cardinals. That being said, Beilein has noticed a difference.

“Anybody who’s watched Nik can see that, like most freshmen who are now sophomores, he’s at a different level defensively,” Beilein said.