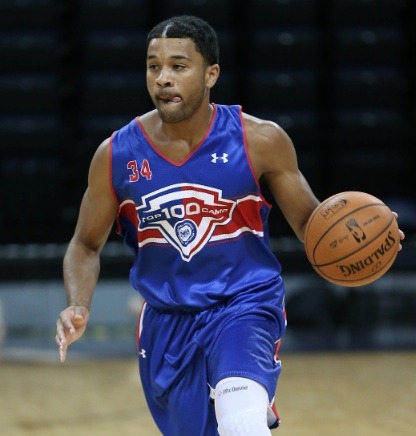 James Blackmon Jr. will announce his college decision this evening at around 9 p.m. at halftime of ESPNU’s Thursday night football coverage (the Louisiana Monroe-Troy game kicks off at 7:30). Here’s everything you need to know about Blackmon, the top remaining target on Michigan’s class of 2014 recruiting board.

James Blackmon Jr. has been rumored to want to follow in his father’s footsteps and choose Kentucky since he decommitted from Indiana.

Blackmon has done his due diligence in the form of unofficial visits to Michigan, Kentucky, Louisville, Indiana and Michigan State after decommiting from the Hoosiers. He followed those trips up with official visits to Michigan, Kentucky and most recently Indiana. It appeared the Wolverines could be on the verge of landing a commitment when the entire Wolverine staff made an impromptu in-home visit a couple weeks back, but those days appear to have faded after Blackmon’s Kentucky official visit for Big Blue Madness

For much of the last two months, the talk has been that Blackmon and Booker – arguably the top two shooters in the country – would attend different schools. That theory gave credence to the notion that Michigan would be able to land whichever prospect didn’t attend Kentucky. Could Booker’s commitment to Kentucky five hours earlier sway Blackmon?

It sounds like it might but not necessarily toward Ann Arbor. Word spread like wildfire throughout the day that Indiana could be inline to grab a recommitment from Blackmon. A lot of the speculation revolves around the rumors that Blackmon may have been recruiting other Indiana targets to come to Indiana. National consensus shifted as 17 pundits switched their predictions to Indiana on the 247 Sports Crystal Ball just one day after there was a consensus that Blackmon was headed to Kentucky. Scout.com’s experts also switched their picks to Indiana.

It appears there will be more drama tonight than we saw with Devin Booker’s announcement earlier but right now it would still be a shock if Blackmon chose the Wolverines.

Devin Booker will announce first, at 4:00 p.m. at his high school, and all signs point to him selecting Kentucky or Missouri. While Michigan was the favorite in his recruitment last year, the Wolverines slipped from that position this summer when Kentucky put on the full court press. Kentucky was (and probably still is) thought to be the favorite in Booker’s recruitment, especially after Booker’s official visit for the Wildcats’ Alumni game. Booker visited with his good friend, point guard Tyler Ulis, who committed after the trip.

Missouri is the team making a late push. The Tigers hosted Booker on campus twice in the last two weeks – once for his official visit and then again while his father and the 1994 team were honored. Michigan has hosted Booker nearly 10 times for unofficial visits as well as an official visit this fall. However, the allure of home (Booker grew up in Grand Haven and his mother still lives in Michigan) doesn’t appear to be as strong as it once was.

Booker’s announcement will be streamed live by SunHerald.com at 4 p.m. (eastern) right here.

Blackmon’s announcement will be around 9 p.m. (halftime of the Louisiana-Monroe vs. Troy football game) on ESPNU.

This post was updated at 7 p.m. on October 31st