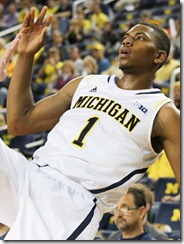 Michigan was picked to finish second in the Big Ten this season at the conference’s Media Day in Chicago, Illinois. The Wolverines were picked behind unanimous conference favorites Michigan State and ahead of Ohio State.

Michigan State sophomore Gary Harris was selected as the conference’s Preseason Player of the Year.