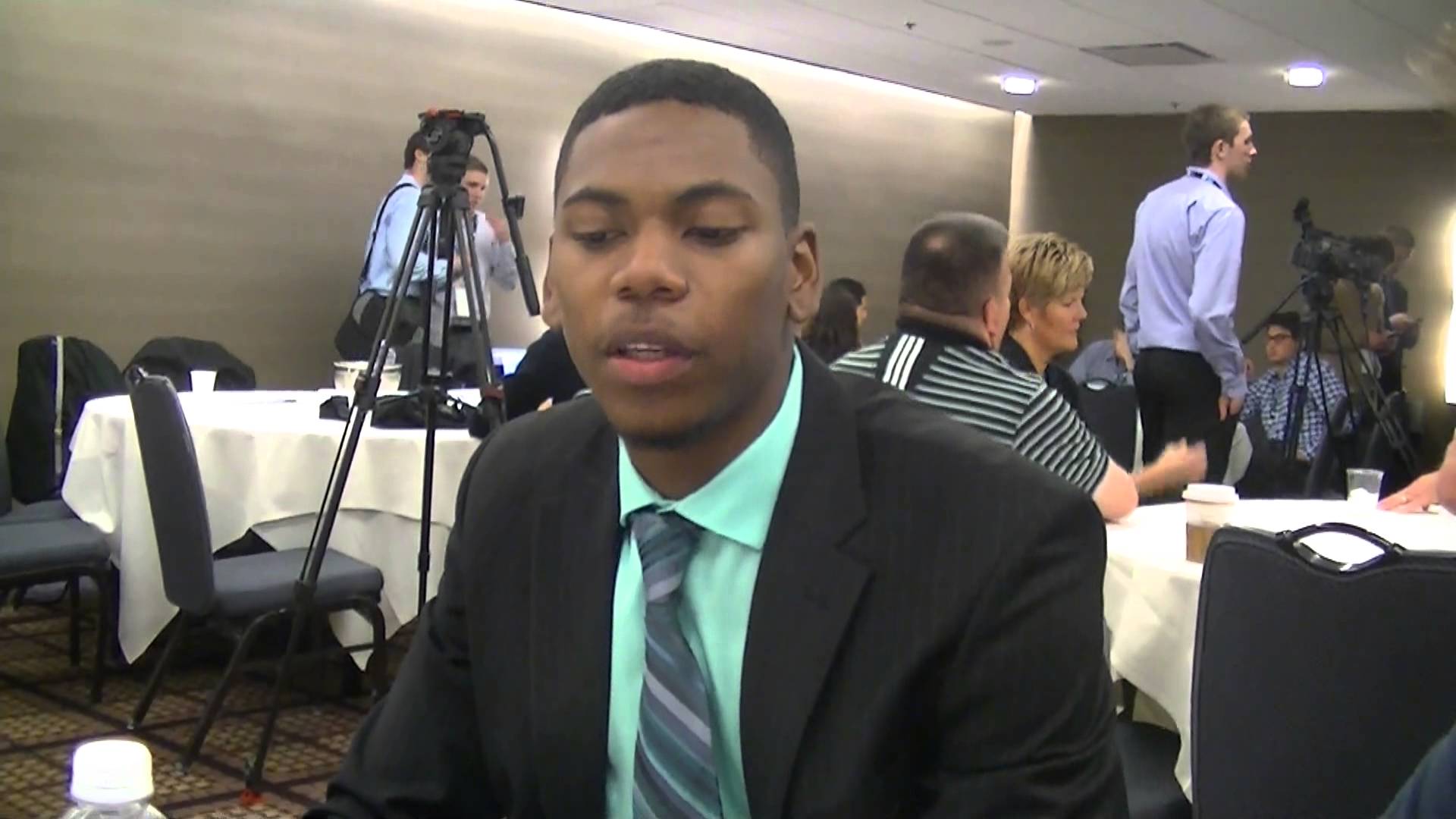 Michigan sophomore Glenn Robinson III sat down with the media outside of Chicago this afternoon to discuss his relationship with Derrick Walton and Mitch McGary and the challenges that lie ahead for the 2013-14 Wolverines. Watch some of what Robinson had to say in the embedded media player below or find quotes after the jump.


On Mitch McGary’s improvement: “Mitch is better, I can already tell. He hasn’t been practicing as much, but I can tell his leadership has stepped up. Him talking on the court to us, off the court, he’s definitely stepped up. Once he’s 100 percent able to start playing again, we’ll see the Mitch that we’ve seen in the tournament.”

On his friendship with McGary: “Being such good friends, I can tell him him things that I can’t necessarily tell everyone. We talk to each other in that manner and we know it’s for the good of each other. Being that close, we understand that we are the leaders on this team. We might have to tell teammates things they don’t want to hear, and we’re doing a better job of that every day and getting more comfortable with it.”

On Michigan’s offense moving away from being point guard-centric: “We have a lot of good players who need to step up and make those shots and help the team out in a lot of ways. So I think that’s something that’s going to come into effect as we move on toward the season. But we have two great point guards who are pass-first and who can get in the lane or make the shot. We have a lot of different options to go to and hopefully we’ll figure that out.”

On the veterans’ confidence in Derrick Walton: “Definitely. I thought I was the only one going into the gym late at night, but I caught Derrick in there a couple times. I was kind of shocked, kind of surprised. Derrick’s a hard worker, I’ll give him that. He has a lot of confidence in his game.”

“I love that. I get just as excited as when I score a basket if one of my teammates scores a basket.”

On the postseason run last year: “It definitely is unbelievable, especially thinking about the Kansas game and some of those games. It makes you think, wow, we really did play great as a team. But also, I haven’t watched the national championship game. I don’t want to. But I still look back at it and think, I want to have another shot at this. That’s something that me and Mitch agreed upon coming back, that’s something we want to do.”

On playing the three or the four: It’s not a lot of difference, especially the way we run offense. The three sees a little more ball screens, but at this point whether I play the three or the four I will see the ball in my hands more. It just matter on defense, guarding the other team’s fours. Most of the time they have a stretch four similar to myself who can step out and make a 3-pointer.

On being number two behind Michigan State in Big Ten preseason rankings: “It’s always going to be intense, but that just amps it up even more. We all want to be there at the end of the day. I’m good friends with a lot of those guys. Seeing them there, a lot of people are like, ‘wow, you guys are talking, you guys are friends.’ We’re cool off the court, but once we step on the court, that competitive mode kicks in and we’re ready to go.”

On the key to guarding Adreian Payne and Gary Harris: “Gary can shoot it, and they both can flat-out play. So we have to just be on our toes defensively at all times and I think we’ll be ready for that moment. I think we’re getting better and better each day. Defense is something we harp on.”