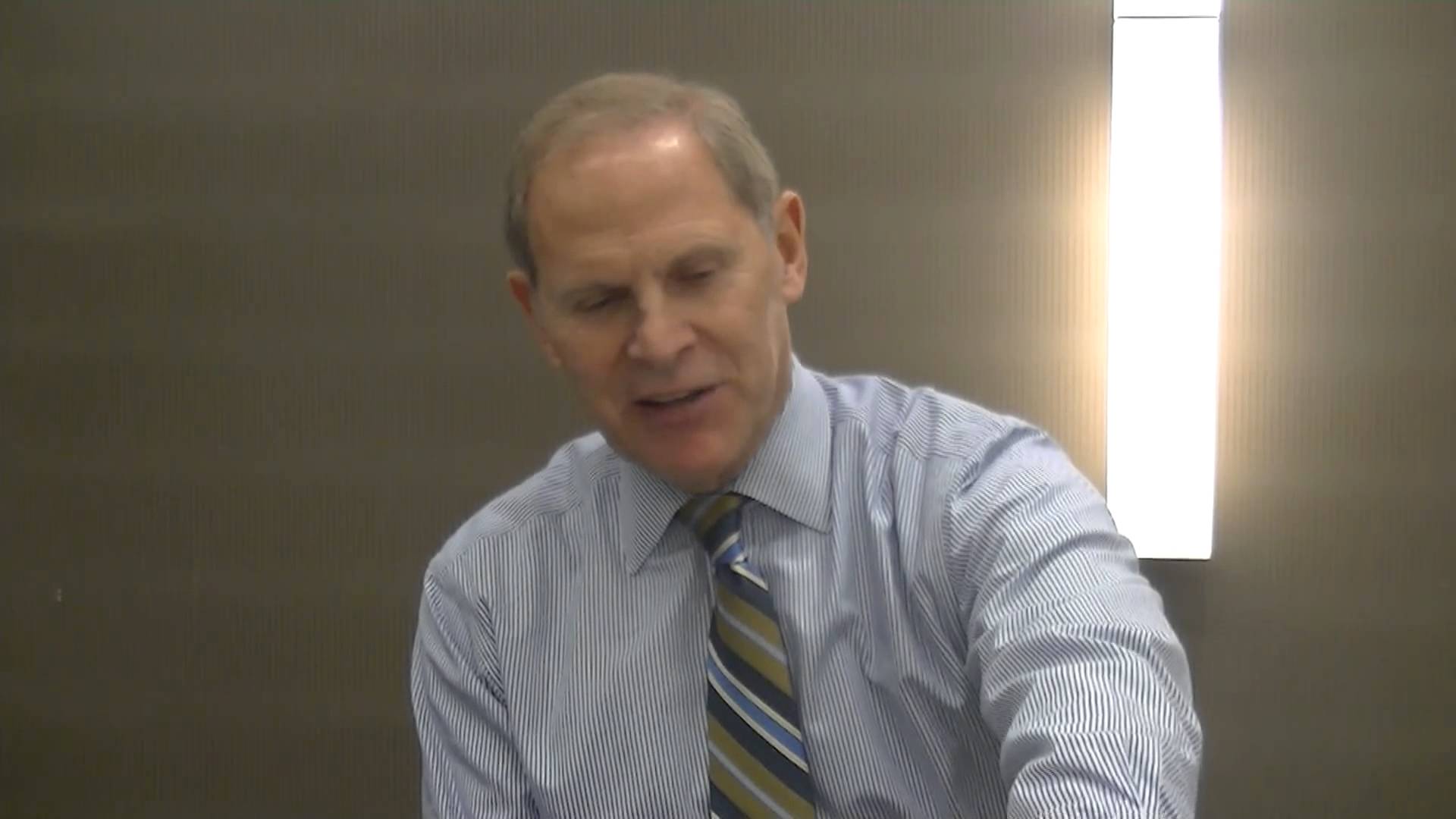 John Beilein met with the media this afternoon in Chicago for Big Ten Media and shared his thoughts on his young team. Watch Beilein’s breakout interview in the embedded media player below or read assorted quotes after the jump.


On Glenn Robinson III being more assertive: There’s different ways people have an effect on games. Last year, the facts say he didn’t get the ball as much, but it didn’t mean he wasn’t affecting games. Guys are like, looking over their shoulder half the time worried about him burning them for a dunk, and it allowed Trey Burke to get right to the basket. He affected games in ways probably only those who coach the game know it. He was a great compliment to what we had. He will obviously have the ball more. There are a lot of shots out there. Now, there’s some great opportunities for people.

On the experience in the frontcourt and what that means for coaching the backcourt: It seems like it has just flipped back and forth. Three years ago we had that veteran team coming back except at point guard where we had Darius Morris. So all of a sudden, there was one guy who people really focused in on. And we won a Big Ten championship, so it was good. Then the following year, all those guys are there but we got the whole frontcourt became almost new with Mitch (McGary), Nik (Stauskas) and Glenn playing at the same time. It goes back to those days when really, we were in the hands of a freshman point guard or a sophomore point guard. Depending on how much we move and the decision we make with Mark Donnal, there are two guys who are really in that mix as opposed to five. I do feel a little bit more veteran than we did last year.

On a balance between coaching the freshmen and letting his veterans teach them: I think what’s really been helpful is being able to coach them in the summer, having that extra week probably in September to coach them. I see them all being very young with what they’re doing. The Caris LeVerts and Spike Albrechts are at just a slightly different level with what they’re doing in practice than what Derrick (Walton) and Zak (Irvin) are doing. There’s not this huge difference between a freshman and a sophomore when it comes to their learning curve. It’s when they’re juniors and seniors that they sort of see it all. Glenn’s one of the ones who, has a sophomore, is really seeing it now. He’s becoming more like Timmy (Hardaway Jr.). Timmy started seeing it all his junior year, and Glenn has shown some of that in his last couple weeks in practice.

On who has impressed him as a teacher: Glenn and Mitch have been really good with the younger guys. And Jordan and Jon, obviously.

On changing systematic strategy according to talent: I don’t think there was ever a drastic change. There was a general migration of subtle changes over time. We’re going to do something 30 percent of the time x years ago, then it was 40 percent and 50 percent of the time. And then last year, we have a player of the year, so we’re going to try to get the ball in his hands as much as possible. I don’t think there’s a drastic change back, as well, but those things could drop 20 to 30 percent in either direction.

On what those changes will be: The biggest question is, what do you do at shot-clock time? Do you have shot-clock plays that could go anywhere? 12 seconds and five different looks? Or trusting one person? I think that will work itself out as the year goes on.

On Caris LeVert: This is the way it’s been going for really all of preseason. What you say the other night is what the preseason’s looked like almost every day. If you look at his numbers — his steals, his rebounds, and everything else — he’s really been playing very well. Just keeping it up and sustaining it will be part of the challenge right now. He’s still skinny. We just love coaching him every day. And he gives us a presence defensively. If we keep doing what he’s doing, we’ve never had that type of stopper or a guy who can steal the ball like that. He’s led the team in steals, by far and away in every practice.

On what was impressive about LeVert during the exhibition: I think watching his jump shot, which was flat and took a little time to get off, he’s added a dimension to it where it’s quicker. Then his ability to get to the rim and make a decision — last year, it might have been just getting to the rim. Now it’s get to the rim, stop, find a sweet spot in the defense and then make a decision instead of having something predetermined. His defense has really always been there, but now he’s stronger and he can sustain it.