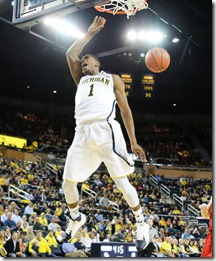 At Big Ten media day in Chicago on Thursday, writers get a chance to talk to players from all over the conference. We took this opportunity to approach players from other Big Ten schools about what sort of problems Michigan presents as a team, and the best way to go about stopping the Wolverines. We had limited time, so unfortunately we just missed Aaron Craft — apologies.

On stopping Mitch McGary: “I think it’s a team effort. Michigan, they run a lot of high ball screens and have him diving to the front of the rim. Obviously he’s a big body, you’ve got to get help side over and wall up against him and try and keep him off the glass. He’s a great player and he’s going to have a great sophomore season.”

On the key to stopping Michigan: “The tempo that they play at, that offense that they run is really spread. They run the high ball screen, they have the corner guy running up through and then they have the big guys diving. So it’s really about staying locked in defensively, getting through that ball screen and coming off the ballhandler so that help can rotate and get there in time. They play with a great tempo. Being with coach Beilein over the summer with the USA team, I know he’s a great offensive mind, and it’s all about staying locked in defensively.”

On Michigan’s offensive attack changing without Trey Burke: “We’re just going to focus on their key guys. Glenn Robinson III, Mitch McGary, those guys. We’re going to focus a little bit more on them because maybe the scoring will be coming from them now that they’re more experienced.”

On the key to stopping Michigan: “Just staying fundamentally sound. If you do something against our rules of defense, it’ll probably bite you. You might get beat back door, or they’ll come off a cut if you’re sleeping. You’ve got to be ready at all times because they’ve got four guys on the perimeter who can shoot and Mitch McGary inside is a presence, obviously. You’ve got to be aware of a little bit of everything and stay on your toes.”

On the biggest challenge Michigan presents: “Last year, Trey Burke (laughs). He was a pretty big challenge. I would say the biggest challenge is being ready for every single player, because I think every player brings something different to that team. They can all score, so you can’t just help off one guy — they can all dribble, pass and shoot. So that makes them hard to guard.”

On the biggest challenge Michigan presents: “They’re athletic, they’re fast and they’re versatile. We know they’re going to be a tough team to guard. We have a long way to go obviously, as a team, but as long as we improve in practice and as long as we keep playing hard and are physical with them — then again, I don’t know how physical you can be with all these rules in place. But I think the big thing about when Michigan and Illinois play is being physical and rebounding and especially defensive rebounding. They’re a great team.”

On defending Mitch McGary: “Don’t let him get the ball (laughs). If he doesn’t get it, he’s not going to do anything with it. But once he gets the ball, just be solid, don’t leave your feet, catch his moves. He’s a great player. He’s going to get some of his baskets. If you’re just solid with him and able to keep him in front of you, then you can force him to take tough jumpers. If he makes a tough two, give it to him — he’s a great player. But don’t give him easy baskets. If you give him those, he’s going to make the hard ones and that just compounds things.”

On the biggest challenge Michigan presents as a team: “The biggest challenge is really their defense. Especially in the post. They double from the low, and they can hurt big men. Playing in the post, you have to be able to make decisions down low, and that’s what they do — they get post players in situations to make turnovers. That’s something I’ve been working on. They always have a great team.”

On the biggest challenge Michigan presents: “They really spread the floor last year, I thought. As far as getting the ball, they can drive the ball but at the same time you have to worry about their shooters, so I think that something they pose for us.”

On the key to stopping Michigan: “Just keeping the ball out of the middle. We have to keep the ball out of their ball-screen action as much as we can, because they got into some ball-screen action last year with Burke, and I felt like he had a lot more options when he got to the middle of the floor because he could go left or right and he could kick out to those shooters.”

On the biggest challenge Michigan presents: “I think right now, in general, they lost some great players to the NBA and I think you have to replace those guys, what they did on offense and on defense. They had those core guys, but now they have Mitch McGary being a solid big man and Glenn Robinson III doing what he does, and they have talented guys coming in. Their coaches have done a phenomenal job of getting those guys prepared to play defense.”

On how the defensive game plan changes with Burke gone: “You just have to study film and see what their go-to’s are. Maybe they’ll be a team that goes to the post more. Last year, they were a predominantly guard team and they had (Nik) Stauskas and Tim Hardaway shooting threes. What is their game plan going to be? There are a lot of new faces, and it will be exciting to see what their identity will be.”