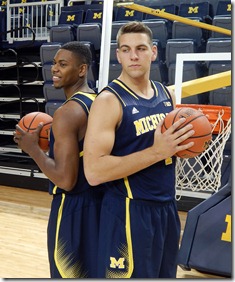 The two have been teammates for years and Robinson was one of the primary reasons why McGary opted to attend Michigan. When the NBA came calling they decided to stay at Michigan, together.

Now they are in the spotlight. Not just expected to be Michigan’s most talented players but to fill a leadership void on a Michigan team with 12 freshmen and sophomores.

There have been times when the responsibility thrust upon Michigan’s two highest-profile second-year players has been frustrating. But according to McGary, you’d never know Robinson was feeling the pressure by looking at him.

“He doesn’t show it. He never shows it. He tries not to show emotion, but I can tell just from being around him for so long,” McGary said. “Whenever he’s down, I always try to say a few words. We lean on each other pretty heavily, and it’s good to have a friend on the team as close as he is to me.”

This is just one of the benefits from being two best friends on one of the best college basketball programs in the country. The pair displayed plenty of on-court chemistry throughout Michigan’s NCAA tournament run, what McGary refers to as their unique “telepathy.”

The bond between the two allows them to lean on each other and vent occasionally when they begin to feel the pressure.

Robinson thinks their relationship has helped them as they move into their new leadership roles.

“Being such good friends, I can tell him things that I can’t necessarily tell everyone. We talk to each other in that manner and we know it’s for the good of each other. Being that close, we understand that we are the leaders on this team,” Robinson said. “We might have to tell teammates things they don’t want to hear, and we’re doing a better job of that every day and getting more comfortable with it.”

The image Glenn Robinson III emanates to the media and to fans is one of a calm, easygoing player with a soft voice and an easy smile. While that is somewhat indicative of Robinson’s personality, Jordan Morgan has news.

“You guys might see Glenn fairly quiet, but Glenn has been very vocal this fall,” Morgan said during Big Ten Media Day. “He’s kind of stepping up and being that guy who’ll say what our team needs.”

This wasn’t always the case, however. According to Morgan, it took some time for the sophomores, particularly Robinson and McGary, to place themselves in that necessary leadership role that was vacated by Tim Hardaway Jr. and Trey Burke leaving for the NBA.

Morgan said it was understandable why the vocal leadership was missing from Michigan’s practices early in the preseason.

“I just think that it was very evident when we started practice that that vocal piece was not there. And if you take a look at our team, it’s pretty easy to understand why. You’ve got our six sophomores including Max who were freshmen last year. They didn’t have to be vocal, they didn’t have to direct guys. They just had to do their job and we were all there — me and Tim and all our seniors were kind of there to guide them,” Morgan said. “But we’ve had a lot of growth recently in guys stepping up and being vocal, guys telling people where to go, talking to each other in practice. There’s been a lot of growth in that area. We were very open. We were like, hey, we need you guys to talk and be vocal and be encouraging, because outside of us two, you guys make up all the experience we have. It’s a new role for them, and I think every day they kind of put it on themselves to get better and talk to their teammates.”

Robinson will always be a player for whom leading by example comes more naturally than leading vocally. In that regard, the sophomore has been a terrific on-court leader during the offseason: by all accounts, he’s improved greatly in all areas and put in the extra time a coach would expect from a star.

McGary has never been short on words or energy but it has been difficult for him to lead by example while sidelined by injury. The Chesterton native said he was determined that his lower back condition not take away from his development as a leader.

“I told him (coach Beilein), being off the court right now, I don’t want this to take time away from the team from a leadership standpoint,” McGary said. “I want to be 100 percent engaged in the team even if I’m not on the court. I’ve been more vocal in practice. And [Tuesday night] at the game, trying to help the guys out any way I can, whether it’s encouraging them and keeping their spirits up or telling them where they need to be in plays. I’m kind of a veteran now even though I’m a sophomore.”

Regardless of position, Robinson will see more shots

One of the major debates throughout the offseason has been where Glenn Robinson III will play: the three or the four?

The only problem with this debate is that there is little salient difference between the two positions. John Beilein has even been known to refer to the four as “the other three.”

“It’s not a lot of difference, especially the way we run offense,” Robinson said. “The three sees a little more ball screens, but at this point whether I play the three or the four I will see the ball in my hands more.”

Robinson said the difference in the positions really only matters on the defensive side of the ball.

“It just matter on defense, guarding the other team’s fours,” Robinson said. “Most of the time they have a stretch four similar to myself who can step out and make a 3-pointer.”

No matter what position Robinson plays, he expects to see the ball in his hands more. The sophomore said he’s been working hard on his passing to prepare for this new role — and early reports out of practice have indicated his assist numbers are way up.

“My passing ability is something I’ve worked on with my assists, that’s something I continue to work on. So hopefully that’s something we’ll do,” Robinson said. “I love (passing). I get just as excited as when I score a basket if one of my teammates scores a basket.”

For his part, Beilein hopes for a more aggressive Robinson this season.

“There’s 80 more minutes and there’s a good 20 to 30 shots, scoring opportunities that Trey and Tim rightfully took upon themselves last year that are wide open,” Beilein said. “We want him to fill a lot of those opportunities, attacking from all different sides.”