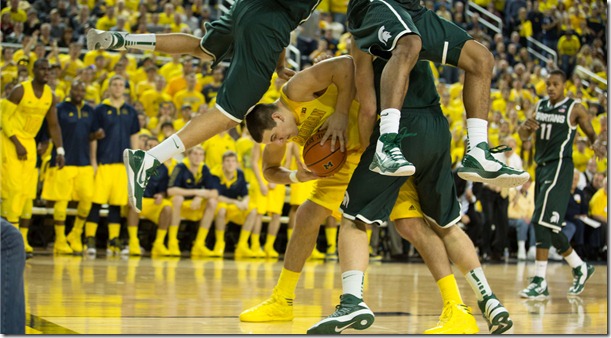 For a long time, the “rivalry” between the Michigan and Michigan State basketball teams was so lopsided the label hardly applied. But with the re-emergence of Michigan basketball to the national spotlight, it’s safe to say the edge has returned to the intra-state matchup. The Big Ten confirmed as much at its media day in Chicago when it was revealed Michigan State and Michigan were ranked number one and number two, respectively, in the Big Ten preseason rankings.

It’s not just about state bragging rights anymore — being two of the best teams in one of the nation’s best conference means the rivalry has national implications.

Michigan State coach Tom Izzo spoke on the rivalry between the two schools during media day on Thursday.

“I think a rivalry isn’t a rivalry unless you have two good teams. Duke and Carolina wouldn’t be Duke and Carolina, Ohio State and Michigan wouldn’t be Ohio State and Michigan, Texas and Oklahoma in football, you know what I mean,” Izzo said. “So that always is going to add to it, but you don’t need a lot to be added to Michigan-Michigan State. It doesn’t matter. It’s always a rivalry. I think the difference is, it’s always a state rivalry, it’s always a Big Ten rivalry, when you have two good teams, it takes on a national rivalry. That’s what I think everybody wants to see. It’s good for us, good for them, good for everyone.”

But the rivalry isn’t only enhanced by the preseason rankings — the two teams are intertwined through a myriad of personal relationships between players who either grew up in the same area or played prep basketball together.

This leads to off-court fraternizing that may make fans uneasy, but is simply an indication that both schools pull talent from similar regions and look for similar attributes in their players.

“I’m good friends with a lot of those guys,” Glenn Robinson III said of the Spartans. “Seeing them there, a lot of people are like, ‘wow, you guys are talking, you guys are friends.’ We’re cool off the court, but once we step on the court, that competitive mode kicks in and we’re ready to go.”

For starters, Robinson and Mitch McGary both played in the same SYF Players AAU program as Michigan State’s Branden Dawson. Dawson is from Gary, Indiana, which is a stone’s throw from both Chesterton, where McGary is from, and St. John, where Robinson grew up.

McGary said that the night before Big Ten media day, the three schools that form some of the conference’s most contentious rivalries — Michigan, Michigan State and Ohio State — all went out to dinner together at a steakhouse in Chicago. While the thought of Buckeyes, Wolverines and Spartans breaking bread may repulse some fans, the programs have a high comfort level with each other because of the relationships between players.

Michigan’s star big man said his relationship with Dawson is still strong and that their friendship from their AAU days runs deep.

With the arrival of Zak Irvin, another close friendship between Michigan and Michigan State is established — Irvin and Michigan State’s star sophomore (and the Big Ten’s preseason Player of the Year) Gary Harris played one year apart on Hamilton Southeastern in Fishers, IN and are widely known to be thick as thieves.

John Beilein acknowledged their relationship but said the players can’t let their friendships get in the way of their goal when they hit the court.

“They’re really close friends. I think that will be interesting. There are all kinds of storylines in that,” Beilein said. “So many former teammates and so many AAU relationships as well between all those guys. We cannot let those emotions get in the way of the real task, trying to get a Big Ten win against a terrific team.”

The players echoed that sentiment, saying that while the relationships they have with each other are important, they take a back seat to getting wins. And with such high expectations for both teams, both games between the Spartans and Wolverines this season will be all-out dogfights.

Michigan State’s Adreian Payne said the elevated profile of both teams will only add to the rivalry.

“It’s always going to be big,” Payne said. “But for the rivalry, it makes it even better. It makes for better competition and make the game even more important and it brings a lot to (the state of) Michigan, especially to the fans.”

Yes, the players on both sides of this heated rivalry are very familiar with each other. And that’s part of what makes the matchup so enticing. Playing together since their early teens, McGary, Robinson and Dawson know each other’s games inside and out; if Irvin and Harris are ever matched up with each other — a plausible scenario — watching the sparks fly between two players who fought for playing time throughout high school will be fun for basketball fans on either side of the Spartan-Wolverine divide. The fact that the stakes are so high this season only add to that.

Jordan Morgan was on Michigan teams that lost three straight to Michigan State his first two seasons, then was an integral piece of the 2011 team who bested Michigan State in East Lansing in a game that has gone down in Michigan lore as the moment the matchup between the two schools turned back into a rivalry.

The redshirt senior summed up the heart of the rivalry nicely on Thursday.

“I don’t really think we need anything to make it more competitive. I think we both know where we’re at as programs. It’s a battle every time,” Morgan said. “We want those bragging rights. We want that win. We’re cordial off the court, but I think on the court, it’s all fight. I don’t think those rankings will really have anything to do with that — I think that’s more for the fans. It’s already kind of known.

“We don’t want to lose that game.”