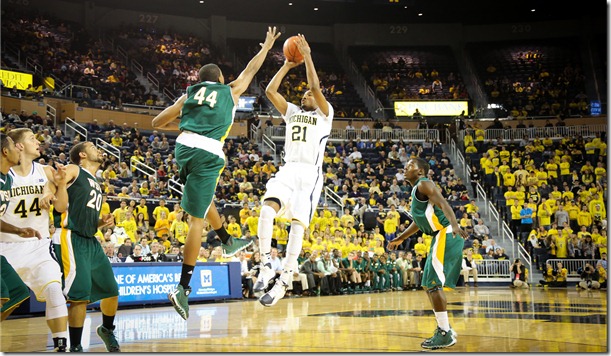 Michigan wasn’t crisp but handled Wayne State comfortably, 79-60, in its final preseason exhibition tune-up. The Wolverines faced a somewhat tougher opponent, although the Warriors were missing three players, but failed to live up to the extraordinarily high standards they set in their 117-point exhibition opening performance.

Individually there were plenty of positives to draw from the routine win. Freshman point guard Derrick Walton earned his first start and played well while Zak Irvin had a breakout game, knocking down three straight triples en route to 13 points. Caris LeVert and Nik Stauskas both picked up where they left off against Concordia and continued to showcase their offseason improvements.

But as a unit, it was obvious that the Wolverines haven’t figured everything out just yet. John Beilein is still tinkering with his lineups and experimenting with players in new roles and then there’s Mitch McGary. It’s nearly impossible to judge the 2013-14  Wolverines until their preseason All-American returns from his back injury.

Michigan scored 1.24 points per possession on the game, a solid total but unspectacular against an admittedly well organized Division II opponent. Wayne State did a great job of slowing Michigan’s transition game which took some of the punch away from the Wolverine offense. In the first half, that was no concern as Michigan’s shooters were in a groove. The Wolverines made 7-of-11 first half threes and scored an impressive 46 points on 31 possessions (1.48 PPP). In the second half, things were dicey. Michigan’s shooters went cold (2-of-9 from three point range) and the bulk of the scoring came from the free throw line. The Wolverines failed to make any impact on the offensive glass throughout, rebounding just 22% of their misses and scoring just one second chance bucket.

Defensively, Michigan’s performance left a bit to be desired. Wayne State’s Bryan Coleman went on a scoring outburst in the first half, tallying 17 points on 13 shots. Some were well guarded, others were wide open but eventually the Wolverines were able to slow Coleman in the second half (8 points on 11 shots). That was encouraging but the defensive rebounding wasn’t. Wayne State rebounded 44% of its misses for 9 second chance points in the second half alone.

The new NCAA-mandated emphasis on fouling was clearly in effect (having Ed Hightower officiate an exhibition game gives a superb preview of whats to come) and the results clearly benefited the Wolverines. Michigan attempted 28 free throws to just 46 field goal attempts (61% FT Rate). Wayne State attempted just 10 free throws to 63 field goal attempts and was outscored 22-7 at the stripe.  John Beilein’s teams have always done a great job of avoiding fouls but have struggled to rack up free throw attempts. Tighter officiating would seem to help Michgian as much as anyone and that will be a stat to watch in early season play – and then again once Big Ten play begins.