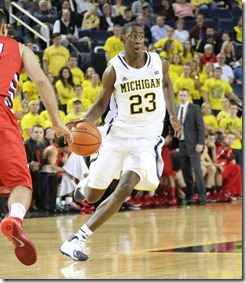 Michigan hosts Wayne State in its final preseason exhibition at the Crisler Center tonight (7:00 p.m.). The contest will be the first chance to see the 2013-14 Wolverines live on television as the game was bumped from BTN’s digital offering up to the Big Ten Network – tickets are also available starting at $5.

Wayne State gave Michigan a decent exhibition game two years ago as the Wolverines escaped with a 47-39 victory. Michigan has a bit more firepower in its arsenal these days and game that close would be a surprise but the Warriors should provide a tougher challenge than Concordia last week.

Wayne State has experience and ability, primarily in the backcourt. The Warriors return three starters and 10 players from last year’s team which shared the GLIAC regular season title and earned a bid to the Division II NCAA tournament. That group includes five of the top seven scorers from a season ago, including leading scorer Mike Hollingsworth, a 6-foot-2 shooting guard. Senior guard Chene Phillips was an GLIAC All-Defensive team selection last year and originally played Division I basketball at Liberty.

The Warriors backcourt and wing options should provide a much more stringent test for Michigan’s perimeter players who were able to simply overwhelm Concordia. There will still be a large talent gap but the increase in competition should tell us a bit more about this year’s team.

Michigan hit on all cylinders against Concordia. Six Wolverines reached double figures en route to a 117 point scoring outburst. Zak Irvin was among those that hit double figures, 10 points on 4-of-7 shooting in 19 minutes, but the talented freshman never quite found a groove. He looked a bit tentative throughout his first game and John Beilein admitted that Irvin’s “head was spinning” while he was on the floor.

Irvin played a solid chunk of minutes at the four position on offense against Concordia and that might be how the Wolverines have to get him on the floor. Trying to find wing guard minutes for Stauskas, Robinson, LeVert and Irvin becomes a difficult proposition without a bit of creativity. Watch for Irvin to find more spots to get involved in the offense the second time on the floor.

In his first game, Irvin mostly settled for jumpshots off the catch, transition opportunities and a second chance layup. He’s capable of being a more aggressive scorer in the mid-range game, looking for his shot off the bounce and attacking the basket. As his comfort level in the offense progresses, those are the sort of things to watch for from Michigan’s 6-foot-6 freshman.

Mitch McGary is still out and Michigan’s big men need to seize the opportunity in front of them. Jordan Morgan and Jon Horford were a steady rebounding presence – combining for 13 defensive and six offensive rebounds – but were quiet overall.

Wayne State has just two players over 6-foot-6, Michael Martin and Joel Ndondo. Ndondo is a 6-foot-8 redshirt freshman while Martin, 6-foot-8 and 210 pounds, played just seven minutes per game last year. Michigan has size and experience advantage in the frontcourt and needs Horford, Morgan and Bielfeldt to take advantage.

Because of Wayne State’s smaller perimeter oriented lineup, this will also be a good test of Jordan Morgan at the four position. Against Concordia he looked plenty comfortable defending on the perimeter. Offensively he was able to get into a few good spots but showed some hesitation to pull the trigger. The Morgan at the four experiment has never fully materialized earlier in his career and this is his best chance to take advantage.

LeVert is the X-factor

Caris LeVert’s double-double with 10 assists in Michigan’s first exhibition game was one of the most encouraging developments. LeVert looked like a changed player. He played multiple positions, defended, passed the ball extremely well and got to the rim with ease. There was talk throughout the offseason that LeVert could emerge as the X-factor for the Wolverines on both ends of the floor and he looked the part.

It will be interesting to see how his role develops moving into the season. His versatility is great off the bench but against Concordia he looked like one of Michigan’s best five players. Does LeVert eventually push for a starting role or is he better served to be Michigan’s sixth man.

Derrick Walton showed flashes of brilliance in Michigan’s exhibition opener while Spike Albrecht proved reliable. John Beilein left Walton in the game until the closing moments because he realizes there’s only so much time available to prepare the Wolverine point guards for the more stringent early season tests that lie ahead. Albrecht might still be the starter but Walton’s development is as important to Michigan’s growth as anything other than Mitch McGary’s health.

There are 120 point guard minutes to be played before Michigan embarks on a six game stretch that includes trips to Iowa State, Puerto Rico and Cameron Indoor. Walton’s every move is going to be a teaching moment and it’s time to start watching for progress. His to-do list from game one likely focuses on handling the ball against the full court press and not settling for jumpers off the dribble.