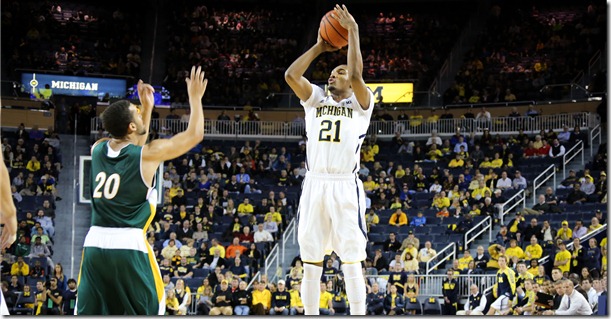 Instead of our regular-season staple, Five Key Plays, we will continue analyzing the exhibition season by examining four salient points we learned from game action. Here are the highlights from Michigan’s 79-60 exhibition victory over Wayne State on Monday evening.

This team can shoot

Michigan had six different players hit 3-pointers on Monday night and at one point, the Wolverines had gone 8-of-12 from long range. Resident sharpshooter Nik Stauskas hit two of his four shots from deep and freshman Zak Irvin got it going as well, nailing three of five.

But it was all the shooting contributors — Spike Albrecht, Derrick Walton, Caris LeVert and Glenn Robinson III all had one three apiece — that makes Michigan’s offense so dangerous.

While it isn’t surprising given John Beilein’s penchant for not only recruiting good shooters but developing them, what’s staggering about this team is its shooting depth. LeVert and Albrecht were both backups last night, and they are two of the better shooters on the team.

Beilein said the amount of shooters Michigan had on the court on Monday was due to the way Wayne State was defending them.

“They were so small that the only way we could play anyhow was to go out and play with only one big in there,” Beilein said. “And we’re going to have four shooters out there. So that was good just to be able to spread the court.

“Anybody can go out and shoot. Where are their shots coming from? What tactics are we using to get them open? Are they run-out shooters, do they shoot off the dribble, are they spot-up shooters? We try to figure it out and then put them in those formations.”

If last week’s exhibition game against Concordia was Derrick Walton’s coming-out party, Monday night it was Zak Irvin’s time to shine. Irvin didn’t do much in Michigan’s first exhibition game, never quite finding an offensive groove. And while he’s still feeling it out, he looked much more comfortable on the court against Wayne State.

Beilein clearly sees Irvin as an asset on the court in a few different ways.

“To see Zak come off and do that is really good for us, I think, and good for him as well,” Beilein said. “Zak, whether he’s spotting up in the corner or whether he’s on the wing or out front, if he stands there people will find him. Just having that one extra shooter — a little bit like when we would play small and have (Zack) Novak out there, it’s that one extra shooter out there who can really impact an offense and get to the rim better.”

Irvin scored 13 points on the night and shot over 50 percent from long range, hitting three triples in the first half. Irvin also showcased one of his signature moves from his prep days with a free-throw line jump stop and elevating for a smooth mid-range jumper.

Overall, Irvin showed a glimpse of the player Michigan fans expected to see this season.

“It’s always nice to see the first one go in,” Irvin said of his shooting on Monday. “And then with the other two going in, I just felt really good about it.”

The offense will look different this season

Last year, Michigan’s bread and butter was the pick-and-roll at the top of the key, with Trey Burke dominating the ball and almost every other player’s scoring opportunities coming off of what John Beilein called “residual action” from that initial set.

This year, it seems as though Michigan is heading in a slightly different direction. While the pick-and-roll will still be a big part of the Wolverines’ offense, it will not be as prevalent as it was last year.

It makes sense for a couple of reasons. Michigan no longer has a dominant point guard, for one thing. What the Wolverines do have is a bevy of talented, long wing scorers who are extremely tough to handle one-on-one because of their shooting ability — Nik Stauskas, Caris LeVert, Zak Irvin and Glenn Robinson III are matchup problems for smaller guards as well as bigger, slower bodies.

On Monday, Michigan saw more production coming from spreading the floor and drive-and-kicks. This led to plenty of assists (16) as well as more foul shots than usual, something Beilein liked to see.

“We want to get to the foul line like we did today,” Beilein said. “When you get to the rim, there are a couple ways we can score, especially with the new emphasis. I’m pleased with that. We’re not putting people at the foul line, and we’re getting there more than we have in the past, driving under control.”

That being said, it remains to be seen how the offense will continue to develop once Mitch McGary gets back in the lineup. Given how effective he was in the pick-and-roll last season, it’s safe to say McGary will see plenty of that sort of action.

One of the more pleasant revelations over the course of Michigan’s first two exhibition games is the consistency of Derrick Walton’s defense. The freshman point guard is extremely quick and his hands were active all game.

Walton even performed an imitation of his predecessor, Trey Burke, in both exhibition games; the Chandler Park native anticipated a slow spin move from his man and picked his pocket on the back side, coasting for a lay-in a la Burke against Michigan State last season.

“He used the same little catch-from-behind there, and he did it in the last game as well,” Beilein said with a smile. “I really like his potential to play really good on-ball defense. They were running some action today where you really have to think about it a little bit, and he spotted it right away and called it out. That’s really rare for a freshman point guard. I think we really got a high-IQ player there. He’ll just keep learning. He’s still probably upset about his turnover over the top when he had an assist ready for Glenn, but he’ll learn.”