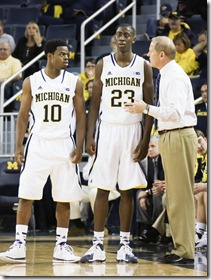 Michigan’s exhibition season is over and the real season tips off on Friday so we’re taking a look back at what questions were answered in preseason play and what questions remain. One major question is Mitch McGary’s health, the 6-foot-10 sophomore won’t play on Friday but continues to progress, according to Michigan head coach John Beilein this morning on WTKA. Here are some other questions and answers from preseason play. (Photo: Dustin Johnston)

Derrick Walton will likely be the starting point guard

I don’t think conclusions should be drawn by John Beilein’s decision to start Walton against Wayne State — he mentioned after the game that he was intentionally starting both point guards during the two exhibition games. So it’s likely that start was pre-determined. However, it seems clear that the freshman is simply too enticing a talent to let him sit on the bench. Walton played 25.5 minutes per game in preseason play compared to Albrecht, who averaged just 17 per game. He will handle the majority of ballhandling duties, but it’s important to note that the point guard role will not be nearly as clearly defined as when Michigan happened to have the Player of the Year at the position last season. A slew of different guards will bring the ball up the court — mainly Nik Stauskas, Albrecht, Caris LeVert, Walton and maybe even Zak Irvin later in the year — and the one and two positions will share similar play-making duties in the half court.

LeVert’s play has been a revelation so far this preseason — the wing has improved vastly from last year and appears confident and in control. LeVert’s shooting stroke has been much improved, but it’s his ability to get to the rim that has been the most surprising development in his game. Through a summer in Ann Arbor and working on his body, it appears LeVert has turned what was once a weakness into a strength. He has scored 16 points in each of Michigan’s two exhibition games, and against Concordia he was also a distributor, with 10 assists. Michigan’s coaching staff is desperate to play him; the money quote from John Beilein after Wayne State? “We just need to get him more and more reps.” Whether he’s a starter or the first man off the bench remains to be seen, but one thing is for sure: he’ll see the court plenty and his versatility makes him extremely valuable.

Michigan will make a lot of threes

It’s tough to judge anything by the numbers at this point because the sample size is so small and the competition is so poor. There isn’t really an appreciable difference between last year’s 3PA/FGA number (34.2) and this year’s (39.4), and it’s easy to see this team shooting around the same amount of threes. But what’s undeniable from watching Michigan is far is the sheer amount of talented long-range shooters it will be trotting out this season. Essentially, Mitch McGary, Jordan Morgan and Jon Horford are the only consistent PT-getters who aren’t known to consistently knock down 3-pointers. When Glenn Robinson III plays the four, the Wolverines can space the floor with four different players who are threats from deep. Adding Walton and Irvin to the mix only makes them more dangerous, as evidenced by their combined 50 percent success rate in two games thus far.

This is arguably the biggest question entering the season. How will McGary affect this team? The first place to look is what his presence does for the lineups we’ve seen in the preseason thus far. In both preseason games, Michigan has gone big with its starting lineup with Jordan Morgan at the four and Jon Horford at the five. This lineup, while offering some positives, has been less than effective. Horford’s rebounding has been good — 12 rebounds and nine rebounds, respectively, against Concordia and Wayne State — but it’s clear Morgan isn’t yet comfortable at the four position offensively. McGary has expressed a desire to play four, but he’ll be at both the four and the five positions consistently. This leads to the crowded frontcourt prophesied before the season began. It remains to be seen how extensive McGary’s back injury is, but barring a setback it’s likely fans will see him on the court playing extensive minutes soon and Morgan and Horford will be splitting minutes in the post. Once McGary gets in the game, it will be very interesting to see how he’s used. There’s no doubt coaches are chomping at the bit to see a McGary – Robinson/Stauskas/LeVert/Walton pick-and-roll combo, but also look to see the talented sophomore big in the high post as a distributor. Isolation plays on the block are a rarity in Beilein’s offense not seen since the days of DeShawn Sims, but some face-up opportunities in the near post seem like a great way to utilize McGary’s skill.

Has Glenn Robinson III developed into a playmaker who can create his own shot?

It’s safe to say this question hasn’t yet been answered through two games. Against Concordia, Robinson scored 33 points, and we got to see Robinson be his usual, shockingly efficient self. But we still haven’t seen Robinson in much ball-screen action, and we haven’t yet seen him have a lot of success taking defenders off the dribble in half-court sets. We have seen flashes of Robinson creating his own offense with some impressive midrange pull-up jumpers, but against Wayne State he struggled a bit getting to the rim off the dribble. I think, as the season goes on, the answer to this question will be “yes.” But at this (extremely) early moment, we haven’t seen proof of it yet. As far as end-of-clock situations go, it’s a toss-up between Stauskas, LeVert and Robinson. Robinson is the lottery pick, and thus the expectation falls on him to take over that role but Stauskas and LeVert both looked more comfortable putting the ball on the deck and making something happen.

How will the wing rotation shake out and where will Zak Irvin play?

In both preseason games, Michigan started with a “big” lineup: Walton/Albrecht, Stauskas, Robinson, Morgan and Horford. With two bigs, this left players like Irvin and LeVert — really, really good players, I might add — out in the cold. I thought Robinson would play more at the three than the four this season before preseason play began, but given Beilein’s rightful preference of playing his best five players and the lack of differentiation between the three and the four in his offense, not to mention the bevy of stretch fours Michigan will be facing this season. I can see a lineup that features a point guard, either Stauskas or Irvin at shooting guard, either Irvin or LeVert at the three, Robinson at the four and McGary at the five. However, it feels as though lineups will be determined largely by matchups on a game-by-game basis.

So, given the assumption that the coaches want to play Irvin, where will the talented freshman see the court? Irvin has been able to play some four in exhibition play against smaller teams. Offensively that role is nearly identical to the three, but it will be interesting to see who guards opposing combo forwards in more difficult games. If McGary plays the four and Robinson plays the three consistently, it’s tough to see where he fits in given that he, LeVert and Stauskas all play essentially the same position. Having too many talented players is a nice problem to have, but it does raise the question of where they’ll all find playing time.