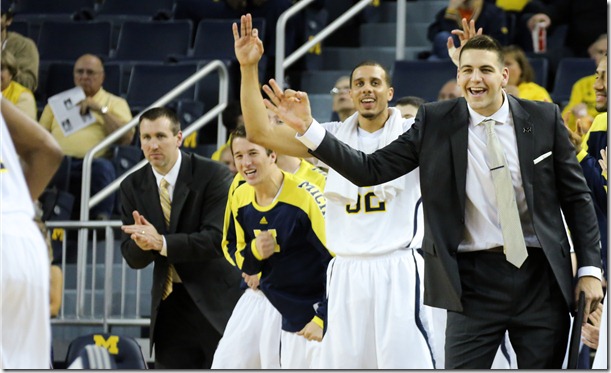 Mitch McGary hasn’t touched the floor since practice began this fall but was named to the Associated Press Preseason All-American team along with Marcus Smart, Doug McDermott, Russ Smith and Andrew Wiggins. The decision has been questioned by some so we took sides. Joe Stapleton argues that McGary is overrated while I argue his case for making the team.

I caught some flak on Twitter Monday night for calling the AP’s selection of Mitch McGary as a preseason first-team All-American “bizarre.” While “bizarre” may have been a bit too strong a word, I stand by my perplexity at the choice. I’m not saying it was necessarily the wrong decision, just that it seemed arbitrary to me.

The award is obviously based on potential, but it’s not just that — a player’s body of work matters. Feel free to point to the selection of Andrew Wiggins on this year’s team, but remember that he is only the second freshman since the AP started picking the team in 1986 to be given a spot on the first team (the other was Harrison Barnes prior to the 2010-2011 season). The pick is based on what the writers see as the player’s potential accomplishments for the coming season, but body of work plays a big role in deciding what that potential is. And McGary’s body of work simply isn’t overwhelming.

Before the NCAA tournament last season, McGary broke double digits in scoring seven times, and two of those were against Eastern Michigan and Western Michigan. I can only imagine the reaction that I’m going to get for saying this, but let’s take a deeper look at his NCAA tournament performance. His two dominant games were against VCU and Kansas. The Kansas game was a beautiful, amazing display of talent and skill by a player coming into his own. I take nothing away from that performance. VCU, on the other hand, had no big man to speak of and this allowed McGary to clean up on the offensive glass and finish off pick-and roll action. Check Five Key Plays if you don’t believe me. Going up against Adreian Payne, Adam Woodbury, AJ Hammons, Nnanna Egwu and company on a night-in, night-out basis will be a much different experience.

Obviously the writers saw a certain version of McGary’s freshman year. They saw a freshman who came in out of shape and overwhelmed, gradually improved as the season went on, and finally showed what he could do in the NCAA tournament with a run of very good play. There’s nothing wrong with this vision of his freshman year. I think it’s highly possible McGary could play like an All-American this season, and I hope he does. But there are reasons for skepticism.

I’m skeptical about the assumption that McGary will play at the level he displayed for six games in the tournament for a whole season without an All-American point guard. As much as Michigan fans didn’t like hearing it from opposing big men throughout the tournament, a big part of what made McGary so good was his ability to finish plays Trey Burke created. Michigan has other playmakers this season, but none will be as potent, or as masterful in the pick-and-roll, as Burke.

I’m also skeptical of McGary’s ability to stay on the court. Last season, McGary registered over two fouls in 17 games and was whistled for 4.8 fouls per 40 minutes. Even in the NCAA tournament, he had four fouls against Florida, Syracuse and Louisville. The NCAA-imposed rule changes on defense make it harder to take a charge, not easier. To me, it’s a legitimate concern.

McGary’s ability to create apart from Burke remains a legitimate question about his game. Last year, we saw brief flashes of passing ability, particularly against Syracuse; we saw a midrange jumpshot late in the season; we saw the very occasional baby hook. As far as skills apart from finishing at the rim, his greatest was his offensive rebounding, which is admittedly savant-like.

The argument I got on twitter in favor of McGary’s selection is the supposed dearth of qualified big men this season. Other media outlets have selected Kentucky’s Julius Randle over McGary, which I find much more perplexing; two freshmen on the first team is unheard of. But consider Isaiah Austin, Baylor’s 7-foot-1 sophomore who would have gone in the first round if not for a shoulder injury last season. He had better raw numbers than McGary (13 points and eight rebounds for Austin, seven and six for McGary) even though he was less efficient. I think the more obvious alternative would be Adreian Payne. Before the torches and pitchforks come out, Payne had a more successful statistical year than McGary last year and severely outplayed him in both head-to-head matchups between Michigan and Michigan State. Has McGary closed the gap that was evident in early March? Maybe, but I doubt it.

I’m not saying McGary’s going to suck this year. I like his game a lot. I don’t think selecting him to the first team was necessarily the wrong move, it just struck me how arbitrary it seemed. Given the question marks still surrounding his development and the fact that there are good arguments for other bigs who had better seasons statistically and have equally high ceilings, I thought the AP would go with someone else. Here’s hoping he outplays everyone, proves me foolish and proves himself worthy of first-team status from the moment he steps on the court this season.

Let’s start with what Mitch McGary has accomplished. He dominated for six games on the game’s biggest stage and was selected to the All-NCAA Tournament team – for good reason. McGary – not Trey Burke, Tim Hardaway Jr. or anyone else – was the reason that Michigan made it to the National Championship game. His NCAA tournament wasn’t just two games – he dominated up until the Championship.

His best performances were against Kansas and VCU (where he was absolutely dominant) but he still handed out six assists against Syracuse, and was a rebound short of double-doubles against South Dakota State and Florida. He also grabbed 11 steals and blocked seven shots in tournament games for good measure. He didn’t just play well, he changed the entire dynamic of Michigan’s team.

Yes it was almost out of nowhere and I’ll admit that NCAA tournament success doesn’t always translate to success in the next season (just ask Durrell Summers). But McGary’s situation is a bit different because Michigan is serious about getting him involved in this offense in ways that rarely happened last year. McGary will have the opportunity to thrive because for Michigan to be a great team, he needs to.

His scoring totals weren’t gaudy but he was far from inefficient. His freshman year offensive rating of 113 wasn’t half bad and he shot just shy of 60% inside the arc. He was a touch less efficient than Adreian Payne but he blows someone like Isaiah Austin, who shot 50% inside the arc, out of the water offensively.

John Beilein brought McGary along slowly in his first season. Whether that was accidental genius or a well orchestrated plan, it worked nearly perfectly. Beilein broke McGary down, brought him along slowly, and let him loose in March. The 6-foot-10 sophomore has been resting a back injury on the sidelines this fall and you can be sure that Beilein will be cautious with his prized possession early on this season.

McGary has always been a special talent more than capable of dominating when he’s at the top of his game. Michigan will need him more in January and February than it does in November and Beilein certainly hopes that McGary can carry the Wolverines in March and April once again. This is the same kid that showed out at nearly every major AAU tournament a shoe company event in summer of 2011. He’s always had the ability to dominate when he puts it all together.

McGary’s older than your average sophomore and he might foul a bit more often than you’d like but he plays the game with more energy than just about any big in the country. He runs the floor hard and is capable of throwing pinpoint passes like a guard. He dominates the glass on both ends of the floor – turning a routinely weak rebounding Wolverine team into a competent one – but can also jump passing lanes like a wing defensively.

Some of the best players in college basketball this season will undoubtedly be freshmen. Not just Wiggins but Julius Randle, Aaron Gordon and Jabari Parker are all capable of making a run at All-American teams by the season’s end. But if the AP Preseason All-American team is only for freshmen with enough hype to be on the cover of Sports Illustrated, then filling out ballots is going to be difficult in an era where postseason All-Americans are in the NBA draft come June. (Not everyone is scared to put freshmen on their All-American teams, USA Today’s team features Parker, Wiggins and Randle)

There just aren’t tons of highly touted players returning to college basketball this season. Gary Harris and Adreian Payne could probably make a strong case as leaders of the Preseason No. 2 team but Aaron Craft, who averaged 10 points and five assists per game last season, garnered the sixth most votes. No one else on the ‘also received votes’ list jumps off the page as a notable miss.

McGary’s resume isn’t perfect, but discrediting him because of his slow freshman year development isn’t fair. If healthy, McGary has the ability to put up a double-double almost every night and carry Michigan deep into the NCAA tournament once again.