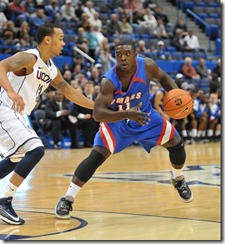 Michigan will celebrate last season, raising a Final Four banner into the rafters, before beginning a new one this evening at the Crisler Center. The Wolverines open the year with a prototypical guarantee game, hosting a small school that pays the bills by traveling across the country throughout November and December to collect paychecks. The result is nearly predetermined and, assuming things go according to plan, should serve as a continuation of the evening’s celebration. (Michigan’s schedule is a mix of very difficult games sandwiched between guarantee games like this one.)

The River Hawks will be playing their first Division I game ever with a first-year head coach, Pat Duquette, leading the way. The first season under any new head coach is rocky but the transition to Division I is even more difficult, especially when your first game is against a talent-laden team fresh off of a trip to the Final Four.

Duquette has a fairly impressive resume as an assistant coach, serving under Bill Coen at Northeastern for the past three seasons and under Boston College’s Al Skinner for the 13 years before that, but he’s never been a head coach. UMass Lowell, picked to finish ninth among nine teams in the America East, wasn’t great last year even at the Division II level (the River Hawks finished 15-13) and will have its work cut out this season with only three non-conference home games.

Duquette is keeping expectations reasonable, according to this quote in the Lowell Sun:

“Let’s be honest, the expectation is that it’s not going to be a very competitive game,” said first-year UML head coach Pat Duquette. “My goal is to get our players to play hard and comfortably the best I can. And then we’ll be fine.”

Writing a preview about any team before the first game of the season feels trivial at times, especially a team that’s in such a state of change. UMass Lowell hasn’t even played an exhibition game, although they did have secret scrimmages against Sacred Heart and Holy Cross. We don’t know much about the River Hawks beyond the fact that they’ll be pretty fired up to play at the Crisler Center and have some holes to fill on the roster.

Last year’s No. 2 scorer and primary big man, Antonio Bivins, and highly touted freshman, Jahad Thomas, are both out for the year with knee injuries.

Akeem Williams, a 5-foot-10 senior guard, will be relied upon to carry most of the load. Williams averaged 19.9 points per game last season and has led the River Hawks in scoring since he arrived on campus three years ago. He’s a potent three point shooter, making 68-of-170 (40%) long range attempts, and also connected on just shy of 50% of his interior looks last season. He’s a scorer, not a distributor, with an assist to turnover ratio of 1.17:1 last season.

Williams is joined in the backcourt by the only other returning double-digit scorer on the roster, Chad Holley. Holley is dubbed as a “New York City-style guard with good court vision who defends very well” by the school website. He averaged 11 points per game last season, shot better than 40% from 3-point range and averaged 3.2 assists per game.

Kerry Weldon redshirted due to injury last season but started 23 games and averaged 4 points and 3 rebounds as a sophomore. The school website notes that Weldon “plays most of his minutes as a power forward” and is “capable of defending the three-through-five spots”.

Kennedy Chukwuocha started 11 games last season and averaged 6.8 points and 3.8 rebounds per game. Chukwuocha is the best (active) returning rebounder on the River Hawk roster at 6-foot-6, 205 pounds, but that points out the looming issue: that UMass Lowell lost its best big man from last season in Bivins. James McDonnell is likely to fill the void in the middle. The sophomore measures in at 6-foot-10, 217 pounds and started 18 games as a freshman, averaging 12.8 minutes, 2.1 points and 2.9 rebounds per game.

This game should provide a decent test for Michigan’s backcourt, especially on the defensive end. UMass Lowell lacks talent and experience in the frontcourt but a backcourt combination of Williams and Holley should really work the Wolverines defensively. Derrick Walton has been an impressive defender early on but he hasn’t faced anyone as good as Akeem Williams thus far. Nik Stauskas is in better shape but can he keep up with a 6-foot guard? Caris LeVert has emerged as arguably Michigan’s premiere defenders and could draw one of the match-ups. Regardless of individual performances, the coaching staff’s defensive trust will become apparent based on who draws what match-ups defensively.

Jon Horford scored just six points in two exhibition games and Jordan Morgan hasn’t looked completely comfortable at the four spot. Both players have another great opportunity to make a statement against an underwhelming frontcourt. Because the River Hawks are likely to play a 6-foot-5 or 6-foot-6 style player at the four position, this game will also serve as a barometer as to just how comfortable John Beilein is with the “two big” lineup in live competition.

Ken Pomeroy’s model projects an 80-55 Wolverine victory in a 65 possession contest (I couldn’t tell you how Pomeroy’s model accounts for new Division I teams) and it would be a surprise if this game was close.

This & That: Michigan will honor last year’s Final Four team before the game by raising a banner and handing out Final Four rings. Pick to Click will be a Big Ten only feature this season. The last time UMass Lowell faced a Division I foe was a 100-62 exhibition loss at UConn last year. This is the first of four years that the River Hawks won’t be eligible for the postseason as part of the NCAA’s mandatory transition period. This game was scheduled because Duquette knew Bryant head coach Tim O’Shea, who hired Pete Kahler, Bacari Alexander and Brian Townsend at Ohio University and got in touch with Kahler.  Ryan Restivo profiled Duquette for Big Apple Buckets. Michigan-UML is the fifth least appealing opening day game between Division I teams on Ken Pomeroy’s FanMatch feature.