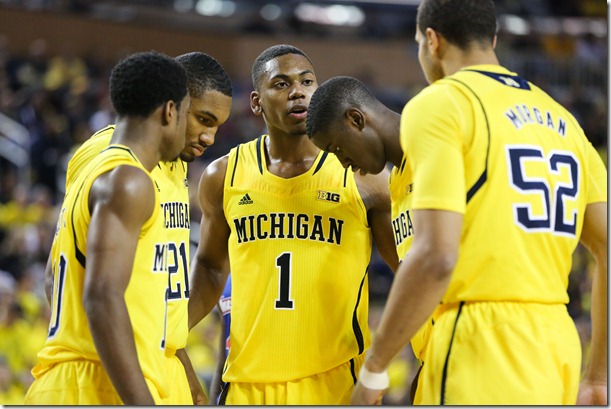 It took Michigan a while to realize that the regular season had started but eventually the Wolverines regained their form and topped UMass Lowell, 69-42.

Last year’s Michigan team set unfair an unfair precedent for non-conference performance. That group lost just one game to a non-conference foe, the National Championship against Louisville, and scored the ball at a proficient rate every time they touched the floor. They certainly didn’t have 23 point halves against America East foes. On a night when last year’s accomplishments were celebrated during pregame festivities, a brick filled first half against a team playing its first Division I game was the last thing on anyone’s mind.

But a spirited defensive performance in the second half fueled the sort of performance that everyone expected and eventually talent won out. Caris LeVert and Zak Irvin led a Wolverine effort featuring eight different scorers after just three Michigan players found the score sheet in the opening half.

Michigan’s offense was as awful in the first half (.82 points per possession) as it was great in the second half (1.42 points per possession). The first half offensive performance was due predominantly to dreadful shooting: the Wolverines posted a 28% effective field goal percentage (36% on twos). UMass Lowell prevented transition opportunities well and Michigan sputtered in the halfcourt.  The Wolverines consistently crashed the offensive glass and got to the free throw line in both halves and that was the difference. Whether Beilein suddenly has an offensive group capable of doing both of those things consistently, or they are just a product of a massive talent gap remains to be seen.

Assists tell the story of Michigan’s offensive production. The Wolverines had just 2 assists on 5 makes in the first half compared to 11 assists on 14 makes and two turnovers in the second half. The second half numbers are something of the norm for U-M teams which made the first half performance particularly unsettling. Michigan’s offense has relied on a lot more dribble-drive action and the spacing and movement was significantly better in the second half.

The new NCAA-mandated fouling points of emphasis were on full display. Michigan attempted 32 free throws to just 53 field goals for a 60% free throw rate. The Wolverines were whistled for just 11 fouls while UMass Lowell committed 24 fouls. Michigan earned the freebies as Robinson (10 FTA), Stauskas (8 FTA) and LeVert (5 FTA) were all aggressive attacking the basket. We haven’t seen this sort of free throw production on a consistent basis from a Beilein-coached team and it’s developing into a trend against subpar competition. On the flip side, the adjusted block-charge interpretation is going to be an issue for Michigan’s defense. The Wolverines didn’t take a charge in the game and were whistled for a handful of blocks, several which probably would have gone the other way in recent seasons.

Other than a few blocking fouls, the Wolverine defense was dominant. UMass Lowell managed just 42 points in 62 offensive possessions and a handful of them were easy buckets off live ball turnovers. Michigan forced turnovers once every four possessions and kept the River Hawks off the charity stripe and the offensive glass. There will be a learning curve but this U-M team has the ability to be one of John Beilein’s best yet defensively, especially with Mitch McGary added back into the fold. Caris LeVert, Derrick Walton and Glenn Robinson III all had above average defensive games and UMass Lowell’s best guard, Akeem Williams, had as many made field goals (6) as turnovers.