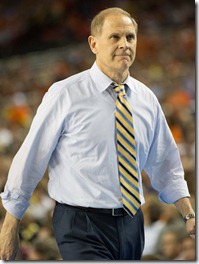 On Friday, before the Wolverines take on UMass Lowell in their first regular-season game, they will have a chance to reflect on one of the greatest seasons in Michigan basketball history.

They will do this by watching a Final Four banner be raised to the rafters of the Crisler Center (at 6:40 p.m., 20 minutes before tip off). And for a moment, undoubtedly, John Beilein will feel memories of last season come rushing back — the crushing loss to Indiana at home, Trey Burke’s impossible shot against Kansas, all of it.

But make no mistake — the reverie will last exactly one minute at the most, probably less.

“It’s 30 seconds, it’s a minute, it’s pretty cool and you reflect for a moment, and then you think, ‘what’s the next play?'” Beilein said during a press conference on Thursday.

“I know it’s going to be a great day. We’re also going to hand out the Final Four rings, as well. The Michigan version of them,” Beilein elaborated. “We’re excited about that and our kids should be excited about that. It’s great for our young guys who weren’t part of that last year to look up at that, because there was a lot of work that went into this particular banner that’s going up. A few of the guys will be back, obviously not all of them from last year. We’ve got a couple managers and a few of the players. It’s going to be a good day.” (Photo: Dustin Johnston)

Beilein has seen his fair share of banners go up over the years. He saw them at Canisius and Richmond, and he saw one raised at West Virginia after the Mountaineers made a run to the Elite Eight.

“All those times are special,” Beilein said.

But despite all of those banners, and having already raised a Big Ten championship banner here at Michigan, Beilein still finds himself oddly fascinated by the same thing that fascinates him about basketball: the logistics.

“I always look at it and think, ‘how are they doing that? Who’s pulling those pulleys? How does that work?” Beilein said with a laugh. “And then all of a sudden it’s up there.”

Big men progressing in McGary’s absence, Donnal’s redshirt up in the air

With the revelation on Thursday that Michigan sophomore Mitch McGary will be out for a longer period of time than had been previously assumed — he could possibly miss the entire non-conference season — the natural questions surround McGary’s potential replacements.

Most notably, Jon Horford has been showing progress throughout the preseason. His rebounding numbers have been very good in Michigan’s two exhibition games (just shy of 10 rebounds per game) and he holds the playing time edge over Jordan Morgan so far.

Both Horford and Morgan will be called upon to replace McGary.

“I really like what Jon has been able to give us,” Beilein said. “You haven’t seen it in numbers right now, but he’s stayed out of big foul trouble. He had that second foul in the first half. His rebounding, he’s playing much bigger; he’s keeping his elbows up higher. So that’s been good for us. Jordan in his first game had some good moments, in practices he’s been good. The big factor is, how much can you do. You’re waiting to see what Mitch can do at full go. Both of them have shown some good spots.”

Another reactor in the McGary situation could be the outlook of freshman Mark Donnal’s redshirt. With the assumption of McGary’s speedy recovery came the assumption of Donnal redshirting because of the obvious logjam in the post.

Beilein said he will wait as long as he has to make a decision on whether or not to burn Donnal’s redshirt.

“It’s all based on practice, really, based on need. We’ve talked about the last couple of days and (Donnal) has had some really good practices, too,” Beilein said. “You’re not going to make that determination now, you’re just not going to burn it now. It could be a Caris situation if we feel we need him down the way. But he’s made some great leaps in the last week and you’ve got to think about it. Right now, the whole idea is, let’s save his redshirt for as long as we can and only use it if we absolutely have to because it’s the right thing for the team but it’s also the right thing for him.”

Just a year ago, Michigan left Caris LeVert on the bench for the first six games before opting to burn his redshirt in December. The choice paid off as LeVert made an impact and accelerated his growth toward this season.

Lineup still in flux, likely to continue that way

With the likelihood of Michigan playing against teams that employ stretch fours, along with the thus-far ineffectiveness of Michigan’s two-big lineup, comes the possible arrival of a lineup with a particularly catchy nickname, bestowed by Beilein.

He termed it “the sixty-six lineup.” He was referring to playing Caris LeVert at point, Nik Stauskas at two, Zak Irvin at three, and Glenn Robinson at four. That’s four players on the perimeter who stand at 6-foot-6.

Sure hope no one grows an inch and throws off the symmetry.

Beilein, for his part, is thankful for the options a lineup like that provides.

“I think it allows us to, when someone is even having a bad night, even foul trouble, go in a different direction,” Beilein said. “When we play that sixty-six lineup with the two 6-6 kids out front and the two 6-6 kids in the corners, that’s a good one too. It’s the most comfortable I’ve felt being four deep being at the two guard positions.”

For the players, it means everyone learning different positions in the offense — you have to be ready to play everything.

Beilein wasn’t ready to name his starting line up quite yet but made it clear that he was comfortable with it.