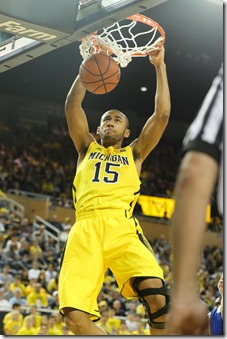 Michigan fans have to reach a ways back in the recent history of the basketball program to remember the last time they saw a Wolverine big man consistently post up on the block and actually get the ball in a one-on-one situation. Former Michigan forward DeShawn Sims was an expert post scorer by the close of his career as a Wolverine, and throughout the 2009-2010 season, the Detroit native did much of his scoring on the block. (Photo: Dustin Johnston)

This has been a result of both personnel and offensive philosophy. Beilein has implemented a guard-oriented offense centered upon pick-and-rolls and constant motion off that action — dumping the ball in the post and isolating doesn’t mesh with the offensive principles Michigan has lived by for the past four or so years. That, combined with the fact that Michigan hasn’t had an big man since Peedi who was obviously gifted offensively, has been the reasoning behind the lack of low-post scoring.

But in Michigan’s season opener on Friday against UMass Lowell, John Beilein showed that he may have the personnel to find opportunities for offense in the low post. Early in the second half, Jon Horford received the ball on the block in a one-on-one situation. The redshirt junior made a nice move, turned and sank a pretty fadeaway jumpshot.

While this was only one play, Horford hopes it’s a trend that continues to surface in the offense. I asked him if Michigan fans could expect to see more isolation post-ups from him this season.

"I hope so," Horford said after the game. "I hope we can get it in the post because it really just opens things up for everyone else. It’s something, like you said, that isn’t really a Michigan staple, so we’re still getting used to it. But as the year goes on, I’m sure we’ll go to it more and more, and I feel like it will benefit everyone."

It wasn’t just Horford who was getting in on the post-up action — we also saw how Michigan’s versatility can open up opportunities for other players in the paint. Glenn Robinson III is obviously a matchup nightmare for almost any defender, but when you’re 5-foot-11 UML guard Akeem Williams, it’s especially daunting taking on the 6-foot-6, 220-pound sophomore. Robinson twice posted up on the block when he saw that he was mismatched, and both times he forced a foul from the smaller player.

This wasn’t necessarily part of the new post-up wrinkle in the offense — it was just a smart basketball move. However, it did show how dangerous Michigan’s much-hyped versatility can be on offense if Robinson and others are willing to be physical against smaller players on the block.

"(Posting up is) not a new wrinkle, we’ve been running that play," Robinson said. "I had smaller guards on me, so I just told them to look in and throw it and I’ll shoot right over them."

While it might not be a new wrinkle to Robinson, it’s something the 6-foot-6 sophomore might not have been as comfortable doing a year ago. Robinson had just three post up possessions in 39 games last season.

Michigan fans were waiting to see this season whether or not Mitch McGary would be given free reign to post up and take on defenders in one-on-one situations, but it appears Michigan won’t be waiting for McGary to come back to debut the new look on offense. It appears Horford will be given a chance to prove himself as a legitimate scoring threat in the post.

Spike Albrecht said after the game that he and his teammates will be looking for Horford more on the low block, and not just for the opportunities it affords the big man — it also helps the rest of the offense.

"Yeah definitely (we want to get Horford the ball in the paint). Hoford’s put in a ton of work with his post game," Albrecht said. "We try to get him the ball more. He gets the ball down low, guys come down and he can kick it out, that’s another asset to our offense."

It’s been a long road for Horford during his time with the Michigan program. The Grand Ledge native has fought through injuries and lack of opportunity to get to where he is now, with a chance to contribute substantively on offense for a young team that will need him to step up in the absence of McGary.

John Beilein said he wants to get Horford more looks in the post, and the big man will be afforded plenty of chances to prove himself.

"Obviously, (getting Horford the ball in the post) is something we’d like to do," Beilein said. "That was Jon’s first of many, I hope, post-up baskets. Because he can do it and now he has to do it in a game. He’s getting plenty of time isn’t he? So he’s going to get plenty of opportunity to do that."