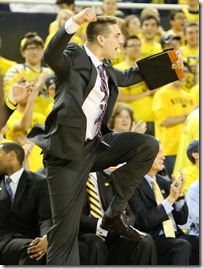 Finally, some good news for Michigan fans regarding the progress of Mitch McGary’s back injury.

After the dour news last week of Michigan’s All-American sophomore possibly being held out of game action until the Big Ten season, John Beilein offered some kernels of hope that perhaps McGary will not be out for quite that long. It’s not much, but it’s the first time since McGary’s injury was announced that Beilein has spoken of substantive progress for the big man. (Photo: Dustin Johnston)

“For the first time now, he’s done some workouts. He’s added some more repetitions in practice,” Beilein said during a press conference on Monday. “Over the last ten days, he’s had repetitions. He looks very good, and we’re going to continue increasing his repetitions.”

This is a step up from the light shooting members of the media have seen thus far during Michigan’s practices. While Beilein’s comments by no means indicate anything definite about McGary’s possible return date, they are the first explicitly positive indications of progress with concrete examples of physical healing.

McGary is more active in practice, but that doesn’t mean there is a date for his return just yet.

“We don’t have a date,” Beilein said when asked. “I think the date will be when we feel he’s really as close to  being in shape to getting in there and really play.”

One of the concerns about McGary’s return is the possibility that, given this injury has left him sidelined for so long, the big man will be out of shape when he resumes playing. While that remains a possibility, it appears that the “workouts” Beilein mentioned are meant to keep him in some semblance of playing shape while working his way back to full health.

So what has McGary been doing? Beilein said it’s been mostly no-contact, individual workouts with coaches.

“It was last week, and every other day we’ve had him for short workouts, and he’s been good, just slowly getting him in shape,” Beilein said. “Just being able to go full-speed with a coach working with him.”

Michigan will play its second regular-season game on Tuesday against South Carolina State, and after that the non-conference season begins in earnest with a trip to Ames, Iowa to play Iowa State on the road. After that, it’s the Puerto Rico Tip Off, and after a Black Friday showdown with Coppin State it’s off to face Duke at Cameron Indoor.

The Wolverines would love to have their star big man back for this somewhat grueling non-conference slate, which is what makes Monday’s news encouraging given what has come out of the program thus far regarding his injury.

In the meantime, Michigan continues to wait on McGary’s back and lean on its plethora of other scoring options. But make no mistake — while McGary may be inactive during games, during practices he has been anything but.

“We’ve been doing some things with him in practice. Why waste that time?” Beilein said. “He will chart practices. How many times he heard a guy call out a screen — we want a guy to say ball screen coverage loud and three times — he actually charts that. He charts quality screens, he charts quality sprints after a screen. That’s allowed him to really look at the game. So Bacari came up with that idea to keep him engaged in practice and it’s been very helpful.”