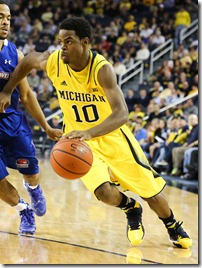 Marquee matchups during the Big Ten season are laced with familiarity and history. Facing off against Aaron Craft or Adreian Payne is just one chapter in an ongoing war but non-conference play is different. The games still matter, but everything is a bit more unique and exciting. Whether it’s a unique venue or a high profile individual matchup, the games feel different. Michigan’s non-conference schedule features a number of impressive opponents including Duke, Arizona, Stanford, Iowa State and the Puerto Rico Tip Off which should provide plenty of intrigue. Here are six individual matchups that caught our eye (sorted by date). (Photo: Dustin Johnston)

This one is about history. Morris and Walton have gone head-to-head for a while now. The duo played for a scholarship offer at Michigan’s College Practice Camp in 2011. They faced off in high school. They battled for Mr. Basketball in the state of Michigan last season (Walton won more first place votes, Morris won the award). In summer of 2012 they played on the same Michigan Mustangs AAU team that won the Adidas Super 64 in Las Vegas. They’ve always been battling for the distinction of being the top point guard in Michigan but the stakes will be raised this weekend Michigan travels to Iowa State. Morris is backing up transfer guard DeAndre Kane at the point guard position but will play significant minutes. He scored nine points and handed out three assists in Iowa State’s season opening win.

How about a battle of Canadian shooters? Naz Long hit 8 of 11 three-pointers in his first game of the season, tallying 26 points, and grew up in Mississauga, Ontario. Sound familiar? Long grew up in the same town as Michigan’s own sharp shooter, Nik Stauskas. While they didn’t face off much during their prep years (Long spent his sophomore and junior seasons at Prep school and his senior year back in Canada while Stauskas played at prep school for his junior and senior seasons), there’s certain to be some familiarity and trash talk. Long hit just five threes last season, but should play a much bigger role this season.

This matchup isn’t even guaranteed (VCU and Michigan both have to win first round games at the Puerto Rico Tip Off) but it has mouthwatering potential. Trey Burke’s performance in Maui as a freshman set the tone for his season and Walton will have a similar opportunity. There’s something reassuring about seeing a freshman guard seize the spotlight in a challenging early season tournament game. Michigan handled VCU in the NCAA tournament a year ago and Shaka Smart’s team will be hungry for revenge against the Wolverines.

Briante Weber was the best pickpocket in the country last season, recording steals on 7.2% of VCU’s defensive possessions while he was on the floor. The college basketball rule changes could effect ‘Havoc’ but so far the results are just fine. Weber had eight assists and five steals in VCU’s season opening win against Illinois State, who turned the ball over on 27% of its offensive possessions.

Superstar freshman Jabari Parker and transfer wing Rodney Hood were a combined 17-of-20 (5-5 3pt) from the floor in their Duke debut against Davidson on Friday. Parker is one of the top freshmen in the country and projected as a top-five pick but Hood, a transfer from Mississippi State, has actually led the Blue Devils in the scoring throughout early season play. Both players stand 6-foot-8 and have guard skills, posing extremely difficult matchups for Robinson at the stretch-four (“big wing”) position. Robinson has the versatility to match either player but has never been known as a great defender and all eyes will be on him at Cameron Indoor.

NBA scouts will flock to the Crisler Center in December to watch this matchup. Gordon is expected to be a lottery pick in June at next year’s NBA Draft while Tarczewski is an experienced big man to round out the the talented frontcourt. McGary and Robinson don’t matchup perfectly with the big Arizona front court and Jordan Morgan could be needed for defensive reinforcement against the two-big look. Gordon is a high level athlete at 6-foot-8 with some versatility on the perimeter and one of the few players with the athleticism to match Robinson.

Powell considered the NBA after last season but is back for a senior year. The 6-foot-10, 235 pound big man developed into one of the best rebounders in the Pac-12 and also a consistent scoring threat. Powell averaged 15 points and eight rebounds per game last season and will provide a great test for Mitch McGary in front of a national audience at the Barclays Center in Brooklyn. With the Arizona game a week prior, these two games could be a huge test for Mitch McGary and one that the Wolverine coaching staff will certainly want to have their All-American healthy for.