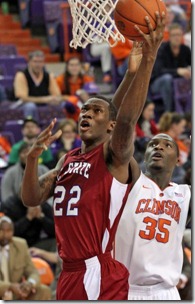 Days after hosting a team playing its first Division I game, Michigan is set to play a team projected among to finish 340th of 351 Division I teams. South Carolina State returns four starters from a team that tied for last place in the MEAC last season but will have to break in a new point guard and a coach that took the team over in the middle of last season.

Murray Garvin took over the program last February when previous head coach Tim Carter resigning after losing 14 consecutive games. Garvin guided the Bulldogs to two wins in their final nine games and had the interim tag removed this season.

South Carolina State has already played two games this year and is off to a 1-1 start. The Bulldogs lost at Marshall in an 80 possession track meet, 85-69, on Friday but bounced back with an overtime win over Division II foe St. Andrews Presbyterian, 59-55, at home on Sunday.

Despite returning four starters from last year’s team, Garvin is still trying to figure out his rotation. Fifteen Bulldogs played in South Carolina State’s season opening loss at Marshall and 13 played at least 10 minutes. Although 13 different Bulldogs scored in the opener, Matthew Hezekiah was the only player to score more than six points. Garvin refined his rotation in Sunday’s win, leaning on an eight man rotation and finding two double digit scorers.

Matthew Hezekiah is a Preseason All-MEAC post player that averaged 13.4 points and 7.4 rebounds per game last season. He has a number of qualities that are rare to see at the MEAC level, especially on a squad that finished in the cellar. Hezekiah has legitimate size – 6-foot-11, 235 pounds – and is an efficient finisher. He shot 56% inside the arc last season and is also an effective shotblocker and offensive rebounder. Through two games this season he’s averaging 18 points and 5.5 rebounds per game on 16-of-23 shooting.

Hezekiah is shooting 69.6% from the floor but his teammates are a combined 32-of-94 for a 40% effective field goal percentage. He doesn’t have much offensive support.

Senior point guard Adama Adams played significant minutes last season, but not as the primary Bulldog point guard. This year he’s stepped into that role and is the only South Carolina State player other than Hezekiah to reach double figures. Turnovers have always been an issue for Adams, he gave the ball away on 30% of his possessions last season and has already coughed the ball up nine times in 44 minutes this season.

Darryl Palmer and Devin Joint both started last season and will play significant minutes on the wing. Palmer, a 6-foot-7 forward, was named to the MEAC All-Rookie team. He’s a solid rebounder but is just 4-of-17 from the field through two games. Joint is tied for the team lead in assists with five while Jordan Smith, another rotation player, leads the team in 3-point attempts (3-of-10).

The Bulldogs will look to their bench and rotate through a number of options but there aren’t many that can be relied on.

South Carolina State ranked 311th or worse in three of the four factors last season with a 42 eFG%, 22.8% turnover rate and 27.3% free throw rate. There’s little reason to believe the Bulldog offense will improve after losing their best setup man and primary offensive option. Offensive rebounding has been one staple of the South Carolina State program. The Bulldogs rebounded 36% of their missed shots last season and have rebounded 39% of their misses through two games this season.

That rebounding prowess hasn’t translated to the defensive end of the floor. South Carolina State ranked 339th in defensive rebounding last season, allowing opponents to grab 37.5% of their misses. Those issues don’t appear to be fixed just yet, St. Andrews rebounded 39% of their missed shots on Sunday. Other than rebounding, last year’s Bulldog squad was below average across the board in eFG% defense and forcing turnovers. They did force St. Andrews to cough the ball up on 39% of its offensive possessions and still needed overtime to knock off the Division II foe.

South Carolina State doesn’t look like the kind of program with the discipline to slow the game down, avoid turnovers and stop Michigan’s transition offense. There won’t be any 23-23 halftime score in this one, look for Michigan’s offense to open up early on. However, the Bulldogs do pose some unique challenges for Michigan’s oft-questioned frontline. The Wolverines haven’t faced any big men of Hezekiah’s caliber and he should provide a stronger test of how prepared Jon Horford and Jordan Morgan are to defend without Mitch McGary.

SCSU’s offensive rebounding should also pose a test. The Wolverines defensive rebounding hasn’t been bad in early games, but it’s a lot easier to rebound against teams that lack any real size. The Bulldogs have the size, athleticism and mindset to impact the offensive glass not usually found at the low-major level.

Ken Pomeroy’s system projects a 82-54 Michigan win in a 66 possession game. The recipe to beat Michigan recently has been to slow the game down and avoid turnovers, eliminating the transition game. UMass Lowell was able to do that for 20 minutes, but South Carolina State isn’t built for that. Michigan should have ample opportunity to run against the turnover prone, aggressive offensive rebounding Bulldogs.

This & That: Mitch McGary has resumed practicing (in individual sessions) but is still out. Five Key Plays isn’t dead but we’ve had trouble pulling video from BTN-Digital, look for the feature to make a return after Iowa State.