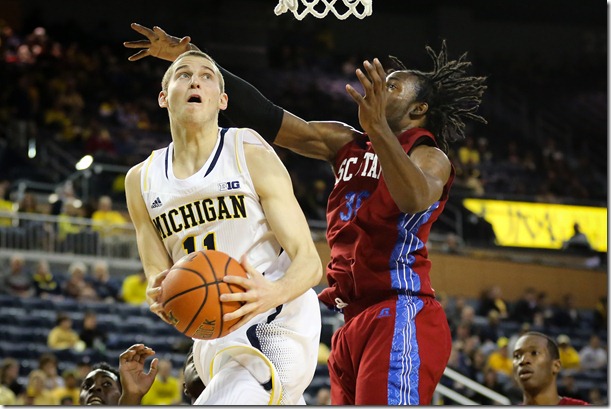 After a rocky start to its first game of the season, Michigan wasted no time jumping in front of South Carolina State on Tuesday night. The Wolverine offense played a flawless first half to open up a 59-23 halftime lead before slowing down in the second half and coasting to a 93-59 victory.

Last year’s Michigan team was among the best transition teams in the country because of Trey Burke’s ability to pick opponents apart on the break. Michigan doesn’t have a perfect replacement for Trey Burke (although Derrick Walton’s not a bad point guard himself) but it has an alternative approach: a stable of wings that can make plays for others, shoot the ball and attack the basket.

South Carolina State insisted on crashing the glass but came up empty handed and left itself vulnerable on defense. Nik Stauskas and Caris LeVert made the Bulldogs pay. Michigan’s devastatingly efficient wing guards both posted career highs, combining for 47 points on 13-of-18 shooting, with 11 threes, nine rebounds and nine assists on the night. The Wolverines don’t have a point guard to replace Trey Burke’s production, but they might not need one with the sort of wing play they’ve had to open the season.

Michigan’s offense was nearly perfect in the first half, scoring 1.72 points per trip and posting a ridiculous 87% effective field goal percentage – connecting on 12-of-19 threes will always make the statistics look impressive. The hot shooting cooled in the second half as Michigan managed just .97 points per trip. Despite the second half regression, this was still an impressive offensive performance with 93 points on 70 possessions and an effective field goal percentage of 63%. The SCSU defense really struggled to find shooters, especially in the first half, and you can’t do that against a team as potent as Michigan offensively. The Bulldogs played some sort of amoeba match-up zone look that just didn’t work very well.

Michigan’s defense also regressed in the second half. The Wolverines stymied the Bulldogs in the first half, surrendering just .67 points per trip, but allowed a shade over a point per possession in the second half. Overall it was still an adequate defensive performance. The Wolverines forced Matthew Hezekiah to miss five of his first six shots and cleaned up the defensive glass against a very good offensive rebounding unit. It was disappointing that Michigan couldn’t force more turnovers against a team that struggles in that department. The last time SCSU turned the ball over on 13% of its possessions or less was on February 25th, 2012.

It’s a lot easier to justify playing a lackadaisical half in the second half after opening up a 36 point lead than it is to be tied at 23-23 against UMass Lowell. However, the Wolverines were outscored against an obviously sub-par team in the second half. Michigan has played one really great half and one pretty underwhelming half in each of its first two games. The Wolverines will have to raise their level of execution across the board on Sunday as they jump into the meat of the non-conference slate. First up is a trip to Iowa State on Sunday and then it’s off to Puerto Rico. Add in a trip to Durham and we’ll have a lot better idea of what this team is capable of.