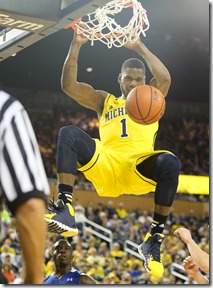 Last year, the Glenn Robinson III Michigan fans saw was one who made plays off the ball, finished at the rim and created offense through rebounds, back cuts and other residual action off initial pick-and-roll sets. In other words, Robinson was not a player who created his own offense — rather, he relied on other playmakers on his team (notably Trey Burke) to create opportunities. (Photo: Dustin Johnston)

Because this is what Michigan fans saw last season, the role of offensive facilitator Robinson is stepping into this year was seen as uncharted territory for the sophomore wing.

But really, Robinson has been here before — at St. John High School.

“It definitely does,” Robinson said when asked if his experience at Michigan reminds him of his high school days. “My freshman year of high school, I was the same way I was last year in my freshman year of college. Kind of laid back, we had captains, we had leaders, people who stepped up and took those bigger shots and were more of offensive threats. My sophomore year, I came back and I had to be the man, the leader and step up and do some different type of things for my team. It’s sort of the same thing, and I just look forward to it.”

Last year, Robinson deferred; but really, the leadership role he’s taking on right now, both on the court and in the locker room, is far more familiar to him than the space he occupied last season.

That doesn’t mean he hasn’t taken the challenge seriously. Robinson’s vast improvement from last year is glaringly evident, according to John Beilein, even if this year’s small sample size hasn’t shown it in games quite yet.

“The most obvious one is his ability to get to the lane and unselfishly find people. He’s really done a terrific job with that,” Beilein said. “He’s improving daily, and it’s not like he was bad. Shooting on the move, is a thing a lot of guys don’t come in with, shooting while they’re moving, and that has improved tremendously. None of these things have ever been bad, but obviously he’s going to keep getting better.”

We focused on Michigan’s defense pretty extensively in the immediate aftermath of its win over UMass Lowell on Friday. A brief recap: the Wolverines forced held UMass Lowell scoreless for over 10 minutes in the second half and forced River Hawks to turn the ball over on 31 percent of their second half possessions. UMass Lowell’s .70 points per possession for the game would have been Michigan’s third best defensive performance of the season.

Beilein referenced Michigan’s versatility — and abundance of 6-foot-6 players with quick feet — as the main reasons why its defense was so dominant in its first regular-season victory.

“The offense we were going to see against Lowell, we decided we had to do that. They were just going to spread us out, dribble the ball, take the shot clock down,” Beilein said. “We just needed to be solid, It was very helpful to have that type of versatility between several of our players, as we continue on, teams will counter it and we’ll have to find ways to counter that. But it is good to not have all those different shapes out there at the three or four. That same thing, it gives you great flexibility.”

But it’s not just the players’ length that made Michigan so successful defensively — it was their increased defensive awareness, especially from its sophomore leaders.

Beilein cited Robinson in particular as a player who’s made strides defensively.

“(Robinson) is becoming that third-level defender,” Beilein said. “He saw two or three actions that Lowell was running the other day, and he told Caris (LeVert) what to do before Caris knew what to do. So he’s seeing the floor, seeing his own man, and helping other people. Those are three big things for him.”

Derrick Walton has only played one official game as Michigan’s point guard but his performance was solid. He’s stood out on the defensive end of the floor – he registered three steals against UMass Lowell – somewhere that many freshmen struggle.

But what Beilein wants to see is how Walton responds to different teams displaying different offensive strategies against Michigan, and how the freshman will adjust.

“He picks up things very quickly,” Beilein said. “His quickness in small spaces right now is really excellent, the way he’s picked the ball away from people. That ability to be one of our best guys in steals. He’s really done a good job. Now we just need to get him more minutes, get him to understand different defenses and how they’re attacking us. Everyone will have a different scheme against us, and for him to just absorb all that does take time.”

On the offensive end, Beilein wants to see Walton be assertive and look for his shots. As a primarily pass-first point guard, Walton has the tendency to be passive when the team needs him to look to score, specifically on the fast break.

“His excellent passing ability cannot be — the strength cannot be his weakness,” Beilein said. “He can’t be a passer when he should be a shooter and a scorer. I think we saw him when he went down the right lane and scored in transition. He’s got tremendous speed, we want him to use it.”