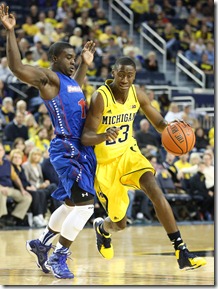 All last season, Michigan fans heard about the prodigious skill of Caris LeVert from John Beilein. In practice, his defense was great, he made unbelievable plays — in fact, it turned out he was simply too good to redshirt.

But in 10 minutes of playing time per contest last year, the freshman didn’t really stand out. There were brief flashes of talent, but other than that, not much.

This season, however, the sophomore from Pickerington, OH is proving his coach prophetic.

In the admittedly small sample size so far provided by two exhibition games and two regular-season contets, LeVert has proved that he is the most improved player on the team. After coming off the bench for the two exhibition games as Michigan experimented with its two-big lineup, LeVert started against UMass Lowell and played well offensively, scoring 17 points on 6-for-11 shooting.

Those 17 points were a career high, but that mark didn’t last long. On Tuesday, LeVert was even more impressive, catching fire from the 3-point line against South Carolina State. The sophomore stepped on the court firing: he hit six threes for 24 points on 7-for-11 shooting on the night.

Even more than the somewhat astounding numbers, what stands out about LeVert is his confidence. It feels like he knew exactly how much he progressed this summer and was simply waiting for a chance to prove it.

Fellow sophomore Nik Stauskas, for his part, has noticed an uptick in LeVert’s confidence. But, he added in a refrain familiar to Michigan fans by now, he said LeVert has had this in him since he arrived in Ann Arbor.

“Last year, we knew Caris was capable of this,” Stauskas said. “The coaches saw last year that the talent was there. Especially this offseason with him really improving and investing time in his body, you see it out there in how confident he is and how well he’s playing on the floor offensively.”

So far this season, LeVert has stepped into many different roles — from point guard to rebounder to lockdown defender to lights-out shooter. That last role was the one he occupied on Tuesday, and it sounded as though he had a great time.

One area that has impressed Beilein the most is LeVert’s ability to run the fast break and the speed at which he can traverse the length of the court. During the brief moments of practice open to the media thus far, Michigan ran a drill in which a player rebounds the ball and sprints down the court attempting to score in under four seconds. LeVert was always the fastest player in the drill.

Pairing that with his length and rebounding ability, Beilein sees an almost Tim Hardaway Jr.-esque player capable of corralling rebounds and then immediately starting the break.

“He’s gotten stronger number one, but north-south, he’s a quick son of a gun,” Beilein said. “When he gets going downhill, he’s tough to stop. So we try to put him in those situations. He may be, right now, our best speed guy on the fast break with the ball, just going, and still playing with his feet on the floor (maybe reference drill from practice?). It’s been a great addition to his game. And then you turn around and he has the capacity to be one of our best defenders, as well.”

And there is the the other dimension of LeVert’s progression as a player. The sophomore spent all summer in the gym and is now able to body other players in a way he wasn’t able to last season. LeVert’s length on the perimeter makes him a hound in passing lanes, but his on-ball defense has definitely improved as well.

LeVert said that, physically, he’s not yet where he wants to be.

“I’m definitely trying to put on more weight,” LeVert said. “I’m in the 187-pound range right now, so just getting closer to 200, closer to where Tim was, that’s kind of a short-term goal for me. … Just being able to play longer, play harder when I’m out there. Rebounding, playing defense, it’s really helped me a lot this season.”

LeVert said he’s reached a level of confidence and comfort that has allowed him to unleash a skill set he’s always had but simply wasn’t ready to display last season. Now, not only is LeVert living up to the expectations laid out for him by his coach last year, his skills are catching some fans by surprise.

His level of production on Tuesday was certainly surprising to fans, but not to Beilein.

“He is a nightmare on a closeout, which is what the game has become,” Beilein said after Tuesday’s victory. “When someone has to go get to him, he can either shoot it in or go by you. And his seeing the floor is huge for us. The way he’s shooting the ball, this is the way he’s been shooting a lot during the fall period, so he does give us one more additional player out there who can stretch people.”