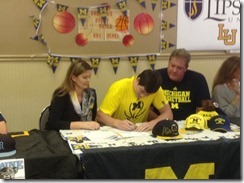 Michigan officially signed two class of 2014 recruits this afternoon and more should be on the way.

Ricky Doyle signed his letter of intent at 3 p.m. and DJ Wilson signed at 4:30 p.m during a ceremony at his school. Kameron Chatman is expected to sign later today at 9 p.m. eastern. Austin Hatch, the fourth member of Michigan’s class, has yet to return to full game action after a plane crash in 2011. Hatch’s signing plans have not been confirmed.

Wilson explained the decision to commit to Michigan in an update with the Sacramento Bee:

“They had all their assistants out here, including LaVall Jordan, who recruited me,” Wilson said. “Then coach Beilein came and met with the faculty and staff of the middle school and the high school. He toured the campus. That all took me by surprise. It showed that they were really interested in me. That was a big plus.”

Doyle confirmed his signing to MLive and said that he’s excited to try to get on the floor next season.

“If I play my freshman year, awesome, it’s a dream come true,” Doyle said. “If Mitch stays or there are other guys ahead of me, that will just motivate me even more to get on the floor and prove myself.”