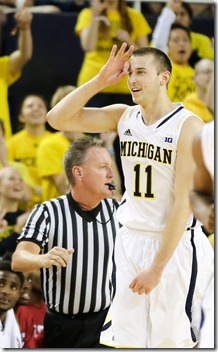 South Carolina State picked the wrong team to leave open on the perimeter.

Michigan’s 93-59 trouncing of the Bulldogs was an endless loop of drawing the shakily-assembled defense into the paint, and kicking it out to an impossibly open Wolverine. Michigan shot 28 3-pointers on the night and made 15. They were so open they were practically obliged to take them, which they were more than happy to do.

South Carolina State was playing what looked like a matchup zone, but the defense was constantly shifting. Whatever they were playing, it looked to be based in zone, whether it was 2-3 or 3-2 or some other variety.

“I think this team (Michigan) can get open looks against a lot of zones,” John Beilein said during the press conference following the game on Tuesday. “We have enough skilled guys to do that. It was the idea of pushing the ball to the rim. We didn’t get to the foul line a lot, but they sort of shrunk their defense into the paint and we could find a lot of open corner threes in particular.”

Michigan’s white-hot shooters featured one name that is familiar from last year, and one that is becoming so this season. Nik Stauskas made five of his six attempts from downtown — which isn’t unheard of — but the sharpshooter was joined (and outdone) by Caris LeVert, who hit six of seven attempts and was the team’s leading scorer with 24 points.

LeVert hit five of his 3-pointers early on in the first half, and Stauskas’s makes quickly proceeded them. Was there perhaps a slight intra-squad competition between the two? LeVert denied it.

Stauskas was mum on the subject, only remarking on the display of firepower by the two sophomores.

Stauskas added that after initially being confused by some of the looks South Carolina State was giving them on defense, the Wolverines fell back on a strategy that ended up working out for them.

When in doubt, attack the basket.

“It was tough to see what kind of defense they were in,” Stauskas said. “Sometimes it seemed like a man, and sometimes it looked like a zone. So we were just trying to attack the key. Whenever you get into the middle of the key, good things are going to happen. We had a lot of guys who were passing the ball well, driving the ball well, and any time you can kick out for open threes, you can’t complain about that.”

Beilein also attributed his team’s shooting success to its attacking style offensively. However, he also noted that Michigan spent most of its time getting out on the fast break and not allowing the Bulldogs to settle in to their defense.

“They were spreading out, there was 3-2, there was 2-3, they were pressing us,” Beilein said. “But most of the time in that first half we were in transition offense because of clean rebounds and a fast break. … We didn’t run a lot of plays today. We just played ball because of the nature of the fast break.”

Even more than the hot shooting from deep, Michigan can thank its ability to share the ball for this victory. Players were attacking the basket constantly, but they were doing so with an eye toward finding their teammates because they saw the way the defense was collapsing.

The evidence? 19 assists on 31 made shots. That and sticking with the hot hand were instrumental to Michigan’s success on Tuesday.

“There was no question when Caris got it going, they love Caris LeVert, and I wasn’t taking him out until he missed one, because he did need a rest,” Beilein said. “Same thing when Nik (Stauskas) gets it going. They really look for each other and we preach it as much as we can: when someone has it going, let’s find him. And we did that.”

Caris explained the key to the game in his usual no-nonsense manner:

“Guys were knocking down shots today,” LeVert said. “That’s the key to it, right there.”