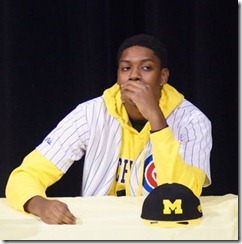 Kameron Chatman became the third Wolverine to officially sign for the maize and blue on Wednesday night after he signed his letter of intent at Self Enhancement, Inc.

Chatman is the highest rated recruit in Michigan’s ‘14 class. The 6-foot-7 wing is the No. 36 player in the country and a consensus four-star prospect. Although he stat out his last high school season due to transfer issues, he averaged 15.8 points and 9.8 rebounds per game on the Nike EYBL travel circuit over the summer.

Chatman, often described as a point-forward, was the third Wolverine to make things official after Ricky Doyle and DJ Wilson signed earlier in the day on Wednesday.

Here’s video of Chatman at the signing ceremony from Oregon Live:

Austin Hatch is the final member of the 2014 class and his signing plans are currently unknown. Hatch committed in 2011 but hasn’t played organized basketball since a tragic plane crash in June, 2011.