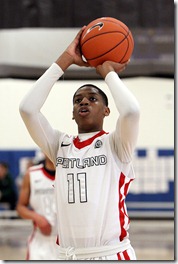 “I love the potential of this recruiting class,” said Beilein of the four-member class. “They are outstanding young men who love the game and all bring something different to our program.”

Currently a senior at Columbia Christian High School, Chatman did not play varsity basketball during his junior season after being ruled ineligible following a transfer to Long Beach (Calif.) Poly. Despite not playing on the varsity team, he averaged 25.0 points, 10.0 rebounds and 6.0 assists playing 14 junior varsity games. Prior to his transfer to Poly, he played two seasons at Jefferson High School in Portland, Ore. As a sophomore, he averaged 9.4 points, 9.7 rebounds and 4.4 rebounds helping the Democrats to a 15-11 record.

“Kam has a unique ability to play either guard or forward because he is both an excellent rebounder and passer,” said Beilein. “His versatility and ability to see the floor gives him the potential of being an excellent playmaker, scorer, and defender for us at many different positions.”

Wilson, who has a 7-3 wing span, is a senior at Capital Christian School, who has gone 52-11 and shared the Golden Empire League title over the last two seasons. As a junior, Wilson averaged 9.7 points and 4.6 rebounds helping the Cougars to a 26-5 record. As a sophomore he tallied 8.6 points and 5.8 rebounds leading Capital Christian to a 26-6 record.

“D.J. is just oozing with potential,” said Beilein. “He is very skilled and can become an excellent combo forward for us. He has great length and can play above the rim because of his athleticism. As he fills into his 6-9 frame his outstanding work habits will be a great asset to him in his development.”

Doyle, who has a wing span of 7-2, has helped Bishop Verot to three straight 4A District 11 League titles and regional finals in 2011 and 2012. Despite missing 20 games with a foot injury as a junior, he averaged 21.7 points, 6.9 rebounds and 1.6 blocks. As a sophomore he averaged 15.2 points and 8.6 rebounds and guided the Vikings a 25-5 record and the Class 4A Regional final.

“We love that Ricky can play in both high and low post,” said Beilein. “He has a tremendous feel for the game whether he is on the perimeter or with his back to the basket. He loves contact so he is a great fit for Big Ten basketball. Our fans will love Ricky’s ‘old school approach’ to playing the game.”

Hatch, who originally hails from Fort Wayne, Ind., is spending a fifth-year at Loyola High School in Pasadena, Calif., as he did not play basketball in 2012 and 2013 due to injuries sustained in a 2011 plane crash. As a sophomore, Hatch helped Canterbury to a 17-5 record averaging 23.0 points and 9.0 rebounds.

“Austin is a consummate, high IQ player, who is an excellent shooter,” said Beilein. “He sees the floor and his teammates well and has great leadership capabilities. We are excited to have him back and playing basketball again. We expect Austin to be an important part of Michigan Basketball during all of his years at Michigan.”

Michigan loses just one player from the roster due to graduation — fifth-year senior Jordan Morgan (Detroit, Mich./University of Detroit Jesuit), who will complete his master’s in manufacturing engineering.