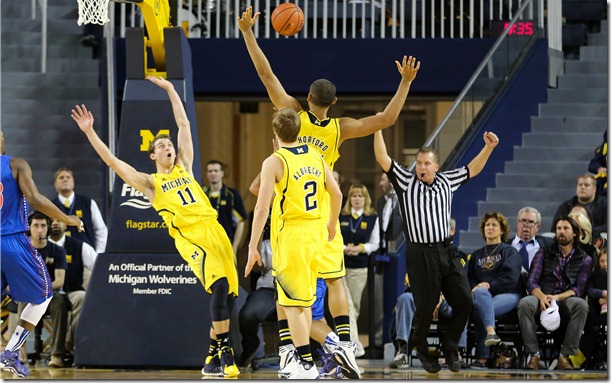 Michigan and Michigan State are widely accepted to play different styles of basketball, especially on the defensive end. So while Spartan coach Tom Izzo and Wolverines coach John Beilein share skepticism regarding the new rule changes taking place in college basketball, it makes sense that each have reservations in different areas.

“You’re not going to believe what happened,” Izzo said. “I got home last night, and I walked in the house, and my wife was sleeping, so I gave her a kiss on the forehead. A referee blew his whistle and gave me a technical.”

Izzo said he “didn’t think it was awful,” but that he say “some strange calls.” He sympathized with the referees, saying he didn’t think they wanted to call the game that way.

Michigan State is historically a team that plays a physical brand of defense, and that’s what Izzo is worried about. Beilein, on the other hand, is wary about how the new rules will affect his team’s ability to implement one of its most prominent defensive skills: drawing charges.

Michigan attempted some charges against South Carolina State on Tuesday but each time was called for a blocking foul. The new rule states that a defensive player must be in position before the offensive player begins his “upward motion” with the ball, making it more difficult for players to judge whether or not they’re actually in position at the right time.

“I think there are challenges with the charge call because I don’t think the person who’s trying to take the charge, the guy who’s coming over in help position, it’s not like he’s trying to change his mind,” Beilein said during a segment on The Michigan Insider Thursday morning. “Trying to get there is everything, and now he has to decide on upward movement.”

Saying this year will see “more blocking calls than ever,” Beilein speculated about the same thing as Izzo: will fans want to see all those free throws?

Earlier this season, John Beilein mentioned that this Michigan team is the hardest cutting team he’s ever had at this stage in the year. It was something that surprised him early on, especially from such a young team.

But against UMass Lowell, in the first half at least, Michigan didn’t show it. And it got the Wolverines into trouble.

Beilein lamented some of his cutters not following through on their cuts and giving up to early when they didn’t receive the ball on immediate action following the cut.

“Sometimes it’s late in that cut when you find him, but many people will take those first two steps, see that they might not get the ball, and short the route,” Beilein said on The Michigan Insider. “That really hurts the team because you’re clogging the middle. That’s what we saw against UMass Lowell. We made the court smaller for the defense by not making long cuts, not getting to the right spots.”

Michigan was much improved on offense against South Carolina State partly because players did a better job of following through with their prescribed movement. However, Beilein said it was also because they are getting used to the anxiety that comes with playing in a real game in front of a real crowd.

“You get anxious with these first games, and that can take the air right out of you and you get tired,” Beilein said. “So the exhibition games get you ready for that, but it’s not like the real deal.”

Today, John Beilein once again reiterated — twice, actually, on the radio and on a Puerto Rico Tip-Off teleconference preview — that coaches still don’t know when Mitch McGary will return to Michigan’s lineup.

“Well, we’re waiting for McGary’s return,” Beilein said. “Still do not know when it’s going to be, when it will happen. It will probably happen very quickly, and we are just waiting to make sure that everything is right for him to return.”

In the meantime, Michigan fans will continue to see more of Jon Horford. The redshirt junior has received the lion’s share of minutes at the five and has accumulated an impressive 27 rebounds in Michigan’s first two regular-season games.

It’s likely Horford will get his share of looks in the post, but Beilein said he needs to earn the trust of his teammates by consistently catching and finishing passes in the post.

“Jon’s worked so hard at his game. We have to throw them the ball more, but they also have to finish when they get the ball,” Beilein said. “We’re seeing Jon open a lot, we need to find him, and he’s got to do the right thing with it. If he sees traffic, he’s got to kick it back out, if he sees leverage, go in and score the ball. That could be a great addition to our game, getting more post touches. We’ve got to see him and we’ve got to hit them quickly, but they have to give confidence to their teammates every day by finishing in crowds when we do find them. I see positive things there, but we have to keep working at it.”