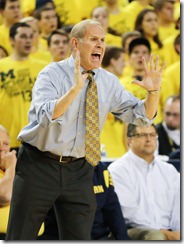 John Beilein spoke with the media over a teleconference this afternoon to preview next week’s Puerto Rico Tip Off. The Wolverines will travel to Puerto Rico early next week after a trip to Iowa State this weekend. (Photo: Dustin Johnston)

TIM SIMMONS:  Coach, the opening question that I have, practice started early this year, September 27th.  Any comments about how this might benefit your team leading into the season?
COACH BEILEIN:  It has been‑‑ the 30 days of practice that we were allowed was good because you could space your practices much better and give kids time off at the same time.  So instead of being more of a four weeks of just incredible compacted schedule trying to get everything in, it gave you six weeks to sort of get things in in a more manageable rate for the young men to understand.

TIM SIMMONS:  Obviously you’ve played a couple exhibition games, a couple regular season games.  How is the team progressing so far?
COACH BEILEIN:  I think we’re moving in the right direction.  We only have one senior.  We only have one junior.  Most of our‑‑ the majority of our team has one year or no‑‑ this is their first year of game experience.  So I do like the way they have‑‑ they’re making progress.  But now things like this, we still have a game at Iowa State on Sunday, and then this tournament will really assist us in growing very quickly early in the season.

TIM SIMMONS:  Obviously you’ve got two players that are ranked among the nation’s best in McGary and Robinson.  I guess one is not playing yet and the other one is playing pretty good.
COACH BEILEIN:  Well, we’re waiting for McGary’s return.  Still do not know when it’s going to be, when it will happen.  It will probably happen very quickly, and we are just waiting to make sure that everything is right for him to return.  And then Glenn Robinson has taken on a real leadership with this team, and as a result‑‑ and he’s got good fine young men to lead.  We have Jordan Morgan, a senior, and Jon Horford, a junior, but then a bunch of young guys, but they love Glenn and Glenn has provided some great leadership both in his work habits and what he says and does on and off the court.

TIM SIMMONS:  Caris LeVert has been your leading scorer in the first two games, so he’s off to a good start for you.
COACH BEILEIN:  Yeah, this is a young man that we saw some great potential from him last year.  We wanted to do everything we could to save‑‑ he’s got an August birthday, which means he actually came to summer school at 17 years old last year, so now he is a full 19 years old, but he is in his sophomore year.  Last year we wanted to burn‑‑ we did not want to burn the red shirt and save this and let it be his freshman year, but he was playing so well in practice, we had to make a call on it.  I don’t think we get to the championship game without him in our lineup last year.  So it was the right call in the long run, and now all the experience he gained last year seems to be paying off this year.

TIM SIMMONS:  In each one of your games Horford has been your leading rebounder, so he’s kind of filling a good void for you in the middle.
COACH BEILEIN:  He has done an excellent job of playing bigger, whether he’s in tight spaces or small spaces, and really rebounding the ball.  He’s got great hands.  If we’re rebounding, outletting the ball well, running the floor, so he continues to make progress every year that he’s been here.

TIM SIMMONS:  You’re kind of used to the formats of these tournaments.  I think you played in the very first one that ESPN did down in Orlando, the Old Spice Classic.  Your thoughts on the tournament format and then also some comments about Long Beach State, your first‑round opponent.
COACH BEILEIN:  Well, the whole idea of these tournaments is a great concept, and you’re really getting ready for what your season is going to be like.  What I like about these tournaments is that when we have teams like you have in this tournament, there’s no easy games at all.  I mean, you’re going to have to really come to play every night, and it’s really important that you look at this as a situation, this is a season within a season as far as what you can establish for your league, for your own personal résumé, for your team.  These games will count‑‑ because they’re neutral sites, these games will be important to making the NCAA Tournament, seeding in the NCAA Tournament, because of the quality of the competition.
It’s time to play.  When we’re done with this tournament, it will be four games in eight days, and that helps the team a great deal.

TIM SIMMONS:  Any thoughts on Long Beach State?
COACH BEILEIN:  All I know is that Coach Monson has had great teams for years, whether he was at Minnesota, Gonzaga, last year an NCAA Tournament team again, but have not‑‑ concentrating on Iowa State right now so haven’t seen a whole lot of Long Beach State.  I know we’ll have to play well to win.

Q.  Before you got on the conversation was about the exempt status of a fourth game in the tournament.  Do you consider using that option and scheduling one of the teams for an additional game?
COACH BEILEIN:  We looked at some of the options that we had, and we just decided against it.  It was going to be‑‑ the schedule was going to be so compressed, and this is so early in the schedule, we felt we would be fine missing that one game.  I don’t think with a young team you want to‑‑ this was going to give us plenty of games, and we preferred practice time as opposed to this if we could.
It would have been an easier decision maybe if one of the teams had been real close or there was other options available, but right now a three‑game tournament is best for us right now.

Q.  What do you learn from these tournaments?  Last year with the preseason NIT and then the previous year against Duke in Maui, what do you get from these things in really trying to gauge what your team is going to be?
COACH BEILEIN:  I think over those three days you’ll get a real indication, a benchmark of where you are right now.  I think it will tell you a lot about your team’s toughness, your resiliency, your talent level.  A lot of things come out in these.  I still remember going to Maui two years ago, and we barely beat Western Illinois before we went out there, and I was thinking this is going to be a long year because we have a freshman point guard, Trey Burke, and there’s a lot of things that he’s learning, and by the time we came back from Maui, we realized we had one of the youngest yet toughest point guards in the country.  You find out a lot during this time, and I expect Puerto Rico to be no different.

Q.  How different is this team since you lost so many players?
COACH BEILEIN:  Well, I hope we’re similar in some ways.  I hope that we still are going to buy into team basketball and play at a good pace, value the basketball, but at the same time we haven’t had a first‑round draft choice at Michigan in 11 or 12 years, 13 or 14 years maybe, and we have two in one year.  We’ve lost a lot of talent.  At the same time I love the young guys that have come in that are trying to replace some of that.  But we’re different, but one thing that won’t be different, we’ll be working very hard to get better every day.

DAN SHOEMAKER:  I know we had you in Orlando to kick off the tournament down there, really appreciated it.  The great news for Puerto Rico is that you don’t have to ride Tower of Terror right before the first game.
COACH BEILEIN:  (Laughing) I know everybody is looking forward to it, and of course us people up in Michigan here, we’re ready to settle in for the winter, so a little break to the Caribbean is always a good thing for us.  But we appreciate you allowing us to be a part of this.  We’re going to try to represent college basketball, the University of Michigan, the Big 10 in a very positive way.

Q.  Coach, you may have no response to this, and if so it’s totally fine.  I’m just wondering by chance, did you have a chance to look at Josh Smith very much in his days at UCLA or maybe even as a recruit, or are these two games with Georgetown enough to form an opinion about kind of the upside and the downside if you see one or what his potential is?
COACH BEILEIN:  I wasn’t involved in the recruiting process at all.  When we played them in Maui, I believe we played them when he was at UCLA, and I know UCLA at that time was having some internal problems, it seemed, at least were reported on the team.  So I don’t think I’m a good one to judge anything with that.  But I do remember that he was a very talented player and frankly didn’t even know he was at Georgetown right now.  Best of luck to him, and I hope it really works out for him.

TIM SIMMONS:  Any final thoughts going into Iowa State?
COACH BEILEIN:  We won’t be going to the ocean there.  Sunday afternoon on ESPN, it’s going to be another great way to benchmark our season because this team has great talent, great coach, and we’re going to have to play our best and then rest for a day and head for Puerto Rico.