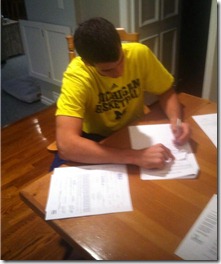 Michigan commit Austin Hatch has been out of the limelight recovering since a tragic plane crash that took the life of his father and stepmother in June of 2011. Hatch, who committed to play basketball for Michigan shortly before the crash, signed his letter of intent to play basketball at Michigan this week and will finish his high school basketball career in California playing for for Loyola High School in Los Angeles.

Hatch opted to move from Fort Wayne to California in order to live with his uncle, Michael Hatch, for his final year of high school. According to Michigan head coach John Beilein, Hatch could be ready to return to the court this season after missing the 2011-12 and 2012-13 high school seasons.

“Yes,” Beilein responded when asked if Hatch would play this season. “Obviously that’s up to his high school and his coach and things like that, but that is the plan right now.”

Hatch previously reclassified from the 2013 class to the class of 2014 in order to afford himself more time to recover from the severe injuries he sustained from the plane crash. He was among the 2014 recruits who signed their national letters of intent on Thursday, along with Ricky Doyle, Kameron Chatman and DJ Wilson.

On Friday, Beilein talked about the class and specifically addressed the situation with Hatch. Because of the seriousness of Hatch’s injuries, his ability to play basketball at the college level remains in doubt. But Beilein said Hatch’s scholarship is not at stake.

It remains to be seen whether or not Hatch will be able to play basketball at the college level, but the news that Hatch will be playing high school basketball again is welcome and uplifting. Hatch has been working out with Rasheed Hazzard, who previously worked with Lakers players to recover from injuries. The 6-foot-6 wing hasn’t play an official organized game of basketball since the plane accident in June of 2011.

Beilein said he and assistant coach Jeff Meyer have remained in strong contact with Hatch throughout his recovery, especially after the contact rules became more allowing last June.

“Jeff Meyer and myself, both of us have stayed in great touch with Austin over this time period,” Beilein said. “You know what? He gives to us. He makes us appreciate what we have a whole lot more because this young man is just terrific to talk to, to speak with. It puts our lives in perspective sometimes.”

Hatch will hold a press conference on Wednesday afternoon (6 p.m. eastern) in Pasadena to discuss his recovery, transition to Loyola and plans to play basketball at the University of Michigan. These will be his first public comments to the media since the accident.