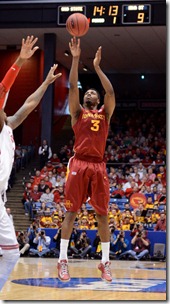 After a pair of mindless exhibitions and two cupcake victories, Michigan is ready for its first test of the season. Five of Michigan’s next six games will be away from the friendly confines of the Crisler Center and at least one, probably two, games will be against top-25 opponents. First up is a trip to Ames, Iowa to face the Iowa State Cyclones.

Last year Iowa State finished fourth in the Big 12 with the best offense and the seventh best defense in the conference. The Cyclones split with Kansas State and Oklahoma State and lost to Kansas in overtime twice before bowing out in the second round of the NCAA tournament to Ohio State. This year’s Iowa State squad returns just two starters from that group: Melvin Ejim and Georges Niang. The versatile pair of forwards are not just the only returning starters, they are the Cyclones to play major rotational minutes on last year’s team. Head coach Fred Hoiberg still has plenty of talent at his disposal with a talented a group that should be able to compete in the upper-third of the Big 12.

Ejim has been sidelined with a knee injury, but it hasn’t mattered yet. Iowa State played two games about as challenging as Michigan’s early season tune ups, hosting UNC Wilmington and Texas A&M Corpus Christi, and outscored its opponents 175 to 112 in 133 possessions of basketball. That’s an extremely impressive 1.32 points per trip offensively and .84 points per trip allowed. Iowa State opened the season ranked 39th by Ken Pomeroy’s projections and has moved up to 34th after outperforming expectations.

Given the size on the roster (Iowa State’s tallest starter is 6-foot-7) it should be no surprise that the Cyclones are decidedly perimeter oriented. That recipe for success has worked out very well, the ISU offense was the 6th most efficient in the country last season, trailing only Michigan, Gonzaga, Indiana, Louisville and Duke. There are new faces on the roster but the Cyclones still shoot the ball very well – 46% from three so far this year with a 63.8% effective field goal percentage – and attempt a lot of shots from beyond the arc. In two blowout victories, the Cyclones attempted 49% of their field goals from three-point range. As with most perimeter oriented teams, Iowa State doesn’t turn the ball over much but doesn’t crash the offensive glass or get to the free throw line very often.

The Cyclones are an offense-first program. They don’t pack a strong defensive punch and don’t have a lot of size to defend around the basket (although UNC-Wilmington and Texas A&M CC both had an awful time scoring inside). Iowa State has played well defensively early on, but faced a UNC-Wilmington team that scored .54 points per trip against Iowa. Iowa State’s early season performances probably tell us about as much as Michigan’s – some guys look good but haven’t really been tested. The Iowa State defense gave up 1.05 points per trip in Big 12 games last season (with three seniors in the lineup) and Michigan should have the firepower to score the ball effectively. Look for the Wolverines to play a clean game as Iowa State ranked 249th or worse in forced turnover rate in the last three seasons.

Despite the lack of an early season test, Iowa State has been playing without its best returning player, Melvin Ejim. Ejim has been sidelined with a knee injury and his timeframe to return has been moved up and there’s at least a (small) chance that he could play Sunday but it remains unlikely.

“You can say that Sunday isn’t ridiculous or no hope whatsoever, but it’s not like it’s a strong possibility,” [Iowa State trainer Vic Miller] said, according to the paper. “We’ll have to see how he progresses, see how he feels after the workouts and after we get his volume up higher with dry land stuff.”

Sources told CBSSports.com that Ejim’s status is up in the air. The Cyclones will evaluate him between now and Sunday.

Ejim is a 6-foot-8 jack-of-all-trades forward. He rebounds like a big (he was the top defensive rebounder in the Big 12 last year) and he’s an effective scorer. He shot 55% inside the arc and 35% outside the arc last season and got to the line often.

Georges Niang was named to the Big 12 All-Freshman team last season, averaging 12 points and five rebounds per game, and has been Iowa State’s go-to player in the early season. He’s using just over a third of Iowa State’s offensive possessions and despite being the tallest ISU starter at 6-foot-7, he actually isn’t the best rebounder but leads the team with a 35% assist rate. Niang was McGary’s former NEPSAC prep school rival as their Tilton and Brewster teams played a handful of high profile games. He can do a bit of everything including shooting the ball inside (57% last year) and out (39% last year).

Iowa State is often coined “Transfer U” because of its reliance on transfer players under Fred Hoiberg. DeAndre Kane is no exception. Kane is a fifth-year graduate transfer from Marshall that stepped right into the starting point guard role. Kane is listed at 6-foot-4, 200 pounds and is actually Iowa State’s leading rebounder through two games, grabbing nine per contest. He was a career 15 point per game scorer at Marshall but failed to post an offensive rating over 100 in any of his three seasons. He’s not a great shooter – 48% on twos, 25% on threes last season – but has posted strong assist and free throw rate numbers early on this season.

Michigan fans should remember Kane’s backup, Monte Morris. He was Mr. Basketball in Michigan last season, narrowly edging out Wolverine point guard Derrick Walton, and he was very close to committing to Michigan in June of 2011. Morris is coming off the bench, but averaging 26 minutes per game and playing effectively but struggling to finish inside the arc (1-5 2-point shooting).

Naz Long is a Canadian wing guard from the same hometown as Nik Stauskas. He starts on the wing and hit eight threes in Iowa State’s season opener but has earned slightly less playing time than Morris despite his spot in the starting lineup. Long is also praised as one of Iowa State’s better perimeter defenders.

Top-75 ranked incoming freshman Matt Thomas starts on the other wing, leads Iowa State in minutes and loves the long range shot. The 6-foot-3, 200 pound guard is 5-of-13 on triples and just 4-of-5 on twos early on.

Dustin Hogue and Daniel Edozie provide front court minutes but neither player is a true big man. Hogue is a 6-foot-6 slasher and Edozie is a 6-foot-8 junior college transfer.  Hogue started the first two games of the season and is averaging 11.5 points and 8.5 rebounds per contest. Michigan locals will remember 6-foot-9 big man Percy Gibson. The Detroit native will play some minutes off the bench but his effectiveness has declined over his career.

Michigan, especially without Mitch McGary, is a very similar team to Iowa State. The Cyclones like to shoot the three, are fairly undersized, not great rebounders and pass the ball well. Iowa State likes to play fast – 69 possessions per game this year and last compared to Michigan’s 65 – and recently Michigan has been a better team in faster games. Trey Burke is gone but the Wolverines still should be a strong transition team as Stauskas, LeVert, Robinson and Walton have all looked more than comfortable in an uptempo game.

A healthy Mitch McGary could completely change this game because of Iowa State’s undersized front line. Horford and Morgan have some size advantages but probably don’t pack the offensive punch to make a difference. This is a game where Glenn Robinson III will have to play almost exclusively at the four because of Iowa State’s small lineup. Horford has been a dominating rebounding presence and this feels like a more challenging but passable rebounding test for him in that regard. The ability of Horford and Morgan to match-up against Iowa State’s smaller lineups will also be tested.

This is the start of many high pressure games for Derrick Walton. He’ll be battling a bigger and stronger fifth year senior (DeAndre Kane is 24 years old, Walton turned 18 in April) or a point guard that he’s played with or against for years. Those are both high stakes match-ups and Michigan needs him to hold his own by valuing the basketball, not forcing shots and playing good defense. As long as Walton stay under control, this is a game for Michigan’s wings to win. Caris LeVert, Nik Stauskas and Glenn Robinson III against Long, Thomas and Hogue is where Michigan has the advantage, especially if LeVert is the player he’s appeared to be this season. Michigan’s wings are bigger, more seasoned players and they need to take advantage.

The first road game is always a struggle and the energy-level at Hilton Coliseum will be high. Michigan is the highest profile non-conference opponent that the Cyclones will host this season and Iowa State lost just one game at home last year (to Kansas in overtime). Remember that Michigan struggled against a mediocre Bradley team in its first road game last season before eventually pulling away – and that was a team that ran the table in non-conference play.

Ken Pomeroy’s projections like Iowa State, barely, projecting a 70-69 Cyclone victory and giving the Wolverines a 46% chance of an upset. Iowa State has enough talent to beat Michigan but not enough that the Wolverines can’t escape with a key road win, even without McGary.