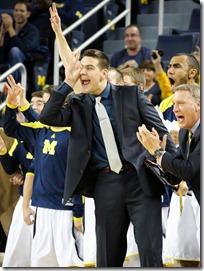 John Beilein did not say Mitch McGary would play in Michigan’s game against Iowa State on Sunday, but he didn’t rule it out, either.

“Mitch will play when he’s ready to play,” Beilein answered when asked if McGary will play against the Cyclones. “We’ll just keep that going in that direction. When he’s ready, he’s ready.”

This is a bit of a different tune than what we’ve heard before games previously, when Beilein has flatly confirmed McGary will not play. For now, McGary’s status remains up in the air.

“He’s made progress and he continues to do so. But he’s been out a long time,” Beilein said. “If he dresses, he’ll play. But we’ll decide is he’s going to dress when he’s ready. So if you ever see him in warm-ups, he’s going to play.”

McGary averaged 7.5 points and 6.3 rebounds per game last season but put up 14.3 points and 10.7 rebounds per game in the NCAA tournament, leading Michigan to the National Championship game. McGary was selected to the Associated Press Preseason All-American team earlier this month.

McGary’s size would be a big advantage for the Wolverines against an Iowa State team that is decidedly underszied. The tallest Cyclones starter is 6-foot-7 Georges Niang and Melvin Ejim, Iowa State’s top rebounder at 6-foot-6, has been sidelined throughout the preseason with a knee injury. (Photo: Dustin Johnston)