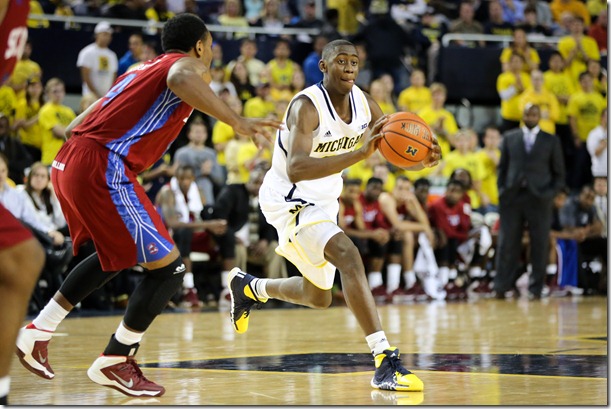 Before Michigan’s first true road test last season, the Wolverines had a few solid victories in Madison Square Garden over Thanksgiving and a blowout win over a ranked NC State team under their belt. Against Bradley in Peoria, Illinois, Michigan still had to win ugly, 74-66.

This year, Michigan’s first road test of the season comes much sooner and against a much better opponent. Iowa State went to the NCAA tournament last season and advanced to the round of 32 before narrowly falling to Ohio State. The Cyclones lost three starters to graduation but are still expected to compete near the top of the Big 12.

At a press conference on Friday, Beilein said his message to his young team is simple: embrace the opportunity.

“We’re still a young team that has to look at this, embrace it, and try to get the ‘W,'” Beilein said. “It’s not going to be easy, but we’re going to be prepared as best we can. I think we’ve always been a pretty good road team. But when it starts over again, and you go to those first road environments, it’s hard to do. We have to breathe it in and just jump right in and do our best.”

Michigan isn’t quite as inexperienced as it was last season, when it had two freshmen starting and one other playing significant minutes at the beginning of the season. This year, the team is led by sophomores and a veteran frontcourt. Any team’s first road game is a new experience and this team is still young. Early Ken Pomeroy statistics rank Michigan 330th in experience. That makes the Wolverines the youngest team in the Big Ten and seventh youngest major-conference team in the country.

To prepare for what is sure to be a sold-out crowd in at the Hilton Coliseum, Beilein and his team will be practicing with the speakers booming.

“I think the big thing is getting used to everyone not yelling for you and yelling against you and sort of getting used to that,” Beilein said. “We will have two sessions here where I might go home with my ears ringing when they’re all done, but we have to get to that point where we’re ready to play in that atmosphere.”

Michigan may see a bit of itself in the Cyclones and the way they produce offense. Iowa State boasted an efficient offense last season and loves the three ball, attempting 49 percent of its shots from beyond the arc in two victories so far this season. Michigan’s percentage of shots taken from behind the 3-point line is a bit lower at 40 percent, but still up there.

Against such a perimeter-oriented team, Beilein said one of the main focuses for the Wolverines defensively will obviously be stopping the long-range shot. He also alluded to the fact that Iowa State’s style will probably be similar to what Michigan faced two years ago when the two teams met at the Crisler Center.

“They have incredible shooting everywhere — the kid (sophomore) Naz Long didn’t even play last year, he comes in and hits eight threes,” Beilein said. “That’ll be important. When they were here two years ago, they did not shoot the ball from three well, and they were a tremendous 3-point shooting team. Probably one of the reasons we got away with that W. Similar style. It’ll be different plays, but probably similar style in many ways.”

One aspect of Iowa State’s “style of play” remains up in the air; like Michigan, the Cyclones could be without their starting forward. Iowa State senior Melvin Ejim is doubtful to play in Sunday’s game, which is a big blow for the Cyclones down low. Last season, Ejim was an elite rebounder, boasting an offensive rebounding rate of 13.2 percent and a defensive rate of 24.6 percent – ridiculous numbers for a 6-foot-6 player.

Without Ejim, Michigan should be able to take advantage of Iowa State’s lack of size in the post. Beilein is familiar with Ejim’s rebounding ability.

“He’s a warrior. I got to see him this summer a little bit and he is an absolute rebounding warrior. That makes a big difference,” Beilein said. “Ejim is probably as good as anybody they have coming back from last year. So we’ll see whether he can play or not.”

Ultimately, this road test is a crucial benchmark for Michigan. Win or lose, the Wolverines will learn a lot about themselves and the coaches will have a better idea of what their team does well and what it needs to work on moving forward.

“I like where we are right now, and we’ll find out a lot more,” Beilein said. “Usually you find out a lot in those first tournaments and those first road games you play. It doesn’t dictate where your season will go, it just tells you where you are now and what you have to do from there. You could have great great wins early in the season that mean nothing, or you could have a tough loss that turn into a catalyst for great wins.”