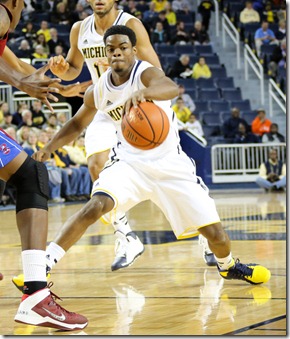 Michigan’s matchup against Iowa State on Sunday means a lot: it’s the first road test for the young Wolverines and their first game against a team that has a realistic shot at beating them.

The two freshmen grew up playing against each other in Michigan — Walton at Chandler Park, Morris in Flint — and they even played on the same Michigan Mustangs AAU team the summer before their senior year.

Damon Allison was their coach for the Mustangs, and he is making the trip to Ames to watch his two star pupils go against each other. We caught up with Allison on Saturday, and he talked about the players’ relationship that summer in 2012.

“Their relationship was really good,” Allison said. “They had great chemistry, where they mixed and matched well and the thing was, the camaraderie between the both of them — they were both competitors and they wanted to win. They did a lot of sacrificing for the team. Both of them did what they were able to do best. Derrick pretty much ran plays and tried to make things happen that way, and Monte made plays and scored when he needed to.”

Walton has always been more of a pure pass-first point guard, while Morris is a talented scorer who can also make plays for his teammates. Together, they made for an imposing perimeter duo on the AAU circuit.

“Whoever had the ball at the time, they would push the point and be the point guard,” Allison said. “But when it was a screen and roll situation, we tried to make sure Derrick was set up in the screen and roll situation because he was pretty good at screen and roll. When it was time to come off a screen or a double screen to score, then Monte was that guy. They would always be on the same side as each other, so if Derrick was screened and went to the basket, then he would always have an outlet for Monte or vice versa because both of them were outside shooters as well.”

Back on different teams during their respective senior years of high school, Walton and Morris waged a much-hyped season-long battle for Michigan’s Mr. Basketball. In the end, Morris pulled it out and Walton finished second in voting (although he actually secured more first-place votes).

When Walton was asked if losing Mr. Basketball adds anything to the competition between the two players on Sunday, he flatly denied it.

“Not at all,” Walton said. “The main goal for us as a unit is to go and get a win, and that’s the only thing we’re focused on.”

That being said, Walton did add that he was looking forward to the matchup with Morris.

Morris is excited for the match-up as well. In the summer of 2011, Morris was almost a Wolverine when he was offered on June 15th, but Derrick Walton took the offer first. Morris is happy with where he ended up at Iowa State and doesn’t feel the need to prove anything.

“I’m here at Iowa State for a reason,” Morris told MLive. “From me just winning Mr. Basketball, it may have let them know that they might have missed one but I don’t feel like I have anything to prove to Michigan. They recruited me high and offered me, so they know I can play. I’m just going to go out and play Man-Man basketball and hopefully we get the win and I can play solid.”

Even though he’s been coming off the bench, Morris has played solid minutes for the Cyclones. In two games, the freshman is averaging 10 points, five rebounds and three assists. He has been made to feel at home with two Iowa State players from Michigan — former Wolverine recruit Sherron Dorsey-Walker and Percy Gibson — as well as assistant coach and Detroit native Cornell Mann.

Walton has stepped in as the starting point guard for Michigan and has been impressive as he feels his way through his first few college games. Allison said he talks with Walton often.

“Derrick is handling it inch by inch,” Allison said of Walton’s transition to the college game. “I think that he said, when I talked to him maybe two weeks ago, he said that he’s just adjusting. There are some things that he still has to learn. He understand that he doesn’t know it all, and I think he’s trying to do everything coach Beilein asks him to do. He’s trying to make the right decision on every play — the right pass, the right shot, in every situation. I think he’s really taking pride in his defense right now. If you watched in every game, he’s almost had a steal at half court [every game] because he’s working so hard on defense.”

With the success both players are experiencing so far in college, Allison isn’t torn at all when it comes to his rooting interest when he attends the game on Sunday.

“I am a proud coach,” Allison said. “I text both of those guys. I told them I’m coming down and I said I’m a proud coach and I want to see you guys compete and compete hard to win. Whoever wins, who cares. I don’t care who wins, I just want to see both guys continue on with their career and have fun and take it all in. I tell you what man, I’m a proud coach”