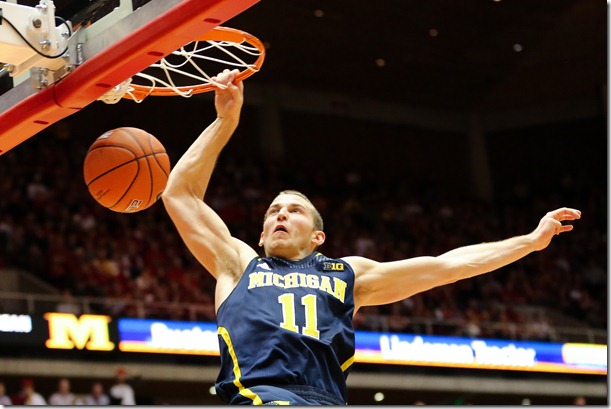 Last year’s Michigan team went two months before losing a game. This year’s group made it to its third game. The Wolverines didn’t play poorly at Iowa State but they didn’t play well enough to win on the road, falling to the Cyclones 77-70.

The 2013-14 Wolverines are still forging their identity. Replacing the National Player of the Year isn’t easy and doing it with a freshman point guard is even more difficult. Michigan doesn’t know who its go-to player is or who it should be and its All-American center practiced just once before playing his first game Sunday night. Playing in front of 14,384 fans, that uncertainty caught up to Michigan.

The Wolverines led by as many as nine points in the first half and controlled the game until the final seven minutes. Sophomore guard Nik Stauksas was comfortable leading the offense, scoring 20 points and handing out six assists. Mitch McGary played 22 minutes and made an impact, but he was out-dueled by Iowa State’s Melvin Ejim. Ejim, who returned two weeks early from a hyper-extended knee, tallied a game-high 22 points and nine rebounds.

The Cyclones made more plays down the stretch and Michigan unraveled just a bit in the face of pressure. Iowa State outscored the Wolverines 24-10 with a run that spanned the final 8:48 and started immediately after an emphatic dunk from Nik Stauskas appeared to give Michigan a comfortable six point lead.

Michigan’s offense was held below a point per possession against a non-conference foe for the first time since December 2011 (at 74 possessions this was also the fastest game that Michigan has played since 2011). The Wolverines lost this game because of their offensive execution. Over the last two seasons, Michigan is 45-3 when holding opponents below 1.05 points per trip. This is a program that relies on having an offense that can win consistently with that level of defensive performance.

The Wolverines undoing on the offensive end was the 3-point shot. With 42% of Michigan’s field goal attempts originating from long range, the Wolverines connected on just 8-of-29 attempts (28%). Some were forced late in the game, but Michigan missed a lot of open looks from players that have been fairly consistent. If this team shoots less than 30% on those kind of open looks all season they are going to have some major issues. U-M did shoot 52.5% on 2-point attempts but didn’t get to the line often (13% FTA/FGA) or make a major impact on the offensive glass (29% offensive rebounding rate). The Wolverines scored 14 second chance points on 12 offensive boards but most of that production was in the first half.

The Wolverine defense wasn’t necessarily bad, surrendering 1.04 points per possession, but it deteriorated down the stretch.  Michigan held Iowa State to 3 points on its first eight possessions of the second half and then surrendered 39 points on the final 30 possessions of the game – 1.3 points per trip over the final 17 minutes compared to .86 points trip trip in the first 23 minutes.

The Wolverines controlled the defensive glass, Iowa State rebounded just 21% of its misses for eight second chance points, but struggled to keep the Cyclones out of the lane and protect the rim (56% 2-point shooting, 0 blocks). Michigan’s defense was most effective when it could turn Iowa State over. McGary and Robinson combined for eight steals which led to 11 points off turnovers but the Cyclones only gave the ball away on 16% of their possessions. The big difference statistically was at the free throw line, where Iowa State outscored the Wolverines 13-4 and had 10 more attempts. Iowa State also executed down the stretch. Naz Long and DeAndre Kane both hit some big threes late and Georges Niang was able to switch onto Caris Levert twice down the stretch and post him up for easy points.

Michigan has a lot to fix but at this point that’s encouraging. There was a point in the middle of last December where it was clear that Michigan was playing about as well as it could. Mitch McGary did emerge in the tournament but we always knew about what that team was. This year’s group is going to improve significantly as the season goes on. The Wolverines will have to grow up as they are off to Puerto Rico next week. The environment in Puerto Rico will be friendlier (and warmer) but the importance of getting a few quality wins is magnified with a trip to Duke shortly after.