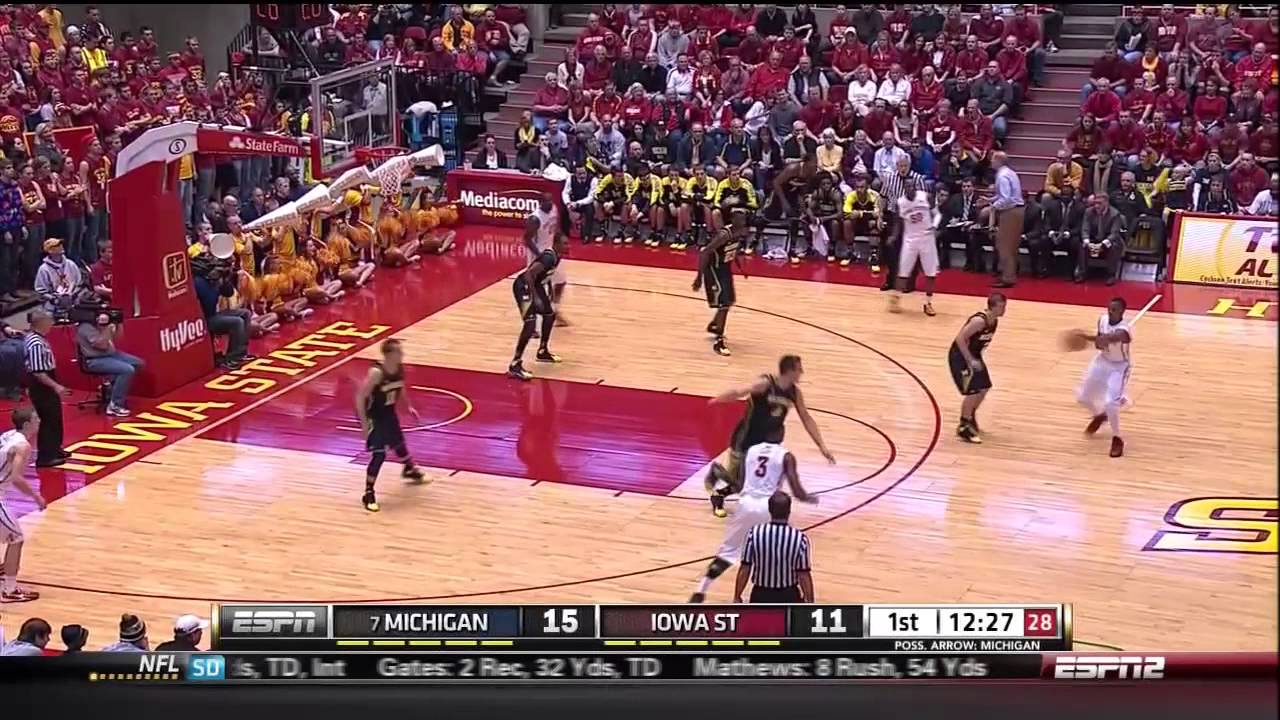 Michigan fans waited until the third game of the season, but Mitch McGary got healthy just in time for the Wolverines’ first true test. At the 16:17 mark in the first half, McGary entered the game for his first action since dominating the NCAA tournament last season — and it seemed, for the most part, as though he hadn’t missed a step. Michigan’s All-American big man was immediately effective, tapping in a missed layup from Stauskas a few minutes after entering the game. On the defensive possession immediately following, McGary jumped the passing lane and picked off a pass from Cyclone freshman Monte Morris, taking it to the hoop with a Rondo-esque flourish. The next two plays are off pick-and-roll action from Stauskas: the first shows McGary getting in excellent position under the basket which allows him to cash the putback after the offensive rebound off Stauskas’s missed three; the second features Stauskas making a great play after McGary slips the screen and Stauskas draws three defenders. The sophomore guard looks over the top of his wall of defenders and finds McGary wide open for a layup. McGary looked good in this game, but not necessarily vastly improved from last year’s Final Four — he ran a lot of the same action and found his points in the same places (offensive rebounds, pick-and-roll, etc.). It’s safe to say the ever-deliberate Beilein will bring along the just-healthy McGary’s development slowly but surely and by conference season we will see a much improved big man from last season.

Notice anything about all of these baskets? That’s right: they are all scored in transition. This follows upon what we have seen from Michigan so far this season, which is a terrific fast-break offense and a so-so half-court offense. When the Wolverines get out and run, off of missed shots or steals or whatever, they are extremely tough to stop because of all their athletic ballhandlers. But when teams make shots, as Iowa State did late in this game, the Wolverines have trouble running their half-court sets. In this run, two things stand out: Michigan’s ability to steal the ball and Mitch McGary’s outlet passing. McGary had four steals in this game, and one of them came when he took advantage of a miscommunication between DeAndre Kane and one of his teammates, stealing the ball on an attempted pass. McGary immediately got the ball to a streaking Glenn Robinson III, who was fouled. McGary then exhibits solid defense on Dustin Hogue, forcing a tough shot and a miss. Upon corralling the rebound, McGary instantly turns upcourt and throws a great pass to Robinson streaking down the right side. This is exactly what Michigan needs its big men to do — be comfortable and accurate when starting the fast break. On the final play of the run, McGary fights three Cyclones for a rebound, recognizes there are only two back, and gets the ball to Caris LeVert, who finds Stauskas open for a corner three. Michigan’s fast-break offense will be lethal again this season — its half-court sets still need improvement.

Nik Stauskas’s improvement athletically since last season has been on display through his defense and rebounding, but this was one of the first times the sophomore has been able to show off his new ups in such, ahem, bold fashion. Stauskas was Michigan’s best player in this game, and one of the reasons he’s been able to take on his expanded role in the offense is because of the work he put in improving his physical abilities. This play was pretty simple. Caris LeVert throws a bad pass to Spike Albrecht and Iowa State, who played aggressive defense all night, converges on the ball with three players. Albrecht controls the ball and finds Stauskas on the perimeter. Stauskas recognizes that the Cyclone defense is completely out of position and drives aggressively to the bucket. Then, he takes off. This play didn’t signify a big turning point in the game, but it certainly illustrated a crucial point at this juncture of the season: Stauskas has consistently been the most aggressive Wolverine driving to the rim.

In a broad sense, Michigan had trouble executing in the half-court late in this game. But they did manage to make a few plays to keep the game within reach, thanks mostly to Nik Stauskas. In this clip, we see Michigan desperate for offense after a 12-1 run by the Cyclones to open up a six-point lead. Michigan is unable to get anything going off the drive-and-kick from Caris LeVert to Glenn Robinson III, and Stauskas takes matters into his own hands, pulling up for a 3-pointer off the dribble and nailing it. On the next play, Stauskas finds a cutting Robinson for a layup. Those we a couple of nice plays that kept Michigan in the game. But for the majority of the last quarter of the game, Michigan’s offense didn’t look as good. The first miss by Robinson from beyond the arc wasn’t necessarily his fault — Stauskas’ pass needs to be in a place that allows Robinson to catch and shoot in rhythm. But the next play in the sequence was absolutely killer for Michigan, as both Robinson and LeVert missed open shots from the 3-point line with a chance to make it a one-possession game.

5) Georges Niang takes over to close out the game

Michigan experienced some serious matchup issues late in this one, mostly thanks to one Georges Niang. Niang is 6-foot-7, 240 pounds and can play either on the perimeter or inside. For the first two plays in this sequence, Caris LeVert guarded Niang and at 6-foot-6, 185, LeVert simply couldn’t handle the big man physically. After going for the ball on the first play, Mitch McGary is left to help on the drive and Niang makes the smart play, drawing contact and getting the and-1. On the second play, McGary is less subtle after LeVert makes a somewhat feeble attempt to front Niang in the post. At this point, Iowa State realizes it has a distinct matchup advantage and finally runs action to get LeVert back on Niang after Michigan switches his and Nik Stauskas’ assignments. Michigan switches, as they normally do and as most teams normally do late in games, on the screen set by Niang for DeAndre Kane. This leaves LeVert on Niang as the big man posts him up yet again. This time, Niang simply backs down LeVert until he’s on the block and gets the easy lay-in. The physical mismatch was simply too much for LeVert late in this game. Could Michigan have handled the matchup better? It’s tough to say. The Wolverines could have gone with two bigs, but who — Jordan Morgan, Jon Horford or Max Bielfeldt — was going to guard Niang on the perimeter? And would Michigan rather have LeVert on Melvin Ejim or Dustin Hogue? I don’t think so. This was a case of a severe mismatch, and the Cyclones took advantage.