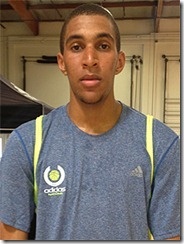 The 6-foot-9 combo forward’s father, Bruce, had previously visited Ann Arbor to meet with the Wolverine coaching staff. Bolden has not taken any official visits because he has yet to take his standardized tests.

The Wolverines have class of 2014 commitments from Kameron Chatman, DJ Wilson, Ricky Doyle and Austin Hatch. Both Chatman and Wilson have the potential to play the three and four spots in Michigan’s offense where Bolden would have likely fit.

With Bolden eliminating Michigan and Dante Exum “strongly leaning toward the NBA Draft”, the Wolverines’ class of 2014 recruiting board is fairly empty beyond any potential late bloomers. The Wolverines are expected to put their focus on the class of 2015 where Jalen Brunson, Jalen Coleman and Luke Kennard currently hold offers.