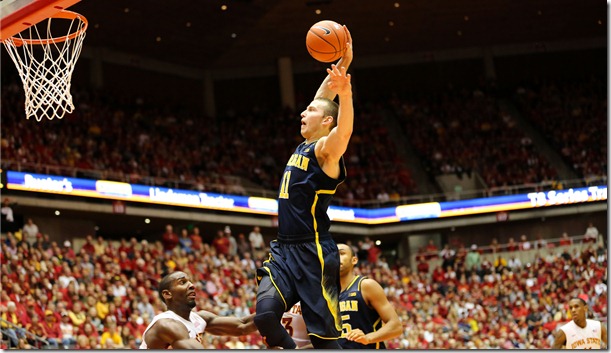 Michigan’s search for a go-to scorer in tight games will continue for most of the non-conference season as it adjusts to life without Trey Burke, the best go-to scorer in college basketball last season. The Wolverines have a lot of options, all of them talented but none of them proven. John Beilein will stick to his tinkering and experimenting until one player, or a few, emerge as capable and comfortable in the role.

But at this early point in the season, sophomore Nik Stauskas is that guy.

He wasn’t the most hyped entering the 2013-14 season — that title belongs to Michigan’s two draft-spurners, Mitch McGary and Glenn Robinson III; nor did he command the “most improved” headlines that Caris LeVert snatched up; but Stauskas has quietly stepped into the role of Michigan’s most consistent, comfortable and in-control offensive option.

Michigan lost its game against Iowa State on Sunday night in Ames, 77-70, but it wasn’t for any lack of effort from Stauskas. The sophomore Canuck racked up 20 points on 8-for-18 shooting from the field to go along with four rebounds and six assists.

But more than his numbers, what stood out about Stauskas’s performance was the fact that it was him — not Robinson, not McGary, not LeVert — who was running the show at the end of the game. Beilein predictably downplayed calling Stauskas’s number in the second half. That was only because Stauskas had the hot hand, he said.

“In this game in particular, yeah, (Stauskas was having plays called for him at the end),” Beilein said during his press conference following the loss. “Mitch had just one full practice under his belt … and Glenn was not having his best day, he’ll have better days ahead of him. So Nik had the hot hand, and it made sense. We’d do the same thing if Glenn had the hot hand or Mitch or Spike or Caris or anybody else.”

It’s true that Stauskas had the hot hand. He scored 13 of his 20 in the second half and found not only his own offense but offense for others; in one two-play stretch he pulled up for a long 3-pointer and nailed it, then followed that up with a great pass to Robinson cutting to the basket for an easy layup.

But it wasn’t just that Stauskas looked so good — his teammates simply didn’t look ready to join him in stepping up. Beilein going to Stauskas at the end was just as much about how well Stauskas played as it was about how rough the night went for Robinson and LeVert, Michigan’s other two top perimeter scorers. Robinson scored 12 points on 4-for-14 shooting, while LeVert was even less effective with five points on 2-for-9 shooting.

This isn’t to dump on those guys — LeVert and Robinson are both talented enough to find their offense in future games, and pretty much everyone other than Stauskas struggled from the 3-point line (Michigan players other than Stauskas shot 4-of-19 from beyond the arc). This also isn’t to say Stauskas was perfect: a missed front end of a one-and-one opportunity in the second half was killer.

All of that aside, it was evident watching Sunday’s game — especially as the minutes ticked down and Michigan’s grasp on a comeback opportunity was looking more and more tenuous — that Stauskas was the player most comfortable with the ball in his hands.

This shouldn’t come as a total surprise. Stauskas was Michigan’s most efficient player in the pick-and-roll last season, even surpassing Trey Burke. The experience he had running that set from the position of primary ballhandler gives him a leg up on Robinson at this early point in the season. Stauskas is also already used to playing heavy minutes against top-notch competition thanks to his experience last season, something LeVert is clearly still getting used to.

Stauskas is leading the Wolverines in most statistical categories early on as well. He leads Michigan in scoring (17 points per game), assists (4 per game), offensive efficiency (136.4 offensive rating), three-point shooting (52.6%) and overall shooting (66.7 eFG%).

Michigan learned a lot from this game, and near the top of its list of lessons learned is that Stauskas is its go-to-offensive weapon right now. Other players will surely emerge as the year goes on — Michigan’s backcourt is simply too talented for other players not to step up and compete for that role.

For his part, Stauskas was deflective after the game when asked about his prominent role in running the offense with the departure of Burke and Tim Hardaway Jr.

“Obviously we have a new team this year and last year we were really reliant on Trey and Tim to step up in those opportunities,” Stauskas said. “I think we’re perfectly fine with guys stepping up. We’ve got a lot of guys who are capable of doing that. I don’t think we’re too worried about that.”

Throughout the offseason, one of the biggest questions surrounding Michigan was who would step up as “the man” in the Wolverines’ offense, the guy who would be willing and able to take the big shots in big games.

Right now, Stauskas is that man.