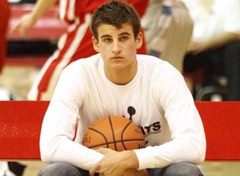 Kreiger and his coaches thought the best time for Hatch’s return would be at home against Bishop Luers in early February.

They sat down with Hatch to talk to him about the plans to put him back on the court.

“As soon as he realized what was going on, he spoke up and said, ‘I appreciate what everybody’s doing, but I’m not ready to play,’” Kreiger said. “We were dumbfounded. Here it is, his goal since he came out of the coma to get back on the court, and he’s the one who says, ‘I’m not ready.’”

Then Kreiger listened to Hatch’s reasoning.

The coach was reminded what a unique young man sat in front of him.