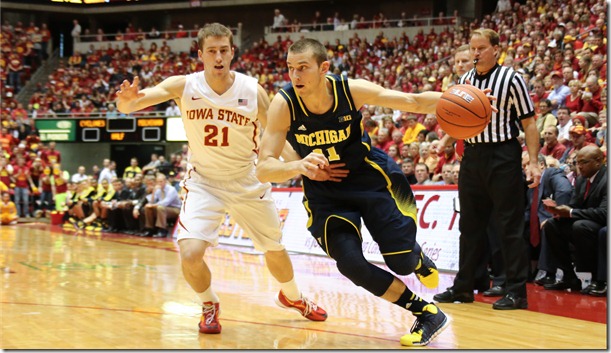 Michigan lost to Iowa State on Monday, but the final score is far from the final word on what that game meant for the Wolverines.

For Michigan’s exceedingly young lineup, it was the first road test of the season against a very good, experienced team. It was an opportunity to snag a solid road win early in the season, but it was also an opportunity for Michigan’s freshman to learn and for its sophomores, who are also still learning, to lead.

Beilein, who no one would ever accuse of being okay with losing, said he still saw the aftermath game as a great opportunity for his team.

“All the coaches agree this was a tremendous opportunity to learn and improve based on the game, based on what we learned in the game and what we learned after the game,” Beilein said. “I can’t wait for today’s film session, which starts in a half an hour. We’ll teach this young team and teach the veterans as well, of the things that are important to winning. And the coaches as well. We learned a lot about this team, we learned about what we can do better, and how we grow from it.”

The process of growth means both looking forward at what how Michigan can implement lessons learned from this game and looking back, at what the Wolverines could have done better.

Beilein said that he would have gone about a few strategic decisions differently in retrospect. One of those was his decision to play Caris LeVert for 37 minutes despite his lack of production, as it probably left the sophomore gassed at the end of the game, when he wasn’t able to make some key defensive stops.

“In retrospect, you look at his production and it probably doesn’t warrant 37 minutes, but we just thought, he’s going to make his next shot, he’s going to make the next defensive play, and it didn’t always happen,” Beilein said. “So I probably would have played Zak Irvin a little bit more in that second half to do something with it. Just given the timeouts in the second half I thought he could go, he’s got a high motor, he’s an energizer bunny, he can go all day. You’re going to see this very rarely, where they take their point guard and post you up. They were doing it over and over again, and that does wear on your physical conditioning, battling in the post and then guarding on the perimeter.”

Beilein also addressed the tough matchup situation near the end of the game with Iowa State forward Georges Niang. Niang, at 6-foot-7, 240 pounds, was matched up with LeVert on a few possessions late in the contest and took advantage of his edge in size.

“We did a lot of things. There was one time we tried to go under a screen so we didn’t have to switch, keep Glenn on him, but we blew that one and they hit a three,” Beilein said. “We had one where Caris got switched onto him one time in some type of ball screen and he drove him down but we could have gotten some exterior help on that one too. But he’s a nightmare. He’s not just a rebounder, he can pass it, he can shoot it from three, he’s really cagey with the ball, he’s an outstanding player, he gave us fits. Caris got matched up with him three times, and none of them worked out well. Sometimes it’s hard to avoid that because you’re in a quick man rotation, but we probably could have given him more support.”

While there were a few things Beilein said he would have done differently, the game essentially turned on the last few minutes of the second half — it was anyone’s game. The coach said he saw some positives from a few of his players that they can build on going forward.

One of those players was Nik Stauskas, who looked like Michigan’s go-to scorer in the waning minutes of the loss.

“Forget about Nik’s 20 points. Nik was physical, he guarded his man, he was on scouting report, he rebounded, pushing the ball better. I really like what we saw from him in that game,” Beilein said. “Spike coming off the bench just making shots, making plays, no turnovers, he’s going to be a tremendous help to us off the bench, and obviously a tremendous help for Derrick as well. And then obviously what Mitch can do at different times to impact the game, whether he’s stealing the ball, offensive rebounds. Some players in college basketball, when they get an offensive rebound, it’s a mystery what’s going to happen. With Mitch it’s not a question, many time he’s going to put it back if he’s got some leverage.”

The plan for McGary’s playing time was obviously the subject of much deliberation by the coaches and continues to be going forward into the Puerto Rico Tip-Off. Beilein said the plan at Iowa State was to play McGary about half of the game — he played 22 minutes, which is about right. Beilein said his playing time would be “similar” in Puerto Rico, but added, “You never know what it’s going to take to win the game, too.”

Ultimately what a team learns after a loss, especially early in the season, is which leaders are going to step up and set the tone for the next game. Young players can respond to losses in all kinds of ways, and it will be up to Michigan’s leaders to define what their attitude needs to look like.

Going into a tough tournament field in Puerto Rico, where Michigan will be looking at playing a lot of games with little rest, Beilein is now trying to figure out which players are going to step up into a leadership role after the tough loss in Ames. He isn’t too worried.

“I think we’ll find out more today how they respond,” Beilein said. “There are a couple meetings I’ve set up with different guys just to see how they feel, what they could have done in that capacity. I think that’s going to be not a concern, I think it’s a tremendous opportunity for young men to grow into those positions in both victory and defeat. There are great opportunities in defeat to speak to leadership.”