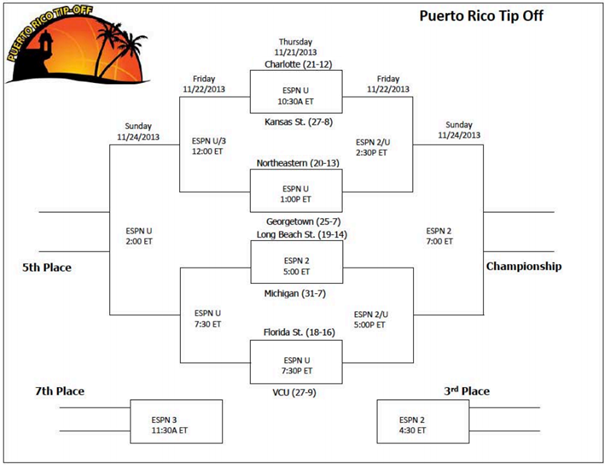 Michigan heads to Caribbean this week for three games in four days at the Puerto Rico Tip-Off. The tournament should be one of the more balanced preseason tournaments of the fall and tips off on Thursday at the Coliseo Roberto Clemente in San Juan.

The Wolverines will open the tournament Thursday evening against Long Beach State before facing the winner or loser of VCU-Florida State on Friday. The final day of games will take place Sunday when the Wolverines will face Georgetown, Kansas State, Charlotte or Northeastern.

The trip to Puerto Rico will provide the Wolverines a chance to forget about the early loss to Iowa State and bounce back against some quality competition. Here’s a first look at the event and what to watch for from the Wolverines. (Photo: Dustin Johnston)

Georgetown looks like the favorite to come out of the top half of the bracket but Kansas State should be able to give them a run for their money.

Both teams have to win their openers but this would be a big time November matchup. The Rams are ranked in the top-ten and will be hungry to avenge last year’s NCAA tournament throttling. We like VCU to get past Florida State given the Seminoles turnover woes. Florida State has given the ball away on 24.3% of its offensive possessions, 333rd in the nation, and is facing the best program in the country at forcing turnovers.

Michigan-VCU would be a huge test for Derrick Walton, who has shown some early tendencies to give the ball away, but also the other guards and wings on Michigan’s roster. Spike Albrecht, Nik Stauskas, Caris LeVert, Glenn Robinson III and Zak Irvin would all have to assume some extra ball handling responsibilities against the Rams. It will be a difficult test but if Michigan can value the ball against VCU, it will probably be able to value the ball all season long.

The Rams lost starting guards Darius Theus and Troy Daniels but return three starters in the frontcourt – Juvonte Reddic, Treveon Graham and Rob Brandenberg – and the best pick pocket in the country last season, Briante Weber, has stepped into the starting lineup.

LeVert, Robinson looking to bounce back

Caris LeVert and Glenn Robinson III both have shown flashes of brilliance in early season play but have struggled to find consistency. Robinson totaled 33 points in Michigan’s first exhibition while LeVert led the Wolverines in scoring after two games. Neither player had their best game at Iowa State, combining to go 6-of-23 from the field. Both players need a big performance under their belts to regain confidence and Puerto Rico could be the perfect opportunity.

Robinson had 14 points and nine rebounds against VCU in the NCAA tournament last year and was Michigan’s most efficient player in the win. Long Beach State has struggled to defend the rim this season, allowing opponents to make 58% of their twos, which could help LeVert get back on track.

Mitch McGary returned to action on Sunday, playing 22 minutes in Michigan’s loss to Iowa State, but he had just been cleared to play. McGary had just one full practice under his belt and John Beilein reported that the 6-foot-10 center was meant to play roughly half the game.

With three games in four days, it will be interesting to see how the Wolverine coaches utilize McGary. McGary was dominant against VCU in the NCAA tournament last season, tallying 21 points on 10-of-11 shooting with 14 rebounds, and the Wolverines will certainly want to unleash his talents if they are matched up with the Rams on Friday.

John Beilein is left to balance the fine line between too much playing time and not enough. McGary changes the complexion of Michigan’s offense, adding a dimension that’s otherwise nonexistent with Jon Horford or Jordan Morgan in the middle. McGary-centric offense isn’t going to come overnight and the lineup needs reps with McGary in there to develop timing, spacing and more. But that need has to be balanced with McGary’s health. How many minutes can you ask him to play in a condensed tournament schedule like we’ll see in Puerto Rico?

Michigan shot the ball poorly at Iowa State and hasn’t shot the ball great all season: 48% on twos and 37% on threes. What’s wrong? The sample size is still small but here are two places to start.

Two-point jumpers are not

Michigan is taking a few more threes (41% 3PA/FGA) but the big reason for the increase in 2-point jumpers is the inability to get all the way to the rim. Michigan has players capable of getting all the way to the rim in Nik Stauskas, Caris LeVert and Derrick Walton and needs to focus more on that. Just 18% of Michigan’s field goal attempts have come at the rim this season, down from 28% a season ago, where Michigan is shooting 91%.

Michigan’s interior defense looked pretty good in its first two games but the competition level wasn’t there. Against Iowa State, the Wolverines struggled.

Michigan has never been a great shot-blocking team (the Wolverines haven’t ranked better than 226th in block percentage since 2008) but managed to field a passable interior defense in each of the last two seasons. One of the keys to Michigan’s interior defense has been taking charges.

The Wolverines don’t have the length and athleticism to block shots from the help side so they’ve relied on getting into place and drawing charges. That hasn’t worked this season, mostly because almost every block-charge call is being ruled a block due to new NCAA-mandated guidelines that require a player to be set before the offensive player leaves the ground.