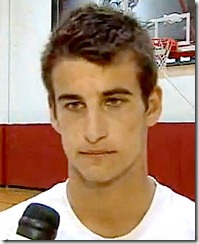 Two years ago, Austin Hatch was almost killed in a plane crash that took the life of his father and step-mother. Since then, he’s been recovering from his significant injuries in Fort Wayne. This summer, it became apparent that Hatch needed a change in location in order to continue his miraculous recovery to get back on the basketball court — Fort Wayne had been supportive, but lacked some of the resources Hatch required. Hatch turned to Loyola High School in Los Angeles.

Hatch’s uncle, Michael Hatch, lives in the area and was willing to take him in for Hatch’s final year of high school. Jamal Adams, the varsity basketball coach at Loyola High, received a call from Michigan coach John Beilein regarding the possibility of Hatch playing for his basketball team.

“I was in St. Louis working at one of the Nike All-American camps and Coach Beilein and I kept playing phone tag, and finally we were able to connect,” Adams said during a press conference held in Los Angeles on Wednesday. “And his first statement to me was, ‘I have one question for you.’

“He asked me if I wanted to participate in a miracle.”

Adams decided he did. And now, Hatch has made the transition from Fort Wayne to Los Angeles in the hopes of continuing his interrupted high school basketball career at Loyola before moving on to Michigan.

It’s clear, even this early, that Adams made the right call in taking on Hatch.

“I really think he’s been a blessing in my life,” Adams said. “He’s really given me a great amount of perspective as it relates to high school sports and really the human spirit.”

Last week, Hatch signed a belated, but official, National Letter of Intent to play basketball for Michigan. For him, it was the culmination of a long-held goal, and basketball was the impetus for his motivation to get there.

“Signing with the University of Michigan has been a goal of mine basically since I woke up from my coma,” Hatch said. “Last week it was kind of surreal to actually see my name on the dotted line and to actually become an official part of the Michigan basketball program. I can’t tell you how blessed I feel to be in that position.

“Basketball gave me something to shoot for. Academics are my number one priority, but the basketball was just having a goal,” Hatch continued. “I realize how lofty it was. There were times when I couldn’t walk. From when I was in a wheelchair I was telling people I would play basketball. Being in a wheelchair and hearing a kid talk about playing basketball, the chances seem remote. But I’m going to get there. My time is coming soon.”

That is the big question for Hatch. Adams said the senior is not yet ready to play high school basketball, but hopes that he will be this season. When will Hatch realistically be able to play basketball at a Division I level? Will that time ever come? These questions are all up in the air at the moment, but Hatch has resolved to keep working.

Hatch is not ignoring the possibility that he will never be able to play Big Ten-level basketball. He has already had frank conversations with Beilein regarding what his role on the team outside of playing could be. The constant in all these talks: Hatch does not need to worry about his scholarship.

“Coach Beilein, I signed my national letter of intent last week, he wouldn’t still be honoring my scholarship if he didn’t see that I have a role on that team that would help them win basketball games,” Hatch said. “I haven’t talked about what my role’s going to be specifically, but he said, ‘Austin, whatever you’re able to do. Whether that’s being a manager, be a practice player, whatever, you’re here on scholarship no matter what.’”

It has been a long road back for Hatch, and the progress he’s already made is stunning. Standing at the podium addressing the media, he looked composed and confident, even if a mild stutter betrayed a bit of understandable nervousness.

There is no doubt that Hatch will be a productive member of the Michigan basketball program no matter what capacity he finds himself in.