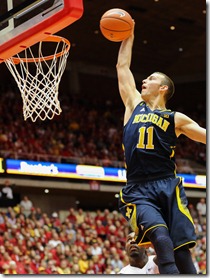 Our weekly feature tracking the performance of Michigan players performance over small segments of the season returns for 2013-14. (Photo: Dustin Johnston)

Taking into account Michigan’s first three games, Nik Stauskas has been the most consistent player on the roster. ther than a so-so performance against UMass Lowell — in which Stauskas was still aggressive going to the basket, shooting eight free throws — he scored 23 and 20 points, respectively, in Michigan’s games against South Carolina State and Iowa State. But it’s not just the point totals that stand out about his game thus far — it’s the confidence he has in his ballhandling and his aggressiveness getting to the rim. With a combined 11 assists and 10 rebounds over the past two games, Stauskas is also showing Tim Hardaway Jr.-esque versatility.

Outside of Caris LeVert’s poor performance against Iowa State, the sophomore has had a stellar beginning to the 2013-14 campaign. In Michigan’s first two games, LeVert went off for a combined 41 points and hit for six of his seven 3-point attempts against South Carolina State. But while LeVert has looked great against the cupcakes, he looked shaky against Iowa State, Michigan’s first real competition. Though he played a surprising 37 minutes, LeVert only managed five points on 2-for-9 shooting.

It’s tough to expect much more out of a freshman point guard. Derrick Walton has been solid in his first three games as a Wolverine as he continues to figure out his role and become comfortable running the show. His turnover numbers (he turned it over three times each against South Carolina State and Iowa State) and perimeter shooting (2-of-10 from 3-point range) aren’t where they need to be quite yet. That being said, Walton looked good driving to the basket on Sunday and he’s doing a great job of finishing, making10-of-14 twos this year.

After positively feasting on the weak inside play of Michigan’s first two non-conference opponents — his rebounding percentage numbers are absurd — Jon Horford managed five boards in 15 minutes against Iowa State.  With the return of Mitch McGary, Horford may see his minutes slightly cut down, but he still has time to prove he can be a viable post-up option — and that he can catch the ball and finish at the hoop.
Glenn Robinson III: 6.5
Robinson has showed his athleticism and rebounding but has struggled to find his three point shot. His consistency on offense has been up and down as there have been some growing pains during the transition to a bigger role offensively.

In his first game back, Mitch McGary looked like his old self. The 6-foot-10 forward grabbed six rebounds, notched four steals and scored nine points in 22 minutes in Michigan’s loss to Iowa State. It’s been a long road back for McGary, and it will continue as he gets his feet wet this season in Puerto Rico. What fans want to see is an improved ability to create his own offense, whether it’s through his face-up game or back-to-the-basket. But for now, Michigan fans can expect McGary to be brought along slowly as he gets back into basketball shape, which he clearly wasn’t on Sunday.

Spike Albrecht’s usage rate this season is almost non-existent at 11.2 percent, but he’s lethally efficient. After only playing four minutes against South Carolina State he was quite good against Iowa State: the sophomore notched seven points on three shots and three assists in 13 minutes. Overall, he was aggressive going to the basket and created opportunities — if he keeps playing like that, he’ll find playing time. Albrecht also continues to impeccably take care of the ball — he doesn’t have a turnover yet this season.

Michigan’s highest-rated freshman prospect has struggled in limited minutes so far, but he’s shown flashes of good shooting. He scored 10 points against UMass Lowell, but against Iowa State he played only 13 minutes and didn’t have much of an impact. Irvin has all the talent in the world and it’s safe to assume this is just a matter of getting his feet wet and a freshman adjusting to the college game.

Jordan Morgan hasn’t seen the court much this season, and with McGary back in the lineup, it’s hard to see how that trend will reverse. He’s playing about a quarter of available minutes and only played four against Iowa State, though Beilein said in retrospect he would have played the redshirt senior more.